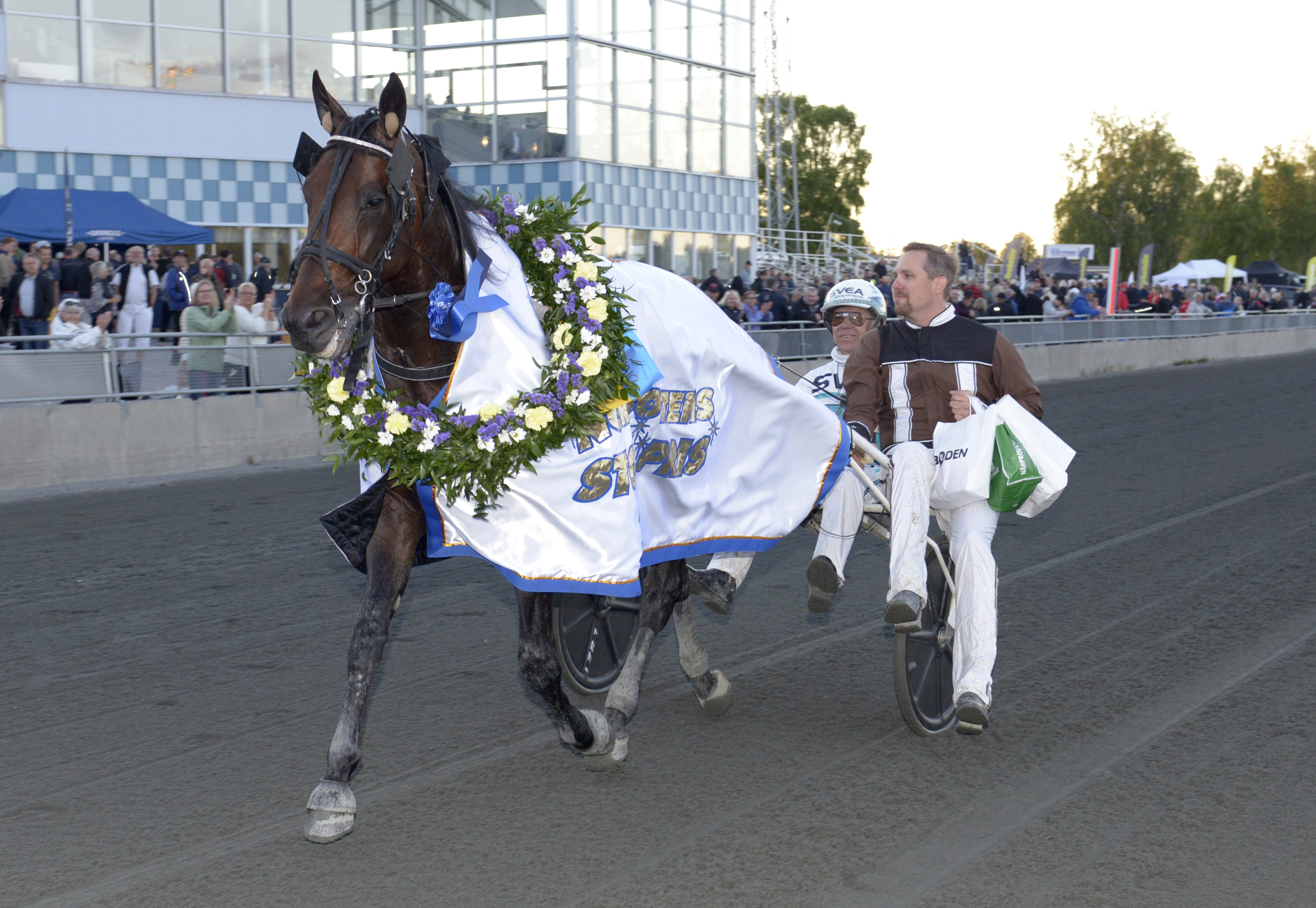 Propulsion (pictured) likes it in Boden.
Late Saturday night he won Norrbottens Stora Pris - for the third year in a row.
"This horse in incredible" said winning driver Örjan Kihlström.

Elitlopp runner up Propulsion seems to like the northern air and the midnight sun. When Boden held it's annual V75® in front of a record crowd (11,090) the horse exceeded all expectations. From a tricky post ten in the second tier behind the gate he got away among the last and in the second turn Örjan Kihlström decided to make a move. And what a move it was.
"The pace up front was way to slow for us to have a chance from way back so I had to make a move even if I understood Ulf Ohlsson wouldn't let us go" said Kihlström.
Outside of leader Arazi Boko was Ulf Ohlsson with Nadal Broline and after a quick brush the horses entered the final lap with Nadal Broline in front and Propulsion on the outside. Hometown hero Makethemark was stalking Propulsion and looked like a possible winner in the final turn just as the leader faded but Propulsion was unbeatable and won easily.
"I had to ask him for some speed in the middle of the race and that always costs you in the end but he's incredibly strong and never quits. He's one of the best horses in the world" said Örjan Kihlström.
The trainer of Propulsion, Daniel Redén was ecstatic after the victory and wanted to embrace the entire crowd.
"I think Propulsion might have to move up here to try to make it four in a row" said Solvalla based Redén.
Makethemark finished second and Arazi Boko finished well to capture third. The winning time over the 2,140 meters was 1:11.4 and the winner received SEK 1 million. That puts Propulsion's earnings over SEK 16.5 million.

Finnish joy in the winner circle
Propulsion was mega favorite on V75 but an even bigger favorite was Very Kronos in V75-1. He could not live up to the expectations and fell back in to his old ways and made a break in the first turn. That left Mike Haapakangas trained Mr Golden Quick alone on the track. Down the backside Santtu Raitala attacked three wide and he turned the field inside out in the final to win by open lengths. Then the winner circle was invaded by the happy owners.
"Fins usually show when they are happy" said Veikko Haapakangas - son of trainer Mika and continued:
"He's an incredible horse. He showed his class two starts ago at Solvalla and now we just have to keep going".

Triple for Melander/Lundström
Per Lennartsson has a very exciting mare, the Dutch born Fame Boko. She took her second win in the second start for Solvalla based Lennartsson and it was a five star effort. When the field went out on the last lap, Lennartsson went three wide and the six year old mare showed she was simply the best.
"It wasn't the best trip but she impresses me more and more" said Lennartsson.
In the Class II race, Stefan Melander trained Cargo Door showed that his flat effort in his last start was an exemption when he won despite being parked on the outside.
"He was very impressive there in a few starts and then he was no good in his last start but tonight he was very good again" said Örjan Kihlström.
Stefan Melander could also watch Dice Man win the Bronze divison with Björn Goop driving and in the Silver division his girlfriend Catarina Lundström got the win with her Qahar Q.C. together with Ulf Ohlsson after an exciting stretch drive.
John Mogset trained Pave Faks won the cold blood race together with Ove A Lindqvist.