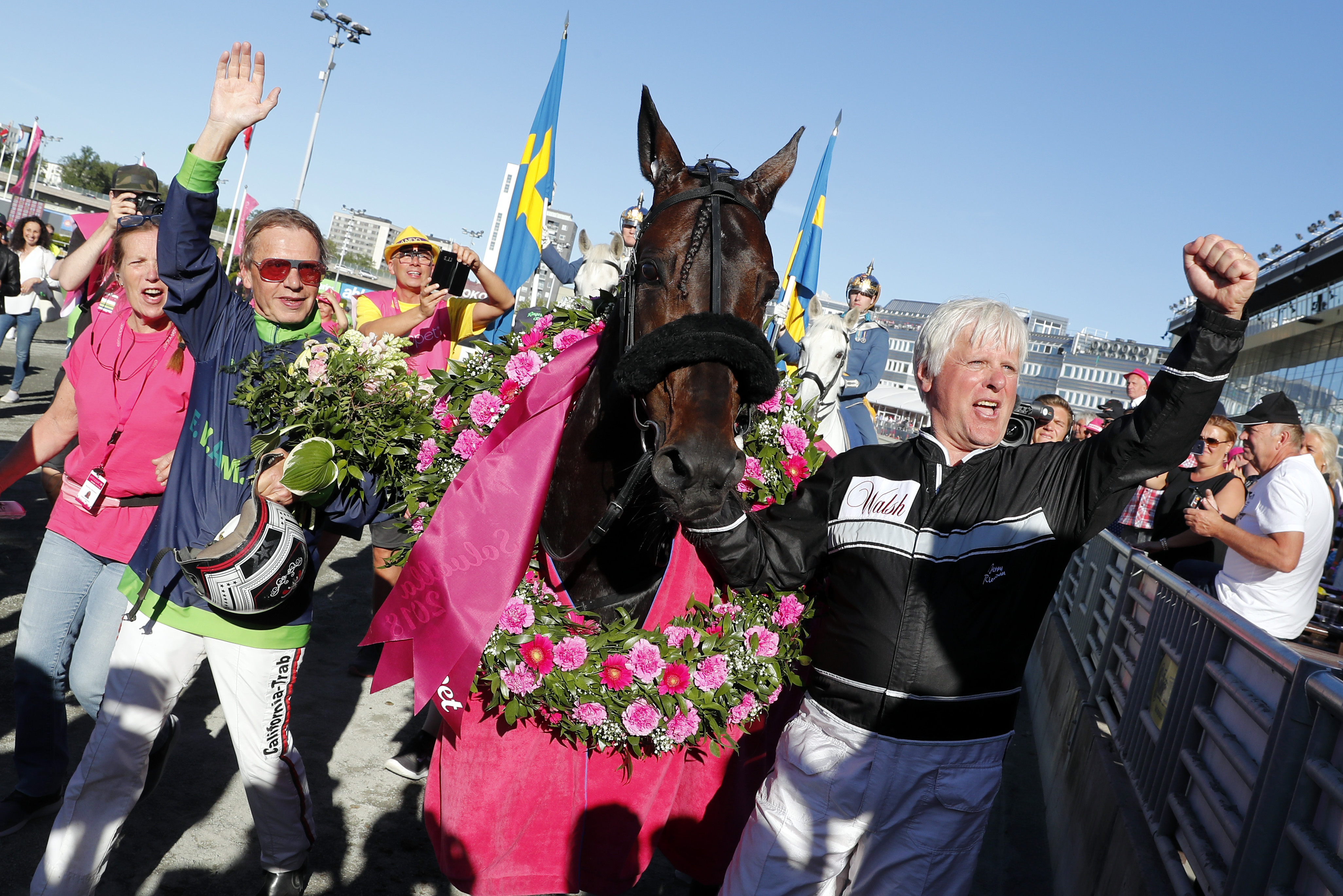 Propulsion is chasing his fourth straight victory in Hugo Åbergs Memorial.
One of his opponents who can stop him is Ringostarr Treb - who won the post position draw and will start from the best possible post one.
"My horse is absolutely in good enough form to win the race, even if Propulsion is tough" says trainer Jerry Riordan.

On Thursday night, just after nine o'clock in the evening, in the sunset, it's showtime at Jägersro. That's when it's post time for Hugo Åbergs Memorial, also called 'The Elitlopp of the summer'. The distance is one mile - 1,609 meters and the first prize this year has been upgraded to SEK 1,609,000.
The Åbergs night at Jägersro is always a something special to experience live and there's also a V75 card at Jägersro on Tuesday night. The favorite to win this year's edition of Hugo Åbergs Memorial is once again Propulsion. Daniel Redén's star trotter is chasing his fourth consecutive win in Åbergs, which would be unique. But he will start from post nine in the second tier behind the gate.

"I would be surprised if Pastore Bob will fight us for the lead"
A horse who won the draw is Ringostarr Treb. The Elitlopp champion from last year hasn't had things go his way in the last starts following his brilliant seasonal debut. In his most recent start he got disqualified for interference in Oslo Grand Prix. Two years ago he finished second to Propulsion in Hugo Åbergs and trotted 1:08,2, which is his lifetime best. He's got his chance for revenge now, starting from a perfect post one behind the gate, being that he can leave very quickly. Wim Paal will do the driving as usual.
"Ringostarr Treb (V75-6) drew a perfect post position and he can leave quickly. I would be surprised if Pastore Bob will fight us for the lead, I don't think he's been that good lately. My horse doesn't need to race in the lead but when you have post one you don't have much of a choice" says Jerry Riordan.
"He will race in a brand new American sulky and barefoot all around. Then you know when Propulsion is in the race, it's never a walk in the park. It will be tough. You should also keep in mind that my horse is not as good as he was when he won the Elitlopp. That's when he peaked, bt he's still good enough to win if he gets a good trip. I'm happy with his form and he is where he needs to be".
"He could lead the race until the top of the stretch and then we'll see. He's got a decent chance to win, even if Propulsion is very good. If this goes well, we'll go to Sundsvall Open Trot for his next start" says Riordan.

"I give my horses a lot of electrolytes in this heat"
There's been a heat wave in the country for a little while with extremely high temperatures. How do you as a trainer handle the heat with the horses?
"It doesn't help when it's this hot. A horse's preferred temperature is 8 degrees celsius. They have to drink a lot of water. I also give my horses a lot of electrolytes that I buy from a company in Malmö. They're good and they make the horses thirsty so they will drink more. If they don't there's a big risk of them dropping in form" says Jerry.

"Zabul Fi is good - only one I'm worried about is Tae Kwon Deo"
The Halmstad licensed trained also has an interesting horse in the first leg of V75, Zabul Fi who also drew post one behind the gate. In his last start he finished third behind Pinto Bob in a four year old race in Eskilstuna.
"Zabul Fi (V75-1) is a very good horse as you've seen in these two starts he's made in Sweden. He can leave quickly and I think he can hold up the lead. In his last start he got too hot so we will open up his bridle and change the bit for this start. He will race barefoot all around and in an American sulky".
"My horse is good but I think Tae Kwon Deo is a better horse. For my horse to win he needs to get a few lengths in the lead and for Tae Kwon Deo to sit third or fourth over. If my horse sits in the lead I'm mainly only worried about Tae Kwon Deo" says Jerry Riordan.