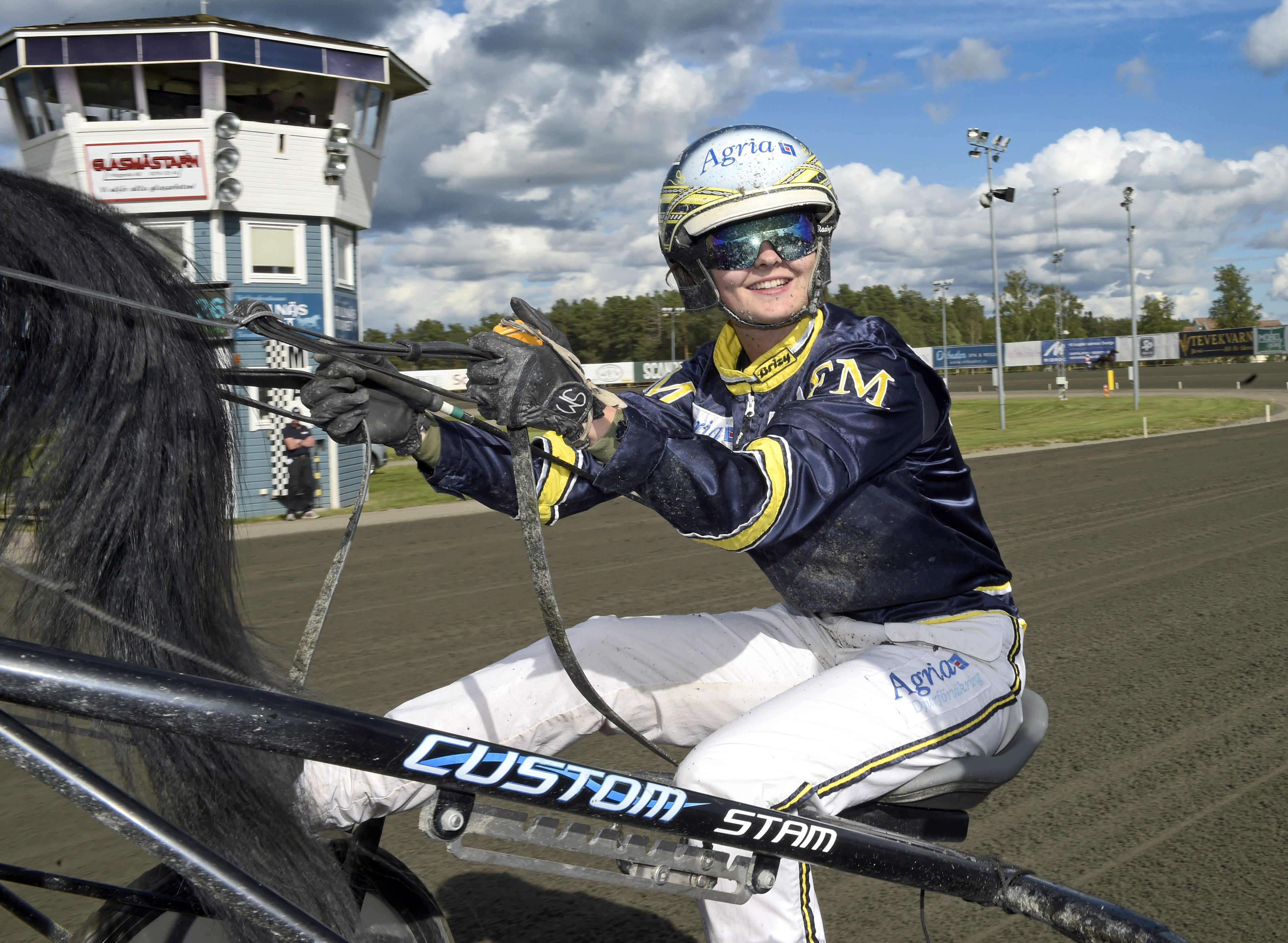 V75® (Saturday/jackpot): Felicia promises to celebrate if she wins again

She quit working with horses full time a year and a half ago and started working as a care assistant. She also found love along the way, which is the reason she is going towards her best year driving so far. On Saturday she is chasing this summer's and her career's second V75 victory as it's time for a jackpot V75 card from Bergsåker.
"It was so much fun winning on V75 and the way it happened didn't make it any worse. I won despite making a break in the start" says Felicia Molin.

She has worked for trainers like Per Lennartsson, Sofia Aronsson and Thomas Uhrberg, but a year and a half ago she got tired of the life as a horse groom and moved from Munka-Ljungby in southern Sweden back home to Rimbo, not far from Stockholm.
"I wanted to try something else even if quitting completely with horses was never an option. My parents Solveig Molin and Thomas B Andersson have horses and I started helping them train right away and I also got a few of my own to train" says Felicia.

Found love
At the track is also where she found love - professional trainer Kristofer Jansson - and they have been a couple since last November. It has been a step up for both of them, on and off the track.
"Both I and Kristofer have surpassed last year's numbers by quite a bit. I have surpassed my old record for driving earnings and Kristofer has surpassed his stable's numbers a long time ago".
"Him and I run the stable and since I work as a care assistant I don't have that much spare time but I don't mind when things are going this well" says Felicia.

"No reason to give up the lead"
Felicia has been seen in the V75 programs much more frequently this year. Last year she didn't drive on V75 at all, while she's made seven starts this year already. V75 start number eight will come this Saturday.
"I get to drive several nice horses both for Kristofer and for other trainers. With that comes experience, continuity and self confidence. Earlier I could go weeks without driving and then you don't stay sharp, but this week I have four drives Thursday - Saturday" says Molin.
It was together with Raja Ribb Felicia broke her V75 maiden at Bollnäs on July 25 and this Saturday on Bergsåker's big day they will get a new chance. Already in V75-1 where they drew post position one behind the gate.
"He is quick out of the gate and he races best in the lead, but my feeling is that he can leave better from a post position a bit further out and I think we might not be able to hold up the lead. If we would, I see no reason to give up the lead. Sitting at the pylons makes him feel tough too though" says Felicia.

"1:10.9/2,000 meters after the break"
That Felicia would like to race him in the lead on Saturday is easy to understand when you look at the statistics - Raja Ribb has taken 11 of his 16 career wins in the lead.
"I've raced him in the lead once before and he won that time. That was in a cheap race, but considering he almost trotted out of the harness before the start last time, I don't think his form could possibly be any better. Someone timed him after the break in the start and he trotted 1:10.9 in 2,000 meters and that was just an awesome effort" says the driver.
Making a break in the start is something that Raja Ribb has done in his last three starts actually, but Felicia has the answer to why that is.
"He is in such good form now that he barely knows how to put his feet down. It's also been volt start all three times and there have also been recalls in all three starts. Starting behind the gate should go much better".
"He raced barefoot all around when he won on V75 and the track has to be absolutely perfect on Saturday for him to do so again. If not, he can't grab the track properly and he's just slipping without shoes behind. I don't think the shoeing is a deciding factor for him, though" says Molin.

Weekend off
After winning V75 in July Felicia had to hurry back to work all night as a care assistant, but should she win again on Saturday she has a better opportunity to celebrate.
"This time I don't have to go to work after the races and should I win, then I promise to celebrate twice as much now. I actually have the whole weekend off for a change" says Felica Molin.