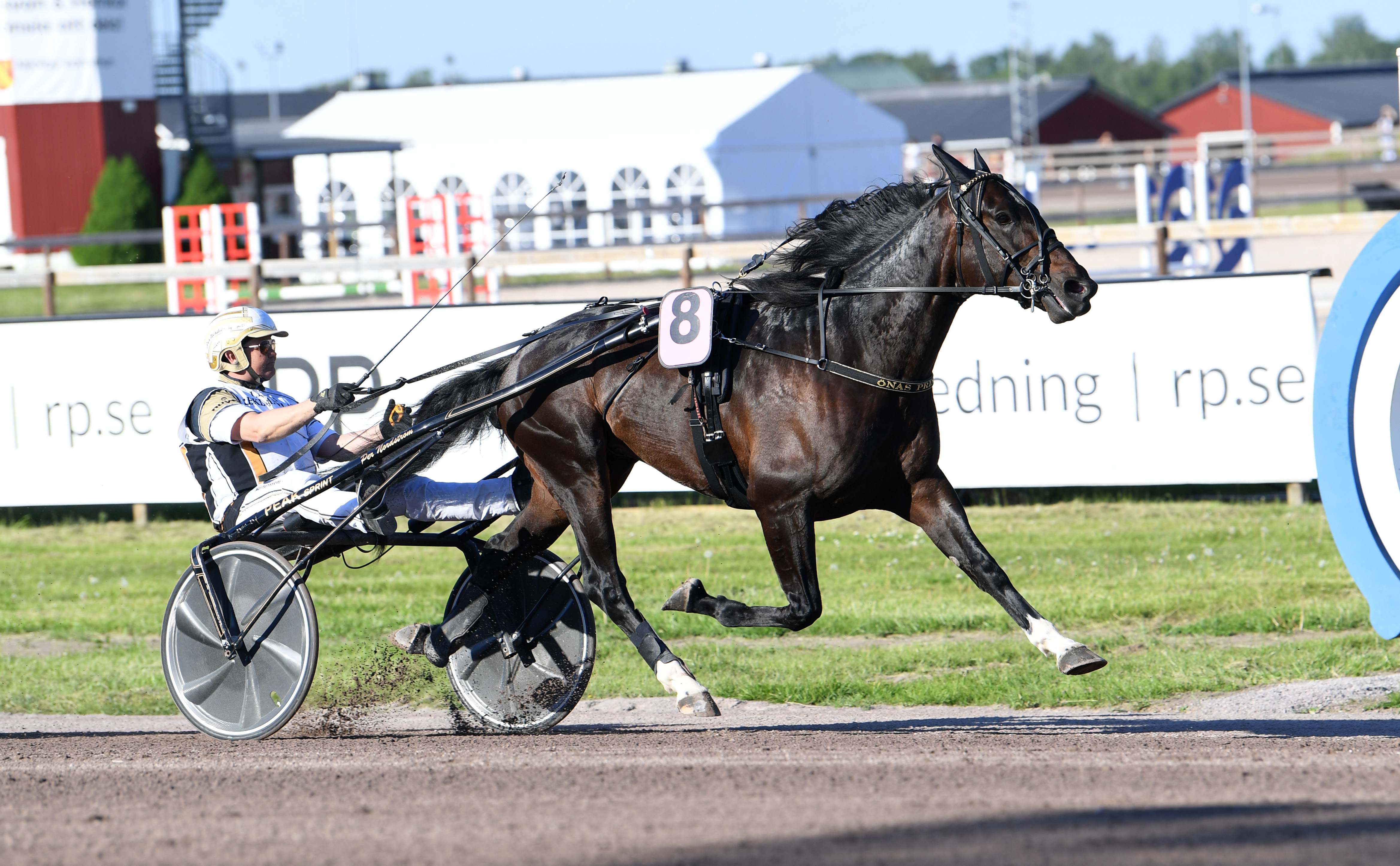 Per Nordström is piling up the big stakes wins.
After the success in last weekend's E3, he now has one of the favorites going into Sprintermästaren on Thursday.
The horse is Önas Prince - who comes off wins in the King's Trophy and Ina Scot's Ära.
"My horse feels like a ticking bomb. He is very sharp now and he just feels great" says Jägersro trainer Per Nordström.

At 21:53 on Thursday evening at Halmstad racetrack, the final of this year's Sprintermästaren will be behind the starting gate. 24 horses divided into three eliminations are battling for the ten spots in the final of the one mile race, often called Sweden's Hambletonian. One of the favorites is Önas Prince who has won both the King's Trophy and in his last start, he also won Ina Scot's Ära at Mantorp. The horse is trained and driven by Per Norsström who has had a fantastic year so far. The move to his new farm in Sjöbo in 2018 has been a huge success for his stable. His horses have delivered in all the big stakes and Per has won Svensk Uppfödningslöpning two years in a row with Revelation and Islay Mist Sisu. And this year Nordström has a splendid record in the stakes races. Besides the already mentioned Önas Prince's victories, he has also won Guldstoet with Islay Mist Sisu and this past weekend's E3 final for colts and geldings with Felix Orlando. He also finished second in the E3 filly final with Good Vibes.
"It was a fantastic weekend for us. The horses were in top form which we had felt in training before the finals. Felix Orlando was very good, even if the winning margin wasn't that big. He had to leave hard and I also had to use him when Robert Bergh came up to challenge us with 1,300 meters to go. Good Vibes jumped for something scoring down and must have stepped on her right front foot then. I saw it after the race and it was very good of her to finish second" says Per Nordström.
"We moved to a new farm which I got to build after my own head and it has worked out fantastic. We bought the land in 2017 and the training center was move-in ready in 2018. At the same time, we have gotten better and better horses to work with".
"I have to say that it feels even better this year than it has before. My two-year-olds this year are of very high quality and we have 23-24 of them which is more than we've had before. The first one is qualifying on July 13 and then we will qualify them one after the other. It feels like all my horses keep progressing constantly and are benefitting from the training in the best way possible" says Nordström.

"Let me go, let me go, let me stride out"
On Thursday the Jägersro trainer could very well enjoy more success. The four-year-old stud horse Önas Prince, who has already made SEK 3 million so far, will be the mega favorite in the first elimination of Sprintermästaren. He has won six in a row and ten out of the last twelve starts. It looks good on paper for the catapult starter who has left very quickly in his last couple of starts. First, he took the lead in the King's Trophy at Åby and held on in a lightning fast finish where they were trotting 1:05-speed down the stretch. And in his last start at Mantorp he just bombed away to the front in Ina Scot's Ära despite starting from post position eight behind the gate.
"Önas Prince is explosive coming out of the gate and he will need that now in Sprintermästaren. You really need to bring your A-game and these races. He actually feels even better than before and he is like a ticking bomb in training. It's like he says "let me go, let me go, let me stride out" when he trains. He is very sharp now and he just feels great".
"He is not only quick in the start. He is also very strong and can come home fast. Sprintermästaren is another sub-goal just like the King's Trophy was. But the big goal this year is the Swedish Trotting Derby at our home track in September" says Per.

"Will not maximize the equipment in the elimination - shoes and a regular style sulky"
First, what are your thoughts on the elimination?
"The post position is good and I will obviously leave hard with him. I don't know how fast Bergh's Mr Brilliant can leave and I'm sure he will try to hold up the lead. But we have all seen how fast my horse is and he should have a great chance of winning the elimination".
"But I won't maximize the equipment in the elimination. He will race with light shoes and a regular style sulky. The sulky is just because he is so sharp now, I want the regular stirrups for my feet. But I think he will make it to the final with that shoeing and equipment".
"But then in the final, he will race barefoot and in an American sulky for the first time. I definitely have a horse who can win Sprintermästaren, but since he has never raced heats before, you just never know for sure. But I think I have a unique enough horse with hearts and lungs to handle that. I won't swear off on that but I think he has all the physical attributes needed to handle it" says Per Nordström.