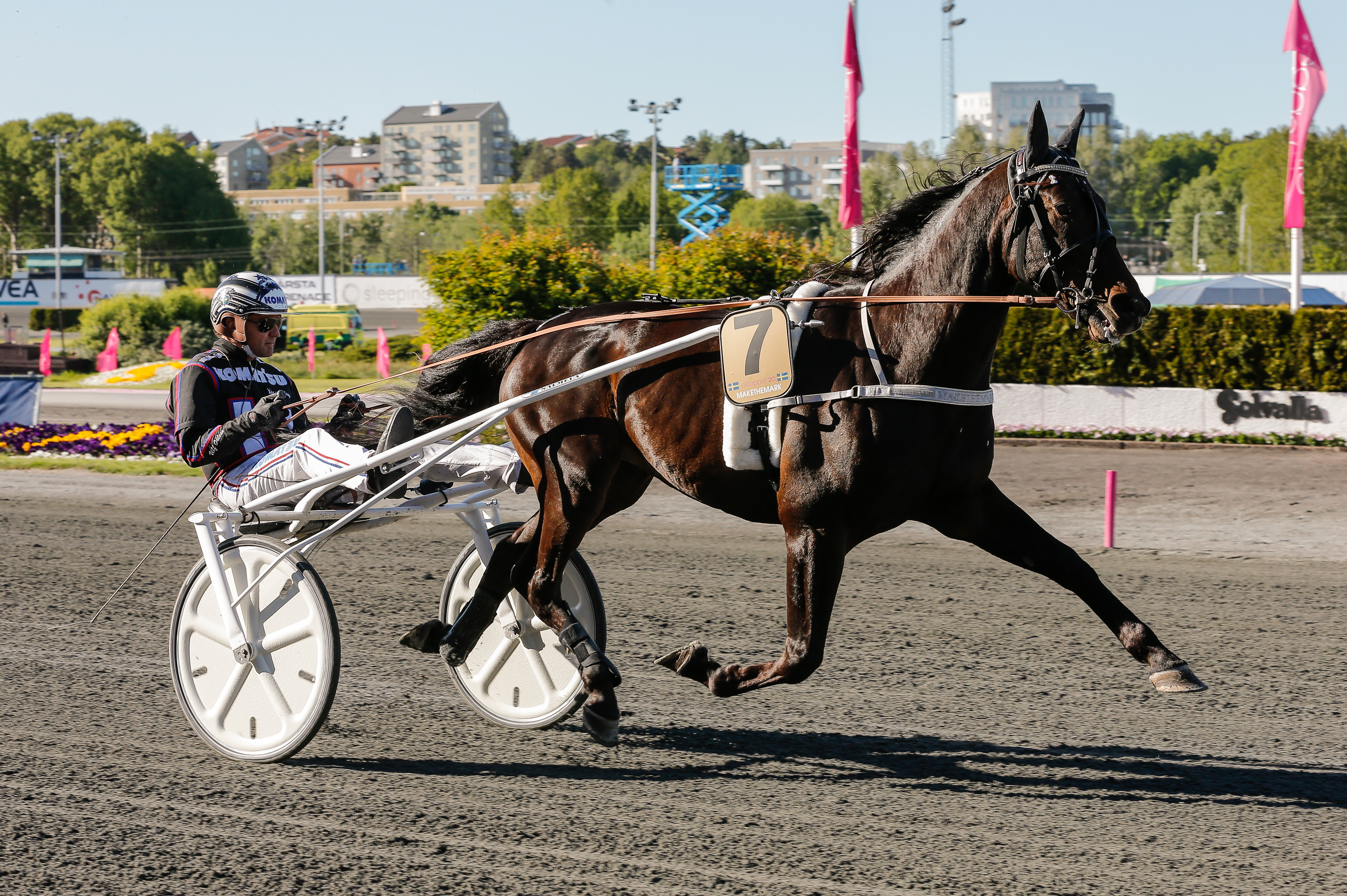 He has finished second two years in a row in Norrbottens Stora Pris.
Could third time be the charm for Makethemark to win the biggest race at his home track?
"My horse feels great and I have a lot of faith in him. It would be great to win this race" says Petri Salmela.

V75® continues up north this week and on Saturday it's time for Boden and their annual midnight trot. Or evening trot to be correct since the post time for the first V75 leg this year has been changed to 7.30 pm since the races have to be held without spectators.
Norrbottens Stora Pris is the biggest race of the year at Boden and the last four year it has been won by Propulsion. The home town horse Makethemark has finished second the last two years behind the impossible Propulsion, but since he is not in the race this year Makethemark has a chance to win. Petri Salmela has, as he always does, entered a whole bunch of horses to his home track's biggest day and he has seven starters on V75. Of course Makethemark is the one catching the most attention and he comes from a start in Elitloppet where never got in the race and didn't make it through to the final.
"3 Makethemark (V75-7) feels great after Elitloppet. You could tell already when the draw came out that it would be tough for him from post seven behind the gate. He sat last the entire mile and like Ulf said it was an impossible task. He also said that no other horse except for Propulsion would have made it to the final from that position" says Petri Salmela.
"In hind sight it's easy to speculate that if he had chosen to follow Racing Mange in the last turn he would have finished fourth. I still think Ulf made the right choice".
"When you watch the race you can see that the horse is trying to go even faster but maybe he couldn't grab the track good enough. We had to build up his feet and we used a different material than what he had last year. You could tell if you watch his gait behind and Ulf said that he couldn't give him his head down the stretch, he had to hold on to him. We will change to the material he had last year on his feet and we'll also add toe shoes behind. That will make him safer behind and we can still go shoeless upfront as usual".

"The vet had no complaints - very pleased"
In the start prior to Elitloppet Makethemark was fifth in Copenhagen Cup but he never got the chance.
"He got locked in there in Copenhagen and his form curve has pointed up towards him being in top form in Elitloppet. Maybe he wasn't 110 percent in the elimination and I think that had he made it to the final he would have been even better there".
"The veterinarian went over him Tuesday after the race and was very pleased. He had no complaints and my horse has felt very good in training after that too. So it feels like his form is just getting better and he should be in top form on Saturday".

"My best chance on V75 - I single him"
Petri Salmela cheered on Sunday evening when he saw the draw for Norrbottens Stora Pris, which is also the last leg of V75. Makethemark was lucky with the draw and will start from post position three together with Ulf Ohlsson.
"That's absolutely perfect. I have a good feeling and I feel calm. You can never be sure when you race at this level, because every race is tough and there are very good horses in this race even if there's no Propulsion. I have a very good feeling and I think he is my best chance on V75 and it will be exciting" says Salmela who also leaves his horse singled out on his 'V75 expert picks' ticket.

"Would have won if he had gotten out earlier"
The Boden licensed trainer has as mentioned entered a bunch of horses to this night which usually attracts a great crowd. That won't happen this year but Salmela has a few horses, besides Makethemark, who are potential winners. Here are his comments on them.
"8 Dwight Sisu (V75-1) has made one start after a long layoff due to injury where he finished third and was very good. Uffe took a slow start and had to chase them. Then he got out a little bit too late, had he gotten out with 300 meters to go I think he would have won the race. He beat Bottnas Easy Cash who finished third on V75 last Saturday. I have been aiming for this race with him after that. I trained him a bit tougher last Friday, 1:19/1,600 meters and he felt very good. Post eight in 'volt' start might be good for him since he's already at the pylons. We have to hope for a high pace and that he can get out somewhere, then he could be dangerous. But keep in mind that he only has one start after his injury and I would have liked to get one more start in him. But he has a good winter of training behind him and he feels very good like I said".

"First time barefoot all around and in an American sulky"
"12 Chintana Bananas (V75-2) made her first start in two months two starts ago and Ulf was happy with her. In her last start we tried her in 'volt' start and she made a break in the start. She could have used an over check but she showed after the break that she's in good form. Without the break she would have had a chance to win that race. I hope she behaves this time but I don't think she can win. I'm happy if she behaves and gets some money here. She might have a chance to end up top three if everything goes her way".
"11 Yankee Blue (V75-3) is a very nice horse who came from Stefan Persson last year and we castrated him and trained him over the winter. He has won and shown the right attitude and in one of the starts he had to show what he's made of, but when the driver showed him the whip he responded right away. In the other two starts he won easily without being asked according to Ohlsson. We have aimed him for this race and we have purposely saved the extra gears barefoot and the American sulky. Now it's time to go all in so the shoes will come off and the American sulky will be on him. Despite post position eleven he should be the favorite and I think has a pretty good chance to win despite the bad post position. He is the type of horse that can win a race from post position eleven".

"Trained very well last Friday - felt great"
"4 Hochthereitis Sox (V75-5) hasn't raced in a month but I trained him tougher last Friday, 1:18,5/1,600 meters and was very good. He's not bad for his class and he drew a good post position. This is a reasonable bronze division compared to many other bronze division races. He is good when he gets a stalking trip and he is not chanceless. He's at least as good my other horse in this race".
"6 B.W.L.Ruthless (V75-5) is an honorable horse who has shown top form lately and has raced well in regular overnights. He has struggled on V75 before but since it's at home we have to give it another try. When I look at the start list I have to say I think he can go with these. He's an honest horse who needs a trip and he can't do too much work himself. The drivers have done a good job giving him those trips and then he's very speedy. In his last start he was last with 400 meters to go and still won the race pretty easily".
"10 Rhapsody Ås (V75-6) is an old and honorable horse who is racing on V75 because it's here at home. If he gets a check we'll be happy" says Petri Salmela.