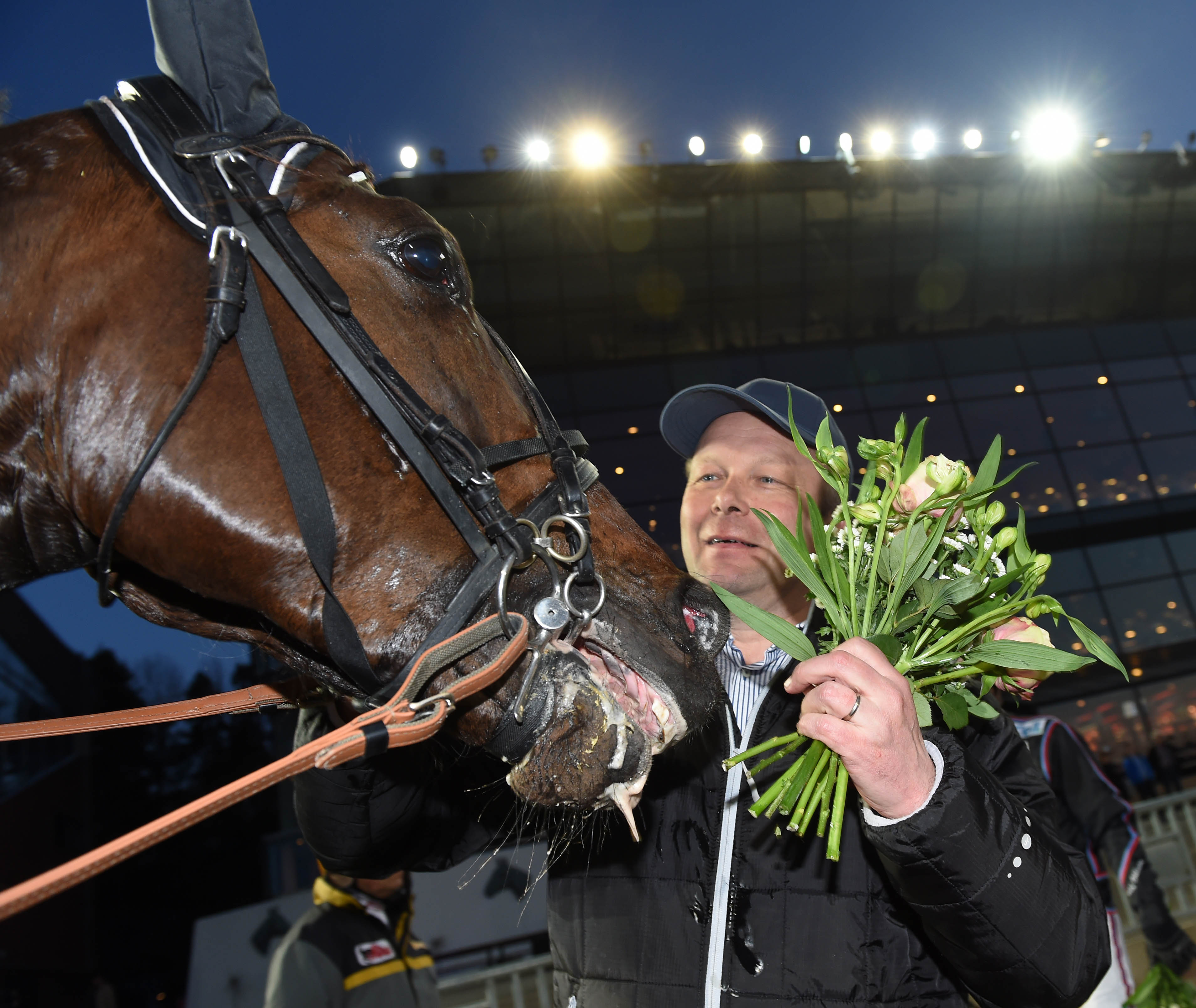 Three starts ago he challenged Propulsion himself.
In his last start Makethemark looked fabulous when he won impressively and he's a hot bid in Jubileumspokalen.
"It's almost unreal how great he feels" says trainer Petri Salmela.

Jubileumspokalen for five year olds with SEK 1 million to the winner will go off as V75®-7 Tuesday night at Solvalla. Last year's Derby winner in Sweden Cyber Lane will be the favorite in this star studded field, but he drew post eight behind the gate. A much better post was drawn by Makethemark who will be one of the toughest opponents for the favorite. Patri Salmela's horse has shown great form as of late and three starts ago he even challenged Propulsion to the wire in Norrbottens Stora Pris. In his last start he completely crushed Policy Of Truth and made it look like a walk in the park. For the third consecutive start he trotted under 1:12 and last start was the first time he raced in the American sulky.
"Makethemark (V75-7) has been fantastic lately and Ulf Ohlsson was very happy with his last start. Erik Adielsson who drove Policy Of Truth was almost chocked and he couldn't believe we could beat him after he was able to call the shots on the front end. But my horse was great and Ulf Ohlsson had the whipped tucked away the entire stretch drive. It was almost unreal" says Petri Salmela.

"Barefoot and American sulky"
"Last start was the first time ever he raced in an American sulky and I was certain he would be fine with it. i wanted to save it for this race but Ulf (driver Ohlsson) wanted to try it out once first and so we did. He also raced barefoot for the second time in his career".
"The combination barefoot and American sulky really gave him the extra speed he needs to able to compete with the best in the world. Our veterinarian looked at the horse after that race and couldn't fine anything major on him. He's felt great in training after that race too" says Salmela.

"Best horse I've ever trained"
Petri Salmela with his license at Boden has a total of 65 horses in training, of which 30 are at his second location Söderby Gård in Vallentuna. Makethemark is stabled there and doesn't have to travel far to get to Solvalla and Jubileumspokalen on Tuesday. A race trainer Salmela really wants to win.
"If we do, it would be the biggest win of my career. I also want to say that Makethemark is the best horse I've ever trained. I always held Plant The Seed as my best horse ever, but I have to say Makethemark now".

What's your dream scenario?
"He's shown many times that he can fly home when he comes off cover. If he can sit second or third over at a high pace, that would be the best possible scenario for him. If he can sit until the last 300 meters he can spot the ma couple lengths and still win it. But if he sits fifth over then he has no chance. When the trot 1:10 for two laps, you just can't make up those lengths".

How about shoeing and equipment?
"He will go like last time - barefoot and in the American sulky. I believe and hope it will have the same effect again on him. He always races open, he's an honest horse and will always do his best. He still races with stay-in earplugs. I want to wait until next year when he's more stable with the pullouts".