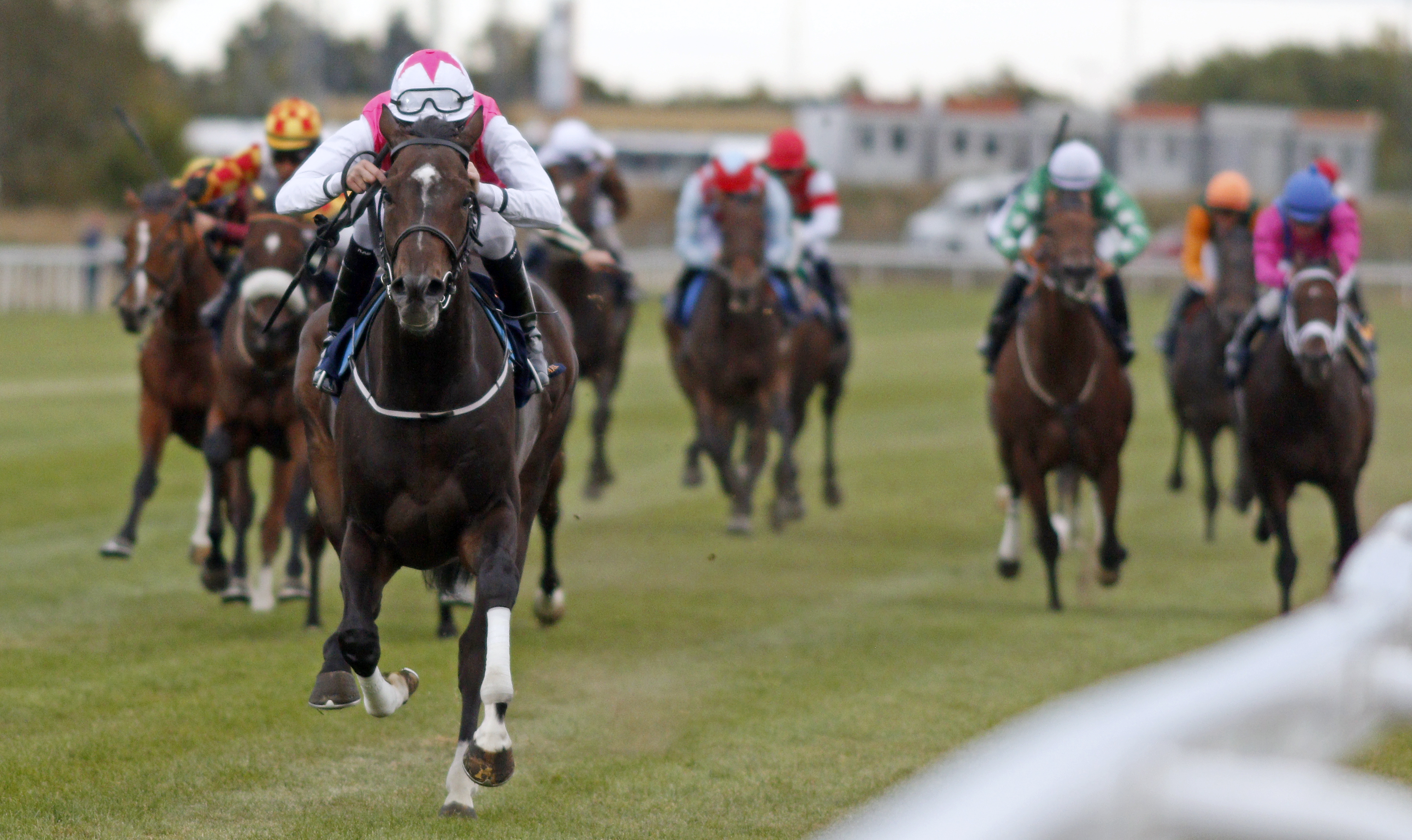 The favorite Square de Luynes pulverized his opponents in Stockholm Cup.
That means thats his trainer Niels Petersen has won this race six out of the last nine years.
"It's insane" says the super trainer.

Square de Luynes was the horse on everyones lips when Bro Park opened up on Sunday.
The four year old came into the race with three straight big victories and was made the heavy favorite.
The bettors proved to be right.
British jockey Robert Havlin rode the horse for the first time and he could breeze to the lead into the first turn. When the other jockeys started chasing along their horses, Robert Havlin was still standing straight up in the saddle and when he asked Square de Luynes to go the French born gelding just exploded and left the opponents with several lengths.
"I didn't have to do much. He had a lot of energy left after the race and I had a hard time stopping him. He wanted to go some more" said Robert Havlin before praising the horse.
"He's still a bit immature but he feels like a good Group II-horse. He's still progressing and he will improve after this race too. There are a few nice races in Germany and France where he should do well".
Niels Petersen who won the Group III-race Stockholm Cup International five years in a row from 2011 to 2015 with Bank of Burden and Without Fear, was unusually shaken up after the victory.
"I know he's good but he got me a bit choked up down the stretch. He's a fantastic horse! I've been in many races and raced a lot of horses, but I've never been as nervous as today. I'm very relieved and it will be nice with a glass of champagne now" said the Norway based Danish trainer.
Square de Luynes owner, Stall Power Girls got SEK 1 million for this win and their horse's earnings are now up to SEK 3.2 million after five wins in eight starts. Freestyle finished second and Master Bloom third behind the superior winner.

Norwegian show also in Nickes Minneslöpning
This year's edition of Nickes Minneslöpning turned out to be very undramatic. Four year old Duca di Como - who actually beat Square de Luynes last year - was in a class of his own. The horse who is trained by Cathrine Erichsen in Norway broke well and held up the lead from the inside and from there he and jockey Elione Chaves left their opponents far behind to win SEK 500,000 impressively.
"We actually didn't want to be in the lead today but when there's no tempo he has to race there like he did today. And he was very impressive" said Cathrine Erichsen.

The iron lady won the hard way
Same amount was paid out to the Wido Neuroth trainee Appelina for her victory in Landwades Stud Stakes. The classy mare ran the entire race in the three path and looked like she would have a hard time. But the last few yards the six year old mare showed why she's nearing SEK 5 million in earnings when she won after grinding them down the hard way.
"She got a tough and wide race but she tries hard as always and then she wins. This horse means a lot to me" said a touched Jan-Erik Neuroth after he came off the horse.
In Bro Park Sprint International the first price was also SEK 500,000 and that check will be sent to Great Britain after last year's third finisher Corinthia Knight battled past the hometown hopeful Ambiance just before the finish line.
"This is such a lovely horse. He's been travelling around the world, he's been to Canada and USA and he gets better when he gets to board a plane" said the jockey Luke Morris about the Archie Watson trained four year old.

Nervous home stretch
In Svelandlöpning for two year olds with SEK 300,000 to the winner the crowd saw an exciting battle down the stretch between the favorite Silent Night and the British invader Old News. The latter one got the nod, ridden by Shane Kelly.
"He did just enough to win so I was a wreck down the stretch" said the winning trainer Richard Hughes.
Turf Mile Final went to Julian McLaren's Manassas (Elione Chaves) and Herbert Sachs Memorial, last leg on GS75®, was won by the German Barrameda Alzola trainee Leo Kalejs (Alan Wallace).
That meant that the payout for finding all seven winners on GS75 was SEK 12,221. For finding six winners SEK 166 and for five winners SEK 21.