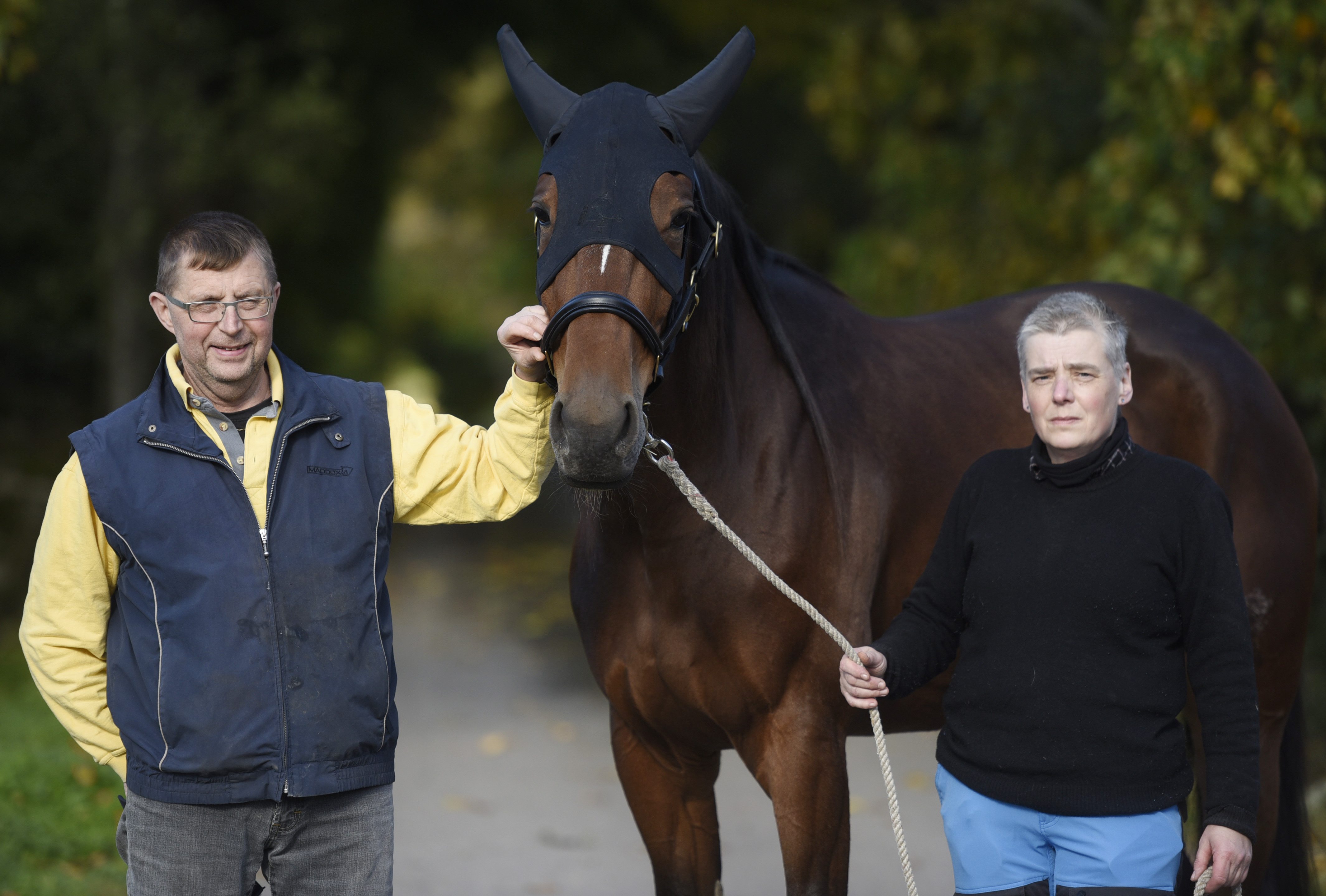 A mare who loves to win and showed that she's tough as nails in the races last year.
She might be missing the speed in her legs to be able to win on V75® right away in the first start of the year but there's no doubt amateur trainer Pär Thole believes in his mare.
"She's a very good horse...an exceptional horse" he says about Ryssebo la Reine (V75-4) whose goal is the Swedish Championships for mares this year.

For 17 years Pär Thole was a manager at Mantorp racetrack, a desk worker who didn't know much about training horses.
But things have changed. In 2012 he acquired his amateur trainers license and today he works full time with the horses together with his girlfriend Ann-Christin Ling.
"I'm happy it turned out this way. I'm living the dream. But it is what it is with five, six hours a day, seven days a week, 365 days a year. We never go anywhere. we're always at home working with our horses" he says.
The couple rents a farm in Hjältevad, between Vimmerby and Eksjö. The farm's name is Ryssebo which they use on their own breedings, where six year old Ryssebo la Reine is the shining star of the stable.
Six wins and four second places is her record after ten career starts.
Last summer she ran in to tougher opponents. That didn't bother her at all. She made a name for herself when she won the final of Diamantstoet on V75® at Åby in August, where the Mantorp trained mare showed how tough she is, beating her opponents despite doing all the job herself.
"I wouldn't be surprised at all if she wins right away on Saturday, but she could also finish outside the money if she can't handle the amino acids this first start back, since she's missing the race speed. I think she's should be on the V75 ticket though, since she's such a good horse" says Pär Thole.

"Anton is very talented"
Experienced driver Kaj Widell did the driving last summer. On Saturday Anton Knutsson gets the chance behind her again.
The 21 year old did the driving when the mare started racing a couple of years ago and he won three out of the first four starts with Ryssebo la Reine.
"The reason Anton gets to drive now when he has the necessary experience for V75 is simply that he's a very talented driver. People will see that if just gets the chance to drive. He has that connection with the animal. He can get them to go without shouting and screaming at them" Thole says.

Can do it the hard way
V75 will be raced at Halmstad this Saturday, with the fourth leg as one of the highlights. It's a leg of Diamantstoet where Ryssebo la Reine with her earnings of SEK 662,000 was assigned the worst post position, post 15 - in the third tier - behind the gate.
According to the trainer, no driving instructions will be given. The mare from Ryssebo farm has shown she's tough enough to do it the hard way and Anton Knutsson can use whatever tactics he sees fit.
"Anton can just drive straight ahead from the start, she can handle being three wide for 700 meters and once she gets up outside the leader she's usually relentless. It depends on how fast they're going upfront, he can also sit with her and let her play out her speed in the end. I'm certain she'll finish top five, but if she'll be first or fifth is harder to tell".
How's her form since she hasn't raced since October last year?
"She hasn't been off, I'll tell you that much. She has missed two training days and today (Monday) she'll jog in the woods instead of training intervals. She's as sound as anyone and she simply can't make breaks. So if anything, I can promise she won't make a break on Saturday!".
She's been successful already but she only has ten starts and the trainer and the driver are both green.
"The driver, the horse and me are all very talented at what we do. But we're also really inexperienced, ha ha. I've only raced once on V75, but then we won SEK 250,000 so that's OK".
You think highly of your mare and you're not afraid to say that the Swedish Championships for mares is your goal for her this year.
"Yes...one of the national championships" Thole says laughing. I don't really know how good she is. She finished second in her last start back in October when Peter Ingves drove her, despite running in. But she was far from tired and trotted 1:12.3. We don't know why she acted that way but hopefully she'll keep her head straighter this time. She was a little bit foot sore, which we took care of. So she'll race with shoes on Saturday. We'll optimize her at a later date".