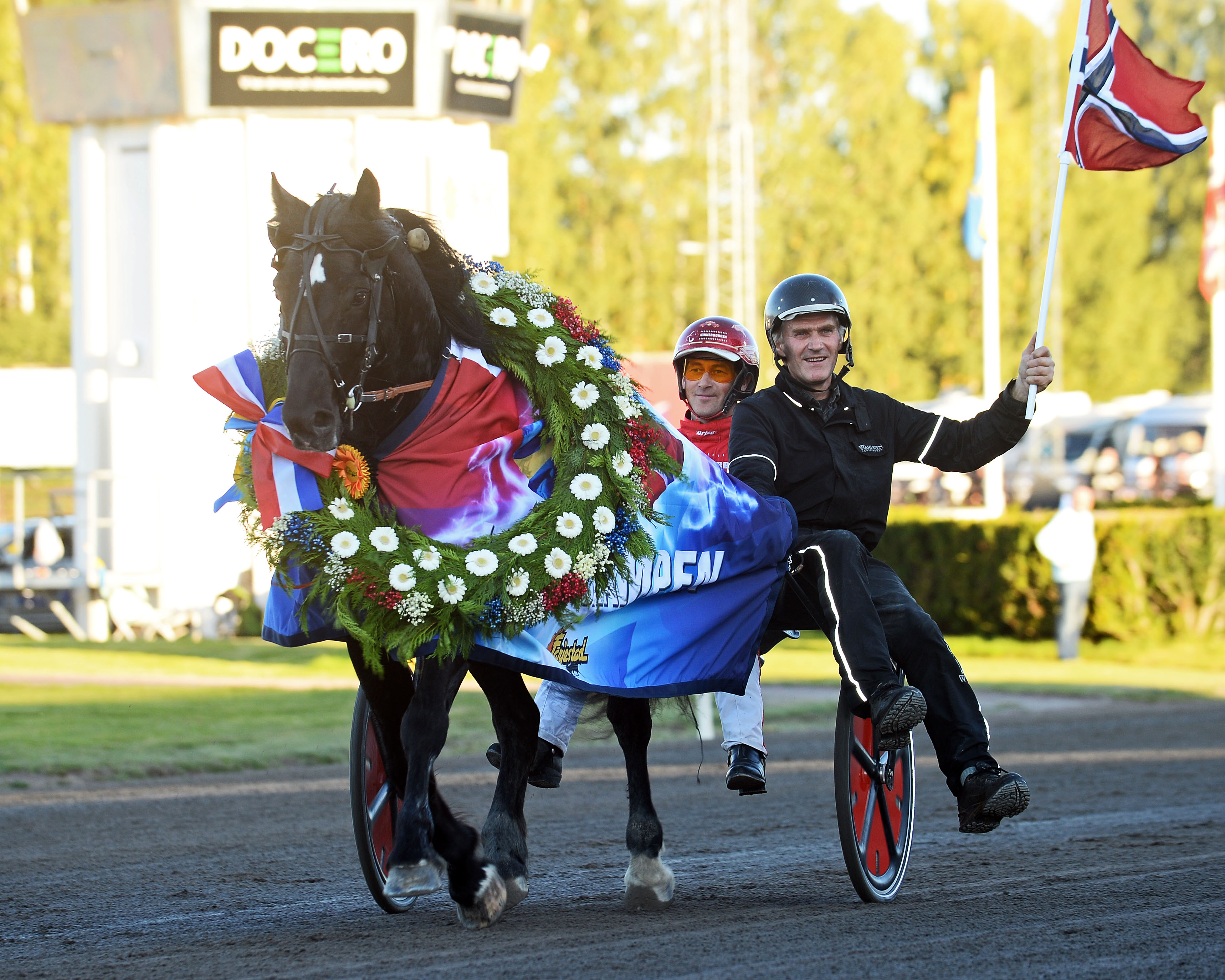 V75®: Aggressive tactics with the king of coldbloods

The best coldblooded trotter in the world will start with a 20 meter handicap on Saturday.
Ten year old Odd Herakles impressed in his first start of the year at home in Norway three weeks ago and the question is which type of tactics will be used in Saturday's V75® race at Bergsåker.
"I think he will be in the lead early" says trainer Lars O. Romtveit surprisingly.

The Norwegian coldblooded star will make the trip to Bergsåker racetrack in Sundsvall on Saturday for his second start of the year. Driver Tom Erik Solberg will see twelve horses quite a bit in front of him already from start in V75®-2.
But the horse is known to be a fast starter and it sounds like that feature will be taken advantage of on Saturday. The Norwegians seem to plan for a knockout with Odd Herakles and sweep the entire field early to get to the lead.
Trainer Lars O. Romtveit is pleased with his horse's form.
"I think the way the race came out with twelve horses on the starting distance and only three horses with a 20 meter handicap looks great. It should help him get a good start and if it goes the way I want, then he will be in the lead early in the race" says Romtveit.
With Månprinsen A.M. out due to injury the Norwegian horse took over as the best horse of his breed in 2019 with wins in both Nordic King in Finland and Unionstravet in Karlstad, Sweden.
In Elitkampen at Solvalla he ran into traffic trouble from his starting position in the second tier.

Pedal to the metal behind the gate
The very speedy Norwegian horse made SEK 2.2 million in 2019 and his fastest race came in Bollnäs in August. That's when Odd Herakles showed that he can really move his feet in Bollnästravets Elitsprint.
Tom Erik Solberg sent him three and four wide as the car left the field and rounded the field from post position 12 in the second tier and went on to win the race in the great kilometer rate of 1:19.0 over the short distance.
Odd Herakles was very good in an easy win from the lead in his first start of the year on V75 in Norway a few weeks ago. On Saturday he will take on a couple of really nice coldblooded trotters. Alf Jonsson's hometown star Ängsborken starting from post position one on the starting distance will be heavily bet down.
Trainer Lars O. Romtevit:
"He is at his best in the lead and I think the driver will try to get him there so that he can control the race. As long as everything is well with him after that he should hold on to win from that position. It's a disadvantage that he can't race barefoot on Saturday but he can handle racing with both shoes and corks, should that be necessary. But he’s at his best when he can race barefoot".

"He was magnificent"
In October he was put away for the year and his first start of 2020 came in February. Since the groom took care of most of the training leading up to his seasonal debut, Romtveit was a bit nervous about the start at Forus.
After the warm up which Romtveit made, the question mark remained.
"But when the driver scored him down before start he was magnificent! He was able to set the pace to 1:25 speed. From the middle of the last turn and through the wire Solberg let him trot what he could and the last 500 meters was trotted in 1:18 speed and even faster the last couple hundred meters. He won very easily".

Will move to Sweden
2020 will be Romtveit's last year as a farmer and trainer the way he is now.
He will retire and Odd Herakles will stand stud full time after having combined racing and breeding for a few years.
2021 the horse will move to Sweden into Bollnäs trainer Fredrik Jansson's stud farm in Järvsö.
"I will turn 70 and I want to slow down. I won't interfere with any decisions regarding the horse but according to what the owners say now they want to let the horse retire when he's still on top and just race him throughout this year, after that he will breed full time" says Lars O. Romtveit.
What can you tell the bettors about your horse for the Saturday start?
"That we put away a sound and healthy horse in October and that he will come to Bergsåker in good form. Not top form, but he feels fantastic in training. He can usually handle going two speeds, one early and one at the finish of the race. The way I see it, he should have a good chance to win".