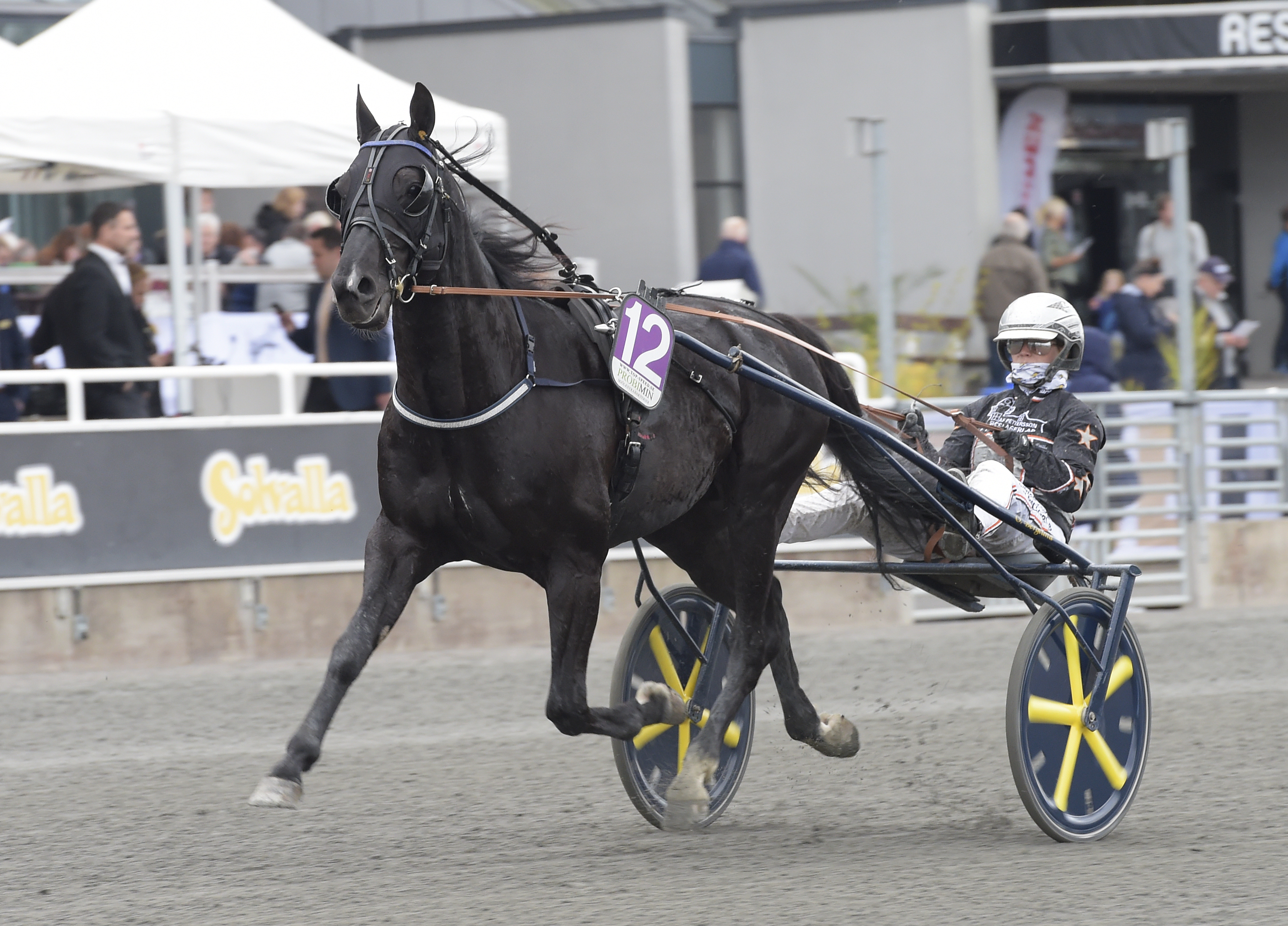 Last year he showed speed that would be enough for any class.
This year he's even better.
With an excellent seasonal debut behind him, Shocking Superman will take on the elite in Guldbjörken at Umåker racetrack on Saturday.
"He really feels like he's in top form" says trainer Oscar Berglund.

Shocking Superman (V75®-5) hadn't raced for six months when he made his seasonal debut a couple of weeks ago at his home track Östersund. Oscar Berglund and driver Emilia Leo couldn't have asked for a better start to the season. From third over the stud horse turned the field inside out after trotting 1:08.5 speed the last 700 meters.
"He's freaky fast and when Emilia pushes the pedal to the metal he can really move fast. He did in his last start and it was great, but you have to keep in mind that he was in against cheap horses and the win itself doesn't say all that much. I expected him to win that race. The most important thing for me and Emilia was the way he did it. The way he warmed up, scored down and raced was a five star performance" says Oscar Berglund who has received more good news regarding his horse after the race.
The horse who was a star trotter already at an early age has been plagued by different problems and after a non existent five year old campaign he was moved to Oscar Berglund. He made a couple of breathtaking efforts for Oscar last year, for instance when he crushed his opponents to win in 1:10.7/2,140 meters in Silverörnen at Solänget, but he still didn't race up to his full potential.
"He has had health problems and he had problems with his blood counts last year. He had to rest and start over again after every start so we didn't have anything to build on. We have figured that out this past winter and after his first start back he's been able to train and take a step forward after the race, instead of going backwards like last year, which is very positive. I trained him today (Tuesday) for the last time before the race Saturday and he felt like he's in top form".

Aiming for Elitloppet
Oscar Berglund has been saying for a long time that Shocking Superman has an incredible amount of talent and it's no secret that the bar is set very high for this season.
"Since he missed the five year old season when horses usually get tougher and grow into the open class, he is one year behind the horses in the same crop. But maybe that means he has more saved in the tank than they do. We have to look at it that way and a lot of things have happened this past winter. He's sounder and better".
What are the goals with him this year?
"It's no secret that both Emilia and I both dream about him being one of the 16 horses in Elitloppet in a month and a half. If it remains a dream or if it becomes reality remains to be seen but if my horse stays sound and healthy he has all the qualities it takes to be there".

"Great speed"
The road to Elitloppet could go through the Paralympic Trot. Guldbjörken in Umeå is the forth and last leg before the final at Åby on April 25 and from post four behind the gate Shocking Superman will be one of the favorites in the race.
"It looks very good on paper. We drew a good post and he's in against horses of mixed caliber. A couple of them stand out and we won the draw against one and lost against the other one" says Oscar and means Perfect Spirit who drew post twelve and the Finnish Elitlopp finalist from last year Next Direction who drew post three.
"I don't know the stauts of the Finnish horse but his past performances are impressive and if he can set the pace on the front end there aren't many horses who can beat him. But I think we will have a great speed to use during the last kilometer. We will see how long it will take us but we will give it a serious try and really go for it. It will be exciting!"

"A lot of ability"
Oscar Berglund has two more starters on V75 and he says that Pleasure For Cash (V75-4) has the best chance of them. The very capable but difficult six year old will make his first start for the Östersund trainer.
"It's a horse I have followed during his entire career. He has mixed incredible efforts with very lackluster ones. He has a lot of ability but he has left a lot of money on the table by making breaks. It's a very exciting horse to have in my stable and the first time I sat behind him got that wow feeling. He feels like a very classy horse and he has conducted himself perfectly in training. He is well prepared and I wouldn't have entered him in V75 if I didn't think he belongs there".
Pleasure For Cash will start from post two behind the gate over 2,640 meters.
"He has perfect conditions here. We were very luck with the draw this week and I think the distance will fit him well. I will tell Emilia to drive like she has a very good horse and then the tactic is up to her. He has trained so well these weeks that I'm very excited to see what he can do in a race".

Longshot with optimal balance
Shocking Superman will as usual race in his American sulky, with blinkers and barefoot. For Pleasure For Cash it will be a hybrid sulky, barefoot behind for the first time since last summer and with blinkers for the very first time . The one of the three Berglund trainees that will race with the most optimal balance is Cobourg Hanover (V75-3). The quick leaver has drawn a dreamy post one behind the gate. Oscar Berglund lays low regarding his chances though.
"He has had his share of issues with sickness throughout his career and just making it to the silver division is good. He's such an honorable horse, a true friend and I can't demand more out of him at this point. He's in against some very good horses and I can't see him winning this, but after having training balance on all winter he will now race with blinkers, pullouts, in an American sulky and he will go barefoot. All that combined with post one over the short distance means that he most likely will race well and with a pocket trip he could be second, third, fourth maybe. For the bettors he could be a fun longshot if they want to look for someone beside the favorites".