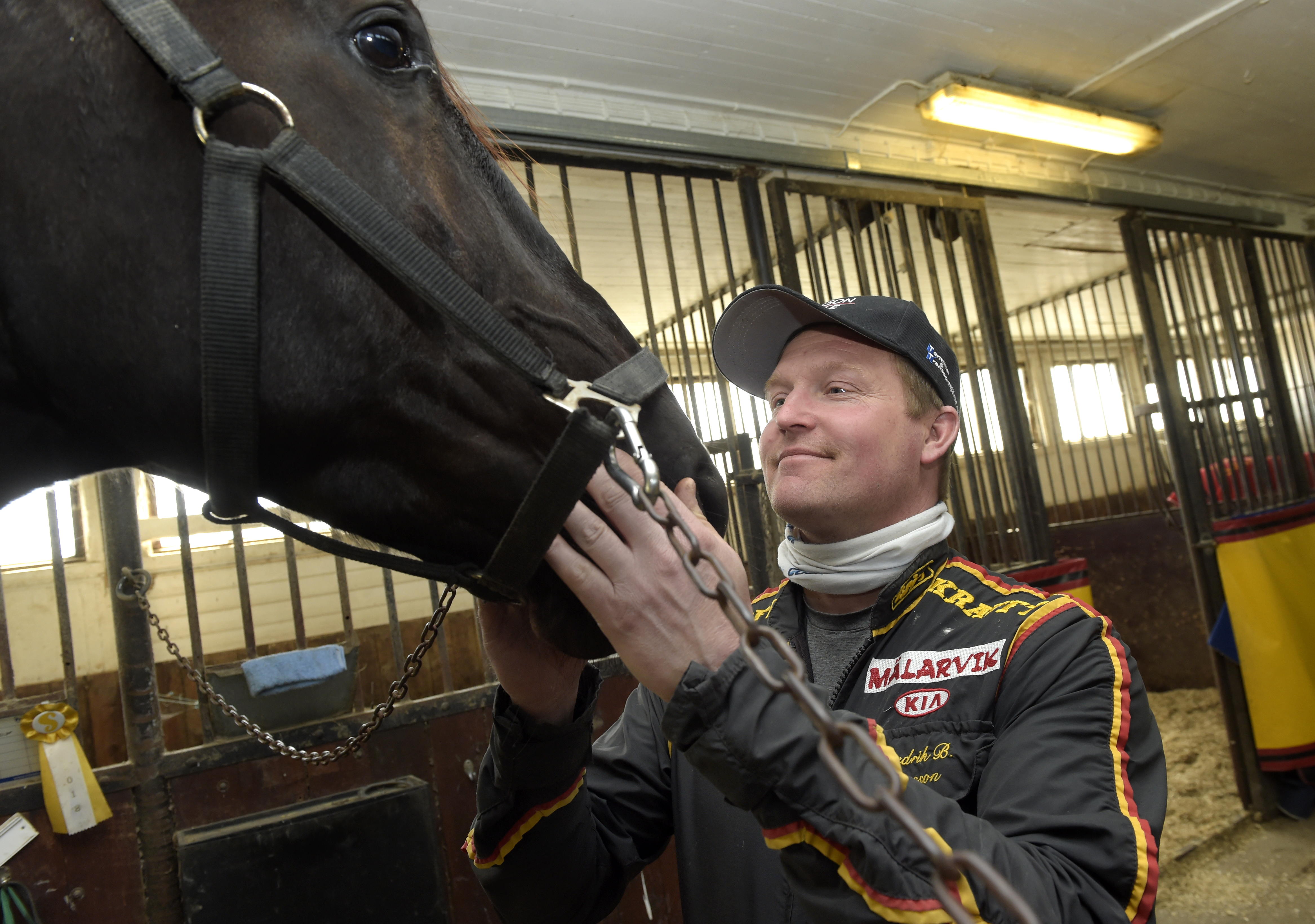 V75® Multi jackpot/Saturday: The new kid on the block is chasing his biggest title.
He finished fifth in Elitloppet back in May but he is still called the new kid on the block.
In the rich Sundsvall Open Trot on Saturday, Fredrik B Larsson's Milliondollarrhyme is once again the interesting young rookie in the elite.
"He has gained some toughness now and has no problems racing against the best".

Solvalla took a chance in inviting an unexperienced hometown horse to this year's Elitloppet.
Five year old Milliondollarrhyme was a chance that turned out to be successful.
He finished fifth in the final and came out of the race with his head held high in what was only his 25th lifetime start.
Fredrik B Larsson has continued to race his five year old against the elite. On Saturday they're giving it another shot in Sundsvall Open Trot with SEK 1 million to the winner and a victory there would of course be the highlight of Milliondollarrhyme's short career.
"I'm sure he could be one of the horses fighting for the win even though I don't demand that of him. The most important thing for me is to give him a nice trip so that he'll finish well. Then we'll see how far that takes him" says Fredrik B Larsson.
On Saturday there's something as unusual as a multi jackpot. ATG® is calculating that a possible sole winner can take home around SEK 100 million now when the jackpot millions have been piling up.
In Sundsvall Open Trot, V75®-7, you might need a few horses on your ticket. The race is of very high class. Former Elitlopp champion Ringostarr Treb looks like the favorite. Jerry Riordan's ace is coming from an impressive win in Hugo Åbergs Memorial.
Fredrik B Larsson drew post position nine behind the gate and can choose to follow either the very quick Ringostarr Treb from post one or Sorbet from post two.
He doesn't want to give his opponents any hints and therefor he won't say much about the tactics.
"Maybe so. But it's also hard to say already now how I will drive on Saturday. I want to train him first this week and maybe also do the warm up before I decide that"

"Could be the best of them all"
Giant Superman and Reven d'Amour are former top horses in the Larsson stable. Milliondollarrhyme is a big horse and needed the three and four year old years to grow into his big body.
"He's the horse with the most ability of all that I've trained. I think he can also the become the best horse I've ever trained" says the Solvalla trainer.
After having been study and just bothersome he was castrated after his first season.
Trainer and part owner Fredrik B Larsson describes Milliondollarrhyme as a very cool horse.
"He's super cool. It's just when he's on the track he can get geared up. In the barn he's very quiet. When he's lying down sleeping in the evening I sometimes go and lay down next to him, he likes that. He's a cuddler".
Milliondollarrhyme is very speedy and also very quick out of the gate and he always does his best in a race.
Fredrik B Larsson has never met a horse who changes character as often as him though.
He could be very lazy one day in training just to be jumping around the next day on the jogging trail.
"That's why it's so hard to decide something beforehand with him. I never decide how to train him before I'm done with the warm up".

Pushed him for the first time this year
The big goal of the year was in his last start when he finished second in Jubileumspokalen.
Milliondollarrhyme got the not so flattering task to tow Who's Who and Örjan Kihlström three wide the last 700 meters and lost to the favorite in a close photo finish.
"I realized it would be hard to beat him once he got to follow us. My thought was to go easy around the last turn and try to push him coming into the stretch to get some separation. But it wasn't enough".
Nothing to say about that defeat..
"No he fought well and I have nothing else to say about that. I've raced him in the big races this year but at he same time I've been careful with him and haven't had any high expectations. In his last start at Solvalla was the first time this year that I really pushed him".
What are your thoughts on Sundsvall Open Trot?
"I don't expect him to win. On the other hand he's grown into the elite now. He can go with the best ones and he can follow them regardless of the tempo".
What did you think when you saw that he got post nine?
"Then he'll get a nice trip, I though. We'll continue racing with shoes. It's important that he gets a nice trip and gets to finish well. Ringostarr Treb got a good post and will probably be hard to beat. Nadal Broline is good. There are many good horses and my horse is one of them".
After the final of the silver division in the end of August, this could be it for the year for Milliondollarrhyme. Fredrik B Larsson hasn't decided yet where to go after that.
"I want to get going with the preparations for next year where Elitloppet will be a big goal".