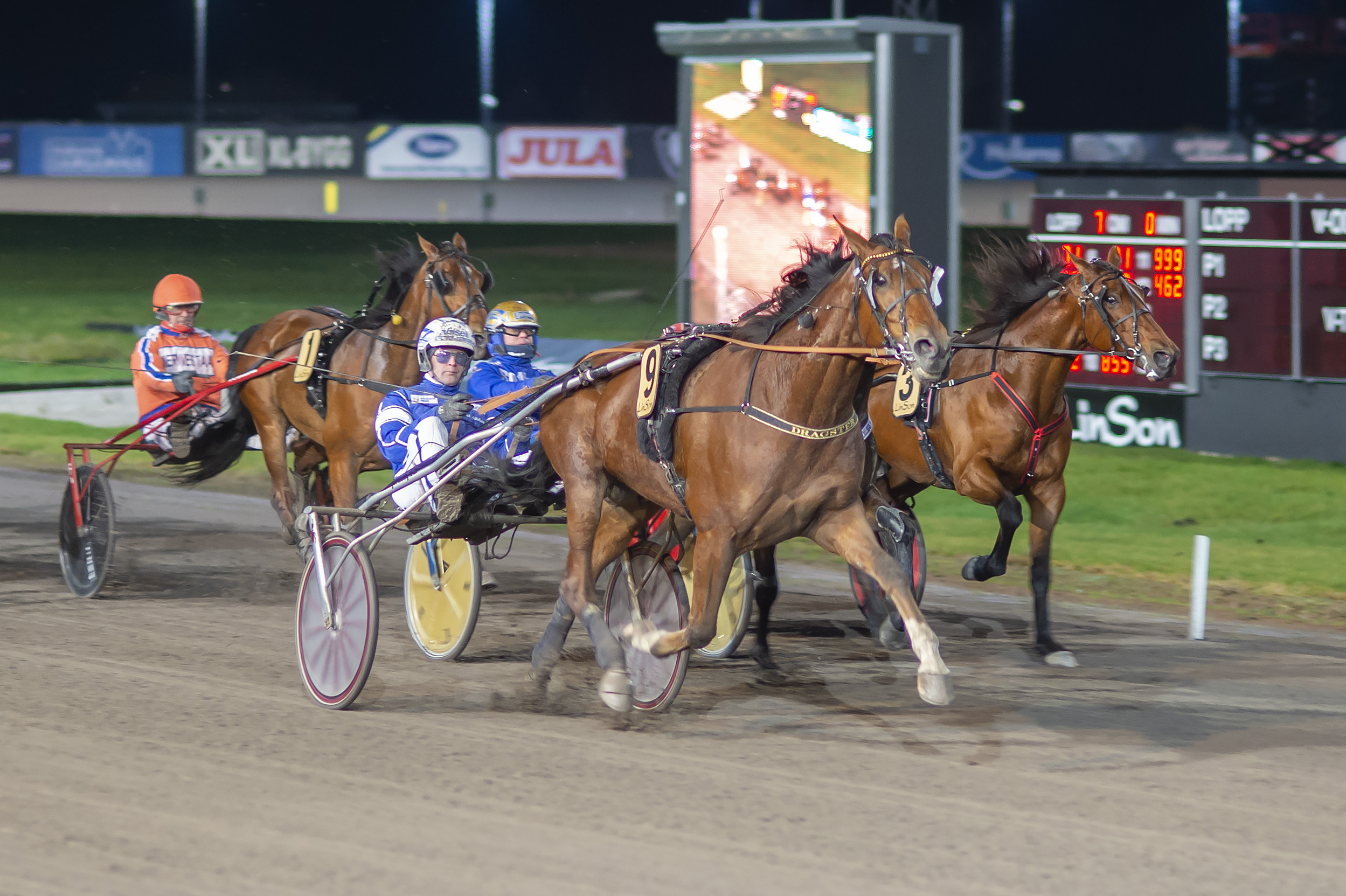 V75®: Continued good form for Dragster - gets a five out of five

His name is Dragster - and lately he has looked like one too.
Roger Malmqvist’s nine year old has three wins and two second places in the premier league of trotting since last fall and the form is still good going into Saturday’s finals at Solvalla
“He gets a five out of five rating for his last heats at Jägersro”.

On Saturday it’s time for the first finals of the year in the Swedish Trotting League and V75®. Solvalla is where the battles will take place and Jägersro licensed trainer Roger Malmqvist makes the trip with one horse.
A horse in very good form.
Back in October the then eight year old gelding Dragster won both a leg and the final of the silver division on V75 and followed that up by winning the gold division in Halmstad on December 19.
After having finished second in the gold division in the beginning of the year in Kalmar, the dragster is ready for another STL final.
V75-6 on Saturday is Bulwark’s race - the final of the gold division - over 2,140 meters. Erik Adielsson drives for the seventh consecutive time.
“Erik is part of the reason why the horse has improved lately, he has given him great trips so that he has been able to develop further. I’m so very pleased with both my horse and driver and I definitely think that Dragster is one of the horses who can win on Saturday”.
Roger Malmqvist and his girlfriend Erika Karlsson changed up the training routines for Dragster a while back and it has certainly paid off. Erika had always ridden the horse but lately he gets more dressage training and less of the heavy training pulling a cart. Malmqvist trained his nine year old on Monday to get him ready for the Saturday final.
“When he hasn’t raced for a month I like to train him some quicker intervals a week before he races. Nothing fast, just enough to open up his lungs a bit for this start. After that he will train nice and easy on Wednesday and get some dressage training on Thursday. He will have Friday off and then we will make the trip up to Solvalla on Saturday morning” says Malmqvist.
How does trainer Malmqvist rate the training session done on Monday?
“He gets a five out of five, since he felt the way he should and usually does, which means good”.

“Stronger thanks to dressage”
Dragster has been with Roger and Erika since he was a yearling. He has always been a good horse but he has taken several steps up just since last summer.
Easier training in the cart and more dressage training has made him stronger.
“The horses use completely different muscles when you train dressage with them, compared to when you train them to the cart. It has simply made his stronger. We have also let up a bit on the heavier training and make time to go to Jägersro to train on the sand track there which isn’t as deep and heavy as ours” says Malmqvist.

Adielsson calls the shots...
One of the horses in best form in the country seems to remain just as good, judging by the last training session.
In his last start Dragster got a bit too anxious in the lead and got beat by Joakim Lövgren’s Sevilla who came charging hard deep in the stretch.
Dragster is quick out of the gate and could get by Gareth Boko who starts from post position one in V75-6.
“Erik calls the shots when it comes to tactics. Dragster is not a horse who pulls and you can rate him the way you want. If Erik doesn’t want to leave it’s no problem to grab up and take a seat somewhere. He’s not a sharp horse like that”.
But in his last start in the gold division at Kalmar he started pulling in the lead?
“He was fine after he got to the lead but when Adrian (Kolgjini) came up on the outside he started racing against that horse despite being in the middle of the race. He has done so before but that’s a long time ago and it actually surprised me, that he did it now again. He raced well though and we were very happy with him”.
So you think that Dragster who not long ago won the silver division final will go and win also the gold division final?
“Yes I think he measures up well against these horses. If Erik can work out a good trip with him and has some racing luck, he is definitely one of the horses who can win”.
“Equipment-wise he will race the way he usually does. Maybe we’ll race him with a pull off earhood. We have raced him with hat a few times but I have never seen it do much for him. We’re coming with a good horse”.