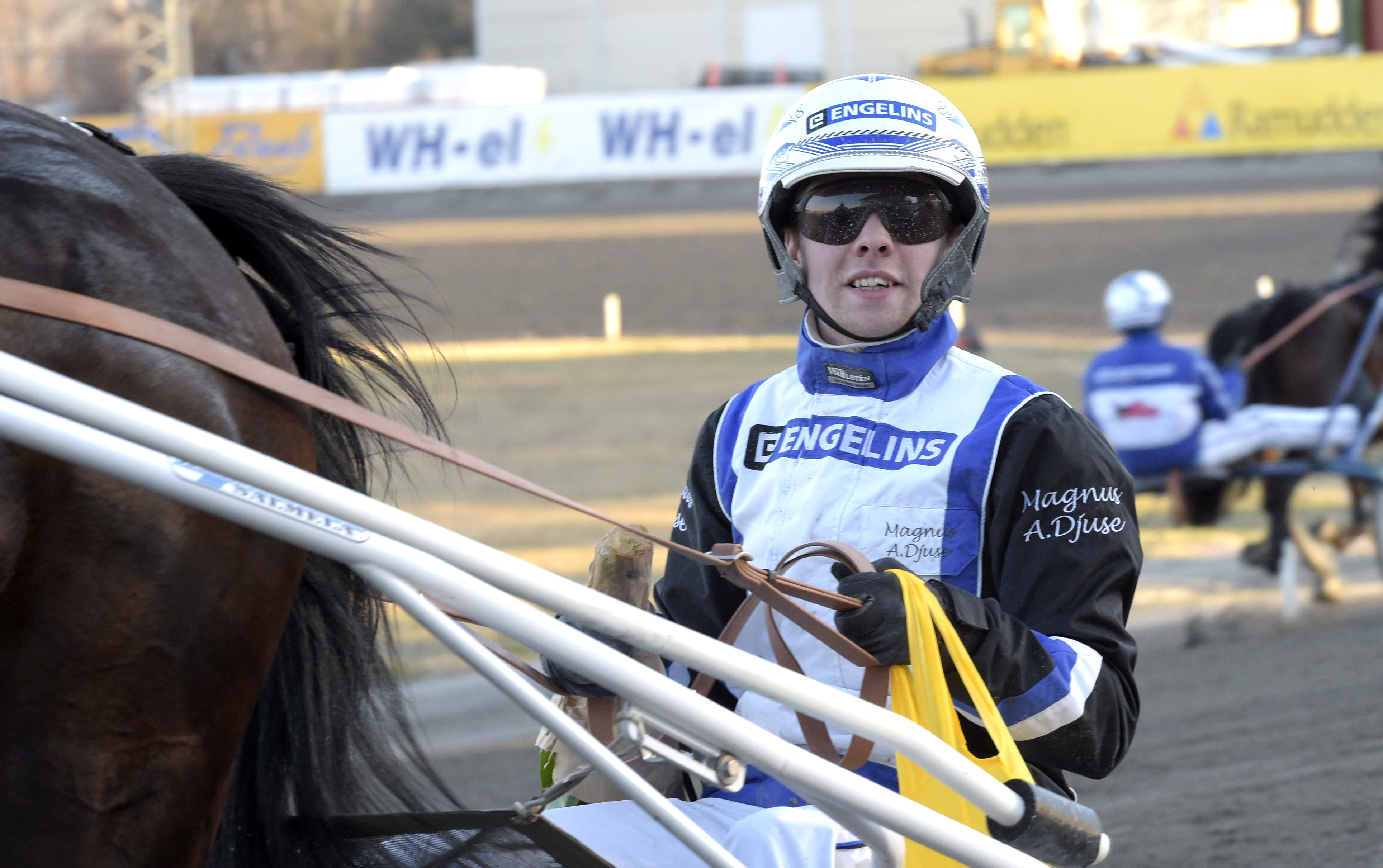 V75®: Djuse thinks he has a great chance

19 years old and one of the biggest talents in Sweden.
Magnus A Djuse really likes his chances with Lukas Rauen when V75® is coming to Hagmyren.
"Had someone else driven him and I was just a bettor I would have left him singled out on my ticket without a doubt. That's how good I think he is" says Djuse.

Magnus A Djuse has earnings of SEK 3.6 million so far this year as a driver. Very strong numbers for a apprentice licensed driver at Östersund.
Magnus is the youngest of the four Djuse brothers who all have chosen a career in harness racing.
Mattias is a professional trainer at Solvalla, Martin is a professional trainer at Bergsåker, but moving to France, and Mats is just like Magnus an apprentice driver at Östersund.
"It's always been horses and racing for me since I was little. I think I was eight when I got my pony drivers license and by then I had already sat behind the horses at home a lot. So it's pretty much been horses all my life" says the 19 year old.
Have you done any other sports?
"I played football and floorball but I quit that when I was 14-15. I guess I didn't have enough interest and after that it's been all horses" says Magnus who still lives at home in Brunflo, a fifteen minute drive south of Östersund.

Solid win percentage
Magnus A Djuse drove his first race in March 2016. He won seven out of 60 starts that year and the following year the numbers were 20 wins in 150 starts.
Last year he drove 400 races and won 53 and with a solid win percentage of 12-13 every year his earnings in 2018 reached almost SEK 2.5 million.
"It's gone better than I ever expected. When I started out I had no clients but now I get to drive more and more and I get better and better horses".
The success has continued at the same pace this year and three weeks into July Magnus has just surpassed SEK 3.6 million in earnings and won 52 races in 440 starts.
"I think racing horses is awesome. It's a fun and different job where one day is not the same as the next. It's fun to drive. I like the competitive side of it, it's fun when you've done your job, when you've had a good drive".
Any dreams for the future?
"I have no plans of becoming a trainer, I'd rather be a catch driver" says Magnus.

Won V75® in April
Magnus has two drives on V75 this Saturday at Hagmyren racetrack in Hudiksvall.
The first drive is Mr Golden Quick (V75-1) - a horse Magnus won with on V75 at Umåker back in April.
"He's much better than what the program tells you. He's in good form but has started from bad post positions lately and has gotten away last. If I can find a good spot for him, he's got a very strong finish. If you use a few horses in this race I think he should be on your ticket. I think this race looks a little bit easier compared to the ones he's been in lately".
Magnus A Djuse has higher hopes for Lukas Rauen (V75-4). He even left himself singled out in the weekly 'V75 expert picks'.
"He's a fantastic horse who is very good for this class, he has a lot of ability compared to the money he's made so far. Had someone else driven him and I was just a bettor I would have left him singled out on my ticket without a doubt. That's how good I think he is" says Magnus A Djuse.
How would you describe Lukas Rauen?
"He's very versatile, he's both strong and quick. His gait wasn't perfect in his last start so we'll correct that for this start. He was interfering in his last start so he will race without shoes upfront this time".
Tactics?
"We are where we are but I will try to get out as soon as I can, then we'll see what Örjan Kihlström does with U.R.Faxe who I think will be the favorite. He showed good speed in his last start and I don't want him on my back during the last kilometer so I'm leaning towards an early move instead. No horse in this field scares me".