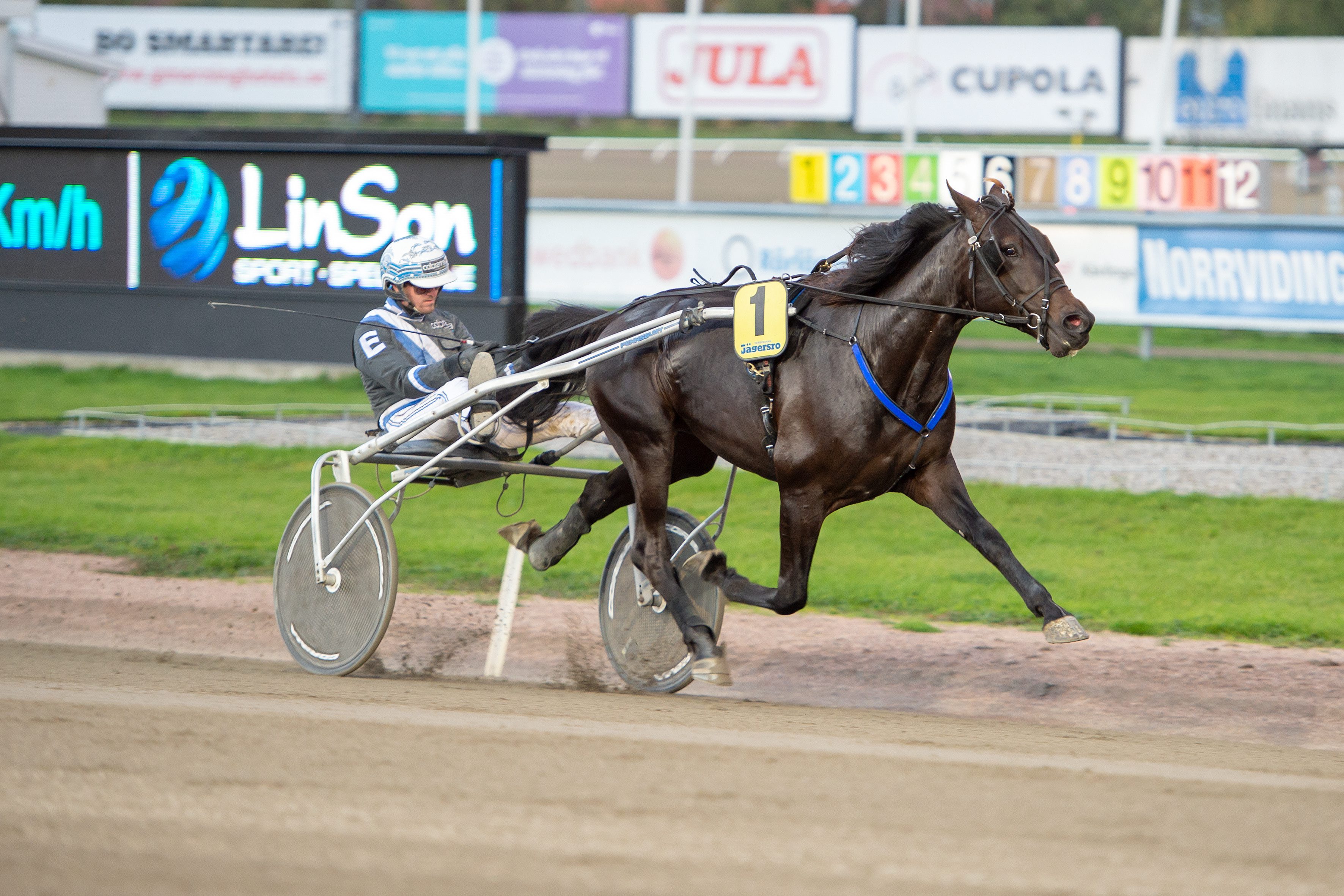 V75® (double jackpot): Can do like his mother - win Svensk Uppfödningslöpning

Seven years ago Fascination won Svensk Uppfödningslöpning.
Now her undefeated son Trix On Line will try to achieve the same accomplishment in the biggest race for two year olds in Sweden.
"He is a copy of his mother and a lot like her the way he goes about things. He's a big talent and he's one of the horses who can win it" says trainer and breeder Sören Norberg.

On Saturday Jägersro is hosting V75® which comes with a double jackpot where a sole winning ticket is guaranteed SEK 32 million. In focus on the sport's side of it is the biggest race for two year olds in Sweden - Svensk Uppfödningslöpning. Someone who has won it before is Sören Norberg. He did it already in 1984 with Brooklet Valley as both trainer and driver. He also played a big part in Fascination's win in 2011, with Johnny Takter driving. Sören Norberg bred, owned and trained Fascination but sold her after she won her first start. Fascination swept the stake races she was in and besides Svensk Uppfödningslöpning, she also won the Oaks, the Breeders Crown and Derbystoet for her trainer Lars I Nilsson.
Fascination won half of her 38 starts and made SEK 5.8 million.
"Viktoria Eriksson and I co-bred Fascination and we trained her before selling her to Fred Persson after her first start. After that she won everything there is to win as a two, three and four year old. In Svensk Uppfödningslöpning she beat the boys, then she went on to win the Oaks, the Breeders Crown and Derbystoet which nobody had done since 1936" says Sören Norberg who also owned the dam of Fascination, Elissa F.Z. - whom he had bought in Italy.

"He has 'it' "
After her racing career was over, Fascination was bred to Hambletonian champion Trixton from USA. She returned to Sören Norberg's farm and two years ago she gave birth to a colt named Trix On Line. He is trained by Sören Norberg and is keeping up the family name. After three starts he's still undefeated and he's been impressive.
"He's a really nice colt and he has 'it'. He's a big talent and a copy of his mother. He's a lot like her the way he goes about things and he's been very smart from day one. Just like Fascination he's a clean gaited horse with a lot of speed and he's very calm and collected. His dam was a real trotting machine and he's the same".
"It's unusual but a lot of fun to have been there and pulled out both Trix On Line and Fascination as foals and to have trained both of them from the beginning. We've been there from day one and it's been very exciting to have seen them being born and be there all the way until they start racing and see them become such good horses" says Norberg.

"Haven't pushed him in training - pure talent so far"
Trix On Line started his racing career by winning his first start very easily and has won two more starts after that. His last start was the elimination to Svensk Uppfödningslöpning where he was very impressive. After a very quick beginning of the race and a long battle for the front, Christoffer Eriksson gave up the lead and they reached the first 500 meters in a kilometer rate of 1:09.2. The first kilometer was 1:12 and after sitting behind the leader until the top of the stretch, Trix On Line trotted by to win in 1:13.9 over the short distance.
"That was very strong of him after that tough beginning to be able to finish like that. But already with 300 meters to go I could see how he grabbed on to the bit and just wanted to go on by. He didn't feel empty at the finish line according to Christoffer and he wasn't tried when he came back to the stable. He's pretty laid back in a race and you have to urge him along a bit, then he'll go".
"I haven't pushed him at all in training, he's racing on pure talent so far. He keeps developing and he gets better with every start. The way he has won these races is what impresses me. He'll be even better on Saturday" says Sören Norberg.
How good can he get?
"I'll say this; he's a big talent with a good attitude but it's a long way to go to his mother's records and the money she made. But if he stays sound and healthy he has an exciting future ahead of him, that much I'm sure of".

"He's stable and quick out of the gate - perfect post"
The first prize on Saturday is SEK 1.4 million (since every horse remains in Premiechansen) in what is the oldest of Sweden's classic races. Trix On Line will start from post one behind the gate and he was Christoffer Eriksson's pick (he also got the other elimination winner Aetos Kronos in to the final).
"We had the choice between post one and four and picked the inside post since he is quick out of the gate. He was a bit sharp last time since I had tested him behind the gate before the races. But he's a very smart horse so that's not a problem. Christoffer gave up the lead when they were going too fast. It's better to come home in 1:09 speed than to start fast".
How you feel about your chances of getting another win in Svensk Uppfödningslöpning?
"He's shown he has enough speed to be able to battle for the win. The post position is perfect and he's stable and quick out of the gate. Wether he'll race on the front or not is up to the driver".
"It's always difficult to predict these types of races, I've only seen the opponents on TV. When he trotted 1:13.9 at Jägersro it was wet and sticky and at Solvalla the next day it was a nice dry track for those eliminations. So it remains to see if the others are better. My horse is only making his fourth lifetime start. It will come down to who gets the best trip. I have a lot of faith in my horse, he will fight and do his best" says Sören Norberg.
The Jägersro trainer has turned 70 and has been the business for a long time. In the 80s he trained Junior Lobell who was a winning machine with 41 lifetime victories and SEK 2 million in earnings. Sören was also trainer in Italy for three years and has now been Jägersro trainer for five years with 13 horses in training currently at the farm in Blentarp.