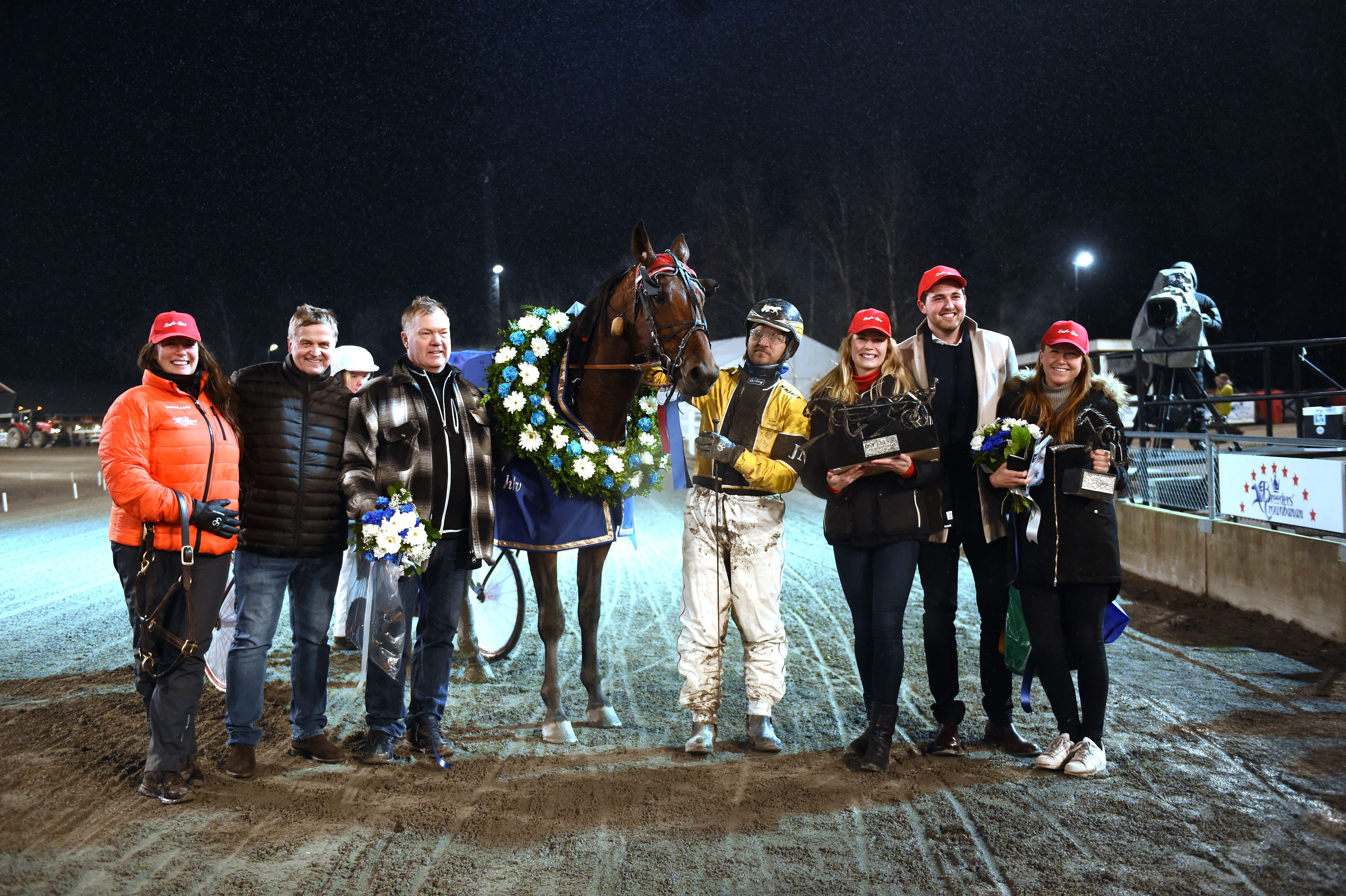 V75®: Family horse going for six in a row in the King's Trophy

Family horse and the public's favorite.
Lucifer Lane is sporting five in a row and is undefeated this year.
On Saturday the four year old is chasing his next victory when he's racing against the cream of the crop in the final of the King's Trophy at Åbytravet.

Christine Larsson is the breeder, owner and caretaker of Lucifer Lane (V75®-7). Her boyfriend, Örebro licensed trainer Thomas L Nilsson trains the horse and his son Johan A Nilsson is the driver.
Last year they won ten races together Lucifer Lane topped off his three year old season by winning the Breeders Crown final and his biggest check so far, SEK 800,000.
This year he has two starts and two wins.
"He's been very good in both starts and you can tell he had a good winter. In his first start he was in the lead and sprinted away easily, there really wasn't much speed until the last 600 meters" says  Johan A Nilsson who after that start guided the family horse to victory in his King's Trophy elimination.
"I was worried the 1:13 the first kilometer would catch up to him in the end but he just sprinted off pretty easily and showed that he took a big leap forward after that first start".
That victory meant, besides a spot in the final, that Lucifer Lane surpassed SEK 2 millions in earnings.

"Dream scenario"
The final of the Kings Trophy is scheduled as a part of V75 at Åbytravet this Saturday and the winner receives SEK 1 million.
It's a race Johan A Nilsson really is looking forward too.
"It will be a lot of fun! Considering how he felt in the elimination, it will be very exciting. It's been exciting in all these finals he's been in, but it really feels like he gotten better this" says Åby licensed driver Johan A Nilsson.
Lucifer Lane is chasing his sixth straight win on Saturday. But he's got some tough opponents, such as last year's Hambletonian champion Perfect Spirit who paired with Örjan Kihlström also won his elimination.
"They got to pick their post first with Perfect Spirit and I assume they hope to hold up the lead. I know Calle Crown can leave very fast, but since they got to pick first and picked post one with Perfect Spirit they must count on him holding up the lead" says Johan A Nilsson and continues:
"My dream scenario would be finding the back of Örjan Kihlström and Perfect Spirit and wait for the passing lane to open up"
Hoping for a win is also Lucifer Lane's fan club - a full buss - coming from Örebro to cheer on their favorite horse in Gothenburg.