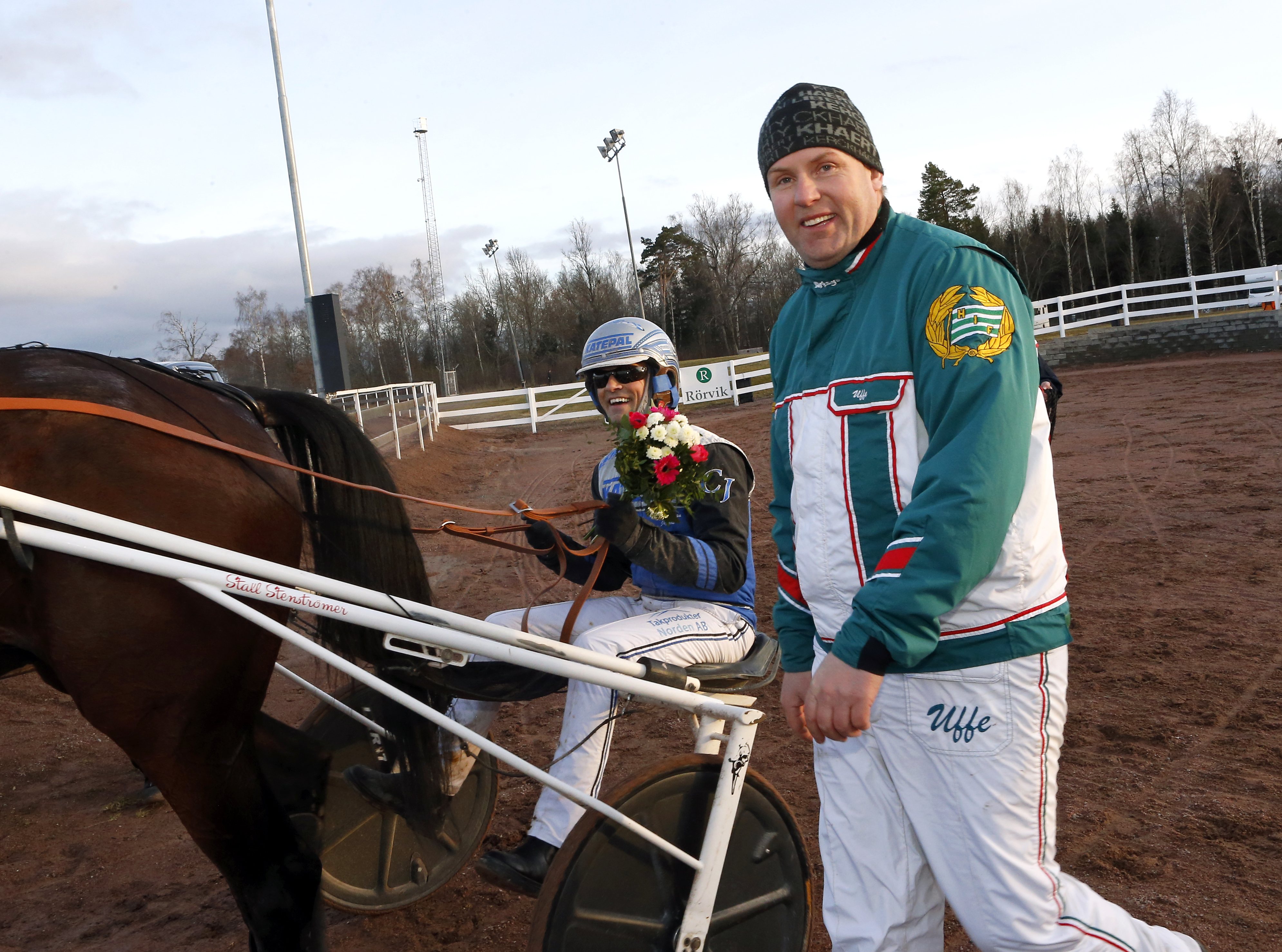 Handsome Brad is on his way to blossom into a true elite horse.
Ulf Stenströmer trains and therefor many wants to compare him to Noras Bean who made SEK 12 million on the tracks.
"He has a couple of notches left up to his level...but Handsome Brad is closing in" says the Axevalla trainer before this Satuday's start in the gold division final at Solvalla, which is also the first elimination for the Olympic Trot.

This Saturday will be the best race day so far this year in Sweden with V75® finals at Solvalla and several legs of Margaretas Tidiga Unghästserie for three and four year olds.
The feature is schedule as V76-6. It's time for the Olympic Trot once again and this year's first elimination is Saturday's gold division final.
It's an even field on paper as they say. The three favorites seem to be Handsome Brad, Milligan's School and On Track Piraten, where the latter one will have to start from post 11 in the second tier.
Ulf Stenströmer's challenger Handsome Brad made his first start of the year two weeks ago and he made it a winning one in his gold division debut.
The six year old drew post position one and he could go wire to wire again.
"I have a hard time saying who could challenge him for the lead. Elina Web is quick and so is Västerboonthenews. But we have a very quick horse and we hope he can hold up the lead" says the Axevalla trainer.
Carl Johan Jepson sent Handsome Brad to the front last time and had to be very decisive to keep Joakim Lövgren and Racing Mange on the outside. After 500 meters there was another burst of speed when Ulf Eriksson tested the leader with Milligan's School.
"According to the official timer they trotted 1:04 speed the first 250 meters and according to a journalist who called me they also trotted in 1:06 speed for 300 meters down the backside. So had he been a little tired down the stretch and finished second or third, I would have understood that. But he won in a way that makes me have high hopes for him this year" says Ulf Stenströmer.

"Grow into the gold division"
The final of the Olympic Trot will go off at Åby on April 27 and Stenströmer would of course like to be there. Other than that there is no specific goal for Handsome Brad this year, just the hope that he will grow into the Swedish elite.
"That will be the goal, that he can grow into the gold division, in the summer when it's at it's toughest. But that's a step for him to take and decide for himself in that case. He took a couple of steps last year but he has to take a couple more this year to be as good as the best gold division horses" says Ulf Stenströmer.
The winter weather messed up the stable. The sand track where the winter training is done was impossible to maintain.
"It shows that my horses have missed out on a lot when my sand track hasn't been good the past eight weeks. They're all behind, except for Handsome Brad. He finished last year in the best way and he was put away healthy and sound and even if I couldn't train him the way I wanted this past winter it seems like it fit him somehow. He showed that in his 2019 debut too".
"I think Calle (Jepson, the driver) was as pleased with his return as I was. He never pulled the earhood or the pull down bridle. Västerboonthenews got closer but when he got to within half a length it looked like my horse made sure he didn't get any closer".

Giggling with joy
Monday morning Stenströmer trained Handsome Brad in the sand which made him giggling of joy - as we can hear when we're making this interview.
"The sand track was fantastic now. So was the horse. I trained him eight intervals with two of them a little faster and when he came back to the barn his heart rate was very low! Haha, the form is there for sure".
Handsome Brad was good in first start of the year and should be even better this week then?
"Normally he would be better now when he's made a start. But on the other hand he doesn't have to be much better than what he was. But he's racing against horses who are talked about for Elitloppet on Saturday so he has to be good".
Any changes planned to make him leave better from the inside?
"We'll see after the warm up what we'll do. But he'll probably race with the same pull down bridle again. If he's very calm and relaxed we might put a blind bridle on him. But I hope he can keep up the lead regardless of which bridle he wears. He has raced well in the lead many times before. Other than that he'll go barefoot and in the same bike as last time".
What about all the comparisons to your old horse Noras Bean? He's your own product, he's Swedish born and he has taken a step forward after his four year old season where he finished second in the King's Trophy?
"He still has a couple notches up to Noras Bean who raced in the gold division already as a four year old. He was in the elite for five, six years and I hope we get to experience the same thing with Handsome Brad. I have to say he's getting closer".