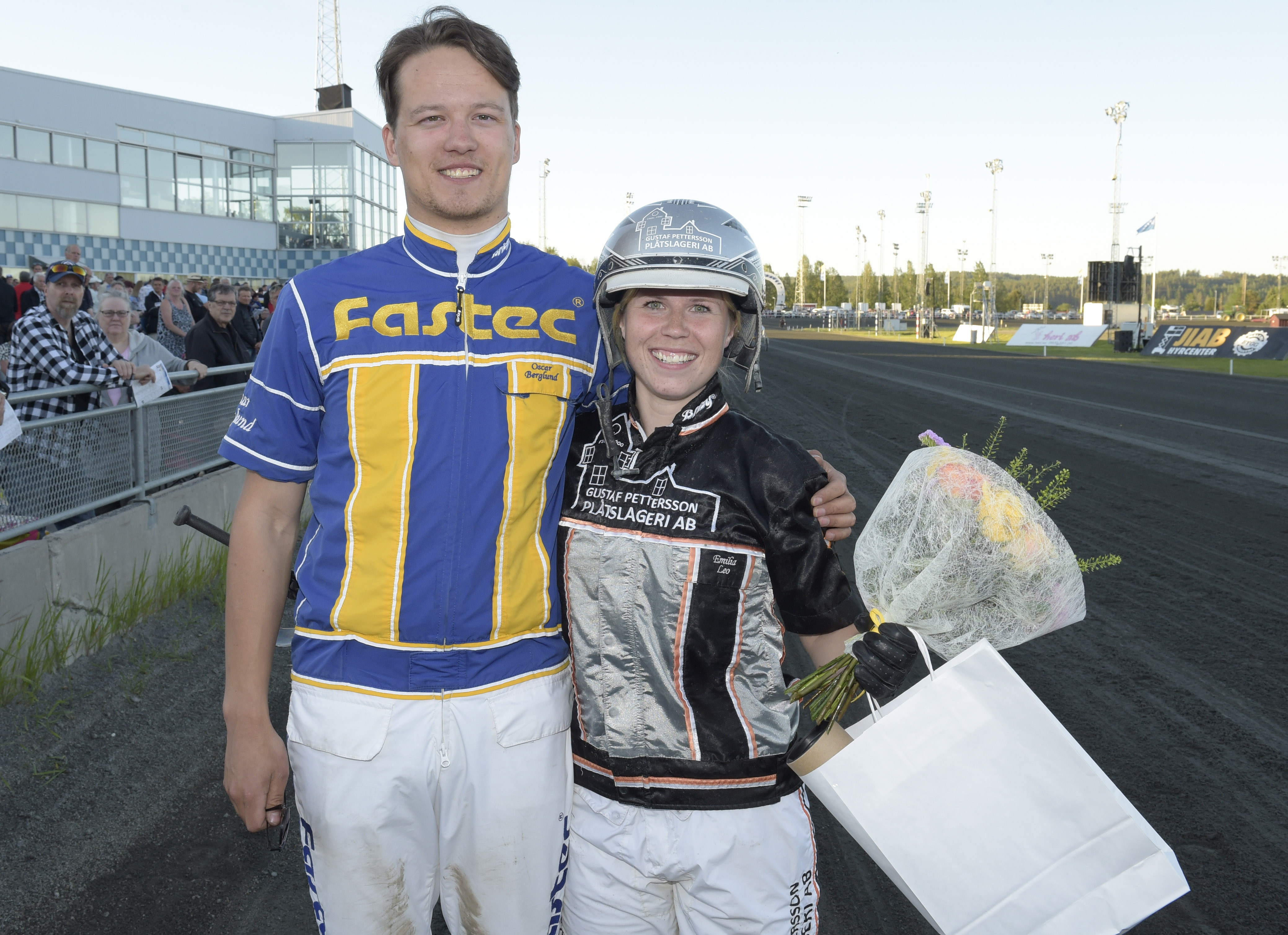 He's the super amateur trainer who wins more than every fourth start.
She's the most winning apprentice driver and was the 'Rising star' award winner in Sweden last year.
This duo really wants a V75® win this weekend.
"Cobourg Hanover has a perfect task and I've sharpened Shocking Superman a bit extra in training. Plus I have the best driver" says Oscar Berglund who has Emilia Leo driving for him at V75 at Solänget.

All six of the stable's racehorses have enough points to get in on V75®.
That's a proof that the results lately have been very strong.
But they've pretty much always been for Oscar Berglund.
As an amateur trainer he's made a name for himself with his high win percent and over the last four years his horses have won more than every fourth start they've made.
It's not strange that owners are starting to take interest in him.
"I've gotten a lot of inquiries. It's not so nice to have to say no, just because I'm an amateur. Especially when it's a nice horse. But we're building a new barn now. When it's finished I'll have 22 stalls. I'll start school in a few weeks to get my professional trainers license and as soon as I have it I'll be a professional trainer" says Oscar Berglund who lets future classmate Emilia Leo take the reins on both his V75 starters this week.
"We're not a couple as many people seem to think, but we've been very good friends for a long time. As a matter of fact I call Emilia when I have a problem with a horse and she often has the answer. She used to live far away and was racing at different tracks than I do, but now that she can go north it works out perfectly so that she can drive my horses".
So she can be called your regular driver?
"Yes, absolutely. As long as she wants to drive my horses. Honestly, I'm surprised she doesn't get more chances and drives on V75 every Saturday. I think she's one of the best drivers in the country, she gets more out of the horses".
More out of the horses, how?
"She has something in her hands that many drivers don't. It could be a horse that always pulls, but when she drives it looks like a Sunday stroll. And she gets an extra percent out of every horse, they try harder when she drives. That's how I see it. She also gives me very good feedback after a race, it could be something she feels in a race that I can't feel training them at home on the straight track".

"Just the answer I wanted"
The 1200 meter long uphill straight track is the heart of the Berglund training stable, but for this start he's tried another trick to sharpen the form on his Gold division starter Shocking Superman (V75-6).
"Last Sunday I took him to Östersund and trained him a fast heat there. I've never tried that six days before a race and my thought is to sharpen his form a little bit extra that way. He finished the heat in 1:10 speed and felt very good and it was just the answer I wanted. He's a very good horses who's had soundness issues and been very hard to keep sound. After his start at Bergsåker in June, the vet found a couple of things that we treated. He's been good since and when he won he was very good".
Why did he make a break in his last start?
"He interfered when he was about to attack. I raced him with a little bit longer overcheck than usual but I don't think that was the reason. I see it as an accidental break. This time he'll race barefoot all around which is his optimal balance and that also eliminates the risk of him interfering. He will race with blinkers and in an American sulky again".
What are your thoughts on his race this Saturday?
"He can leave better than what he's shown, at least according to the drivers who's driven him. With that being said, I doubt that Emilia wants to get into a battle for the lead. When he's on his game he has all the weapons in his arsenal and not too many are better than him then. When he won he trotted 1:05 speed for a long but and I think he would have been able to near the world record, had someone been able to challenge him. I hope for a similar effort here and he should have a chance to win".

"Down in the basement"
Winning machine and catapult starter Cobourg Hanover (V75-5) got beat from the lead in his last start as the heavy favorite.
"Nothing wrong with his performance. Malkin is a very good horse who was simply better that day. My horse was struggling a bit with the deep track, he likes a firm track better, which I hope we'll get this time" says Oscar Berglund about the seven year old who one year ago has seven straight wins.
"Then it felt like he would go to the Gold division, but after being sick last fall I doubt he'll get there, I'm so happy to just have him back racing again. He had to go completely empty three times in a row before we even found what was wrong with him, a virus in his airways. He was down in the basement last winter, he lost all his muscles and didn't look good at all. Therefor I'm very humble when it comes to this horse and I view everything he does now as a bonus".
Will you sharpen his form a little bit extra too for V75?
"Yes, we try to at least".
How?
"By going a shorter and faster last interval. Hopefully that will get him a bit sharper and quicker".
Have you tried that with him before?
"Yes, last time I did was before a start at Åby but then he was sick and stopped so I cant say wether it helped or not. It's mostly for myself, so that I can say I've tried my best when he's racing for some more money. Same equipment as usual, American sulky, blinkers and barefoot".
Your thoughts on his race?
"He will take the lead, I can't imagine he wouldn't . Then it's up to Emilia and how the horse feels. This race actually has the perfect conditions for him so if he would race as good as I know he can, he could lead the race from start to finish. But I have no demands like that on him anymore and I wouldn't be disappointed if he wouldn't try the in the end".