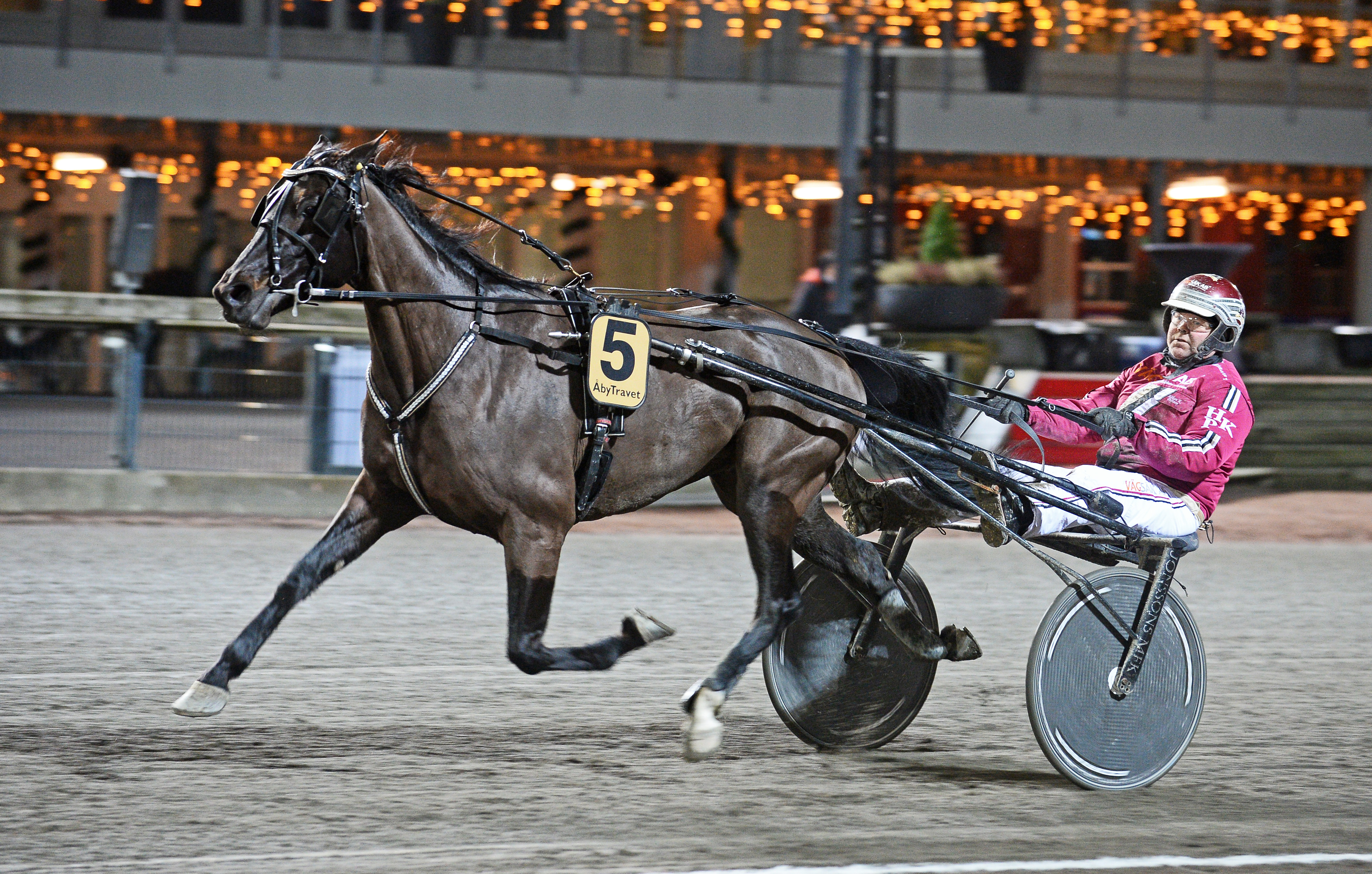 Two years ago accident struck when Håkan K Persson got Four Guys Dream on top of himself out in the paddock.
It resulted in three fractures, surgery and a long absence from work for the trainer.
The horse is now paying him back with his success on the racetracks - and on Saturday he is a hot contender on V75®.
"I have to believe my horse will have a good chance to win" says Håkan and leaves him singled out in V75 Expert Picks.

The Halmstad licensed trainer got injured when the accident struck at his farm in Falkenberg. He was bringing a horse in from the paddock when he ended up with the horse on top of himself and twisted his leg so badly that it fractured in three different places. He had surgery and had to wear a cast for eight weeks.
"It had rained a lot and we were walking by a water puddle so I walked around the horse. He then jumped up with his legs on my shoulders and pushed me down so that I landed with my leg underneath myself, twisted at a 90 degree angle and I screamed as loud as I could. It was an excruciating pain and it took a long time before someone heard me and until the ambulance came" says Håkan K Persson.
"I had to have surgery and they also re-did my cast a couple of times. It could have been much worse, the horse could have hit me in the head".
How are you feeling today, are you fully recovered?
"No, not completely. I have lost some mobility in the leg and it hurts if I sit still for too long. When I'm travelling by car and when I shoe a horse it also bothers me. It's not bad to a point where I can't live with it but it's bothersome".
"Impressed by the horse"
The horse who caused the injury is Four Guys Dream who now is very successful on the racetracks.
He started off this year magnificently with three wins and a third place in four starts. He won convincingly on V86® in January and the two last starts have been even more impressive. Especially his most recent start when he attacked the leader in a speed duel down the back side and took his second consecutive win. That was with Håkan's brother Stefan Persson in the sulky, as he has been in the horse's last starts.
"I stood at the fence on the backside and though that this will never work out with the speed they were going. They told me they were trotting in 1:05-1:06 speed down the backside. Stefan told me when I met up with him after that race that today I was impressed by the horse. So was I" Håkan says.
"The horse has improved a lot this year and after I won with him on V86 in January when he trotted the first kilometer in 1:12.5 he has improved further.  Even that tough race at Jägersro seems to have done him good and he's gotten more alert".
"He's tough out in the paddock and what happened two years ago was not because he was mean, he just wanted to play. Just like he did with the other colts he was turned out together with then. But you can say that he's paying me back now and it's nice that it turned out this way".
Could be the next star of the stable
If you would describe the horse, what are his best features?
"He's good at most things. He can leave well, he's strong, he's got speed, he can race from any position and over all distances. I don't think he has any weaknesses and those horse are far and few between".
Could he be your new poster boy and your next star?
"He could. I've trained a few horses who ended up millionaires and he could be one of them. You never know, but he's got potential to go far. He trained today (Monday) and everything seemed fine. But he's not a horse who shines in training, he really grows on the racetrack".
"Today he's the best horse in my stable, but I also think that the quality of my stable has improved. I had 23 horses early December and now I have 32. Some interesting ones have come in to my stable lately" says Persson.
"Has to have a good chance"
On Saturday Four Guys Dream will start in the fourth leg of V75® in Halmstad. He will start from post position five behind the gate and will be driven by Stefan Persson. Håkan is optimistic and leaves his horses singled on the V75 Expert Tips.
"As good as my horse has been, there is no reason to not believe in him. The post position is good, the form is good and he has to have a good chance to win. He can leave well even if he doesn't follow the car. But on the other hand we've never asked him to go full speed out of the gate yet. Shoeing and equipment will be the same as in his last start" says Håkan K Persson.
You have two more starters on V75. What about their chances?
"Skogbys Gallardo (V75-2) is a decent horse who was coming along fine in the end of last year but then he hit himself on a splint and we had to freeze-fire it. He raced well in his first start back but V75 might come a little bit too soon for him. But it's here at our home track and he could make some good money. He might race barefoot this time. I will think about it during the week. I raced him barefoot once last year but that didn't work out at all".
"Wingait Erik (V75-4) is a horse that I like. He's an honest racehorse and he always does his best. He finished well in his last start and this is a form of handicapped race and I knew would get a bad post position when I entered him. If he just has some racing luck along the way he could make some good money".