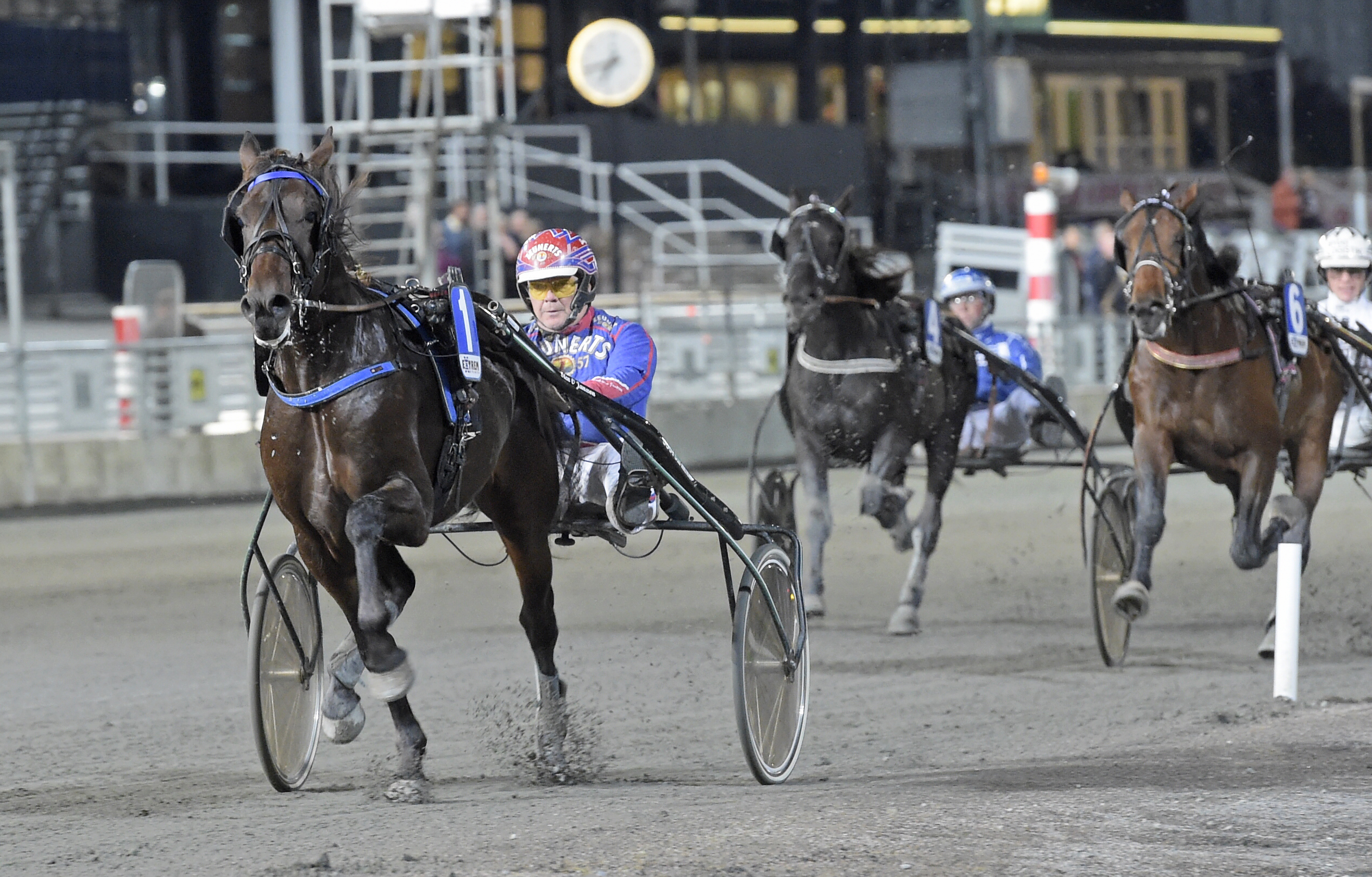 He has trained and developed several millionaires and stakes winners in the past.
Now Sten O Jansson has a new promising colt, the two year old Belker - who's chasing SEK 500,000 on V75® this Saturday.
"He won easily in his last start and should have a very good chance" says Sten O who owns and has bred the horse together with his wife Ingela.

Örebro is this week's V75® host. V75 this week comes with a jackpot where a possible sole winning ticket will pay SEK 42 million. On the sporting side of it, the two year old race Svampen with SEK 515,000 to the winner is one race that sticks out. There are many talented horses in the field and the one that everyone talks about is Belker. This two year old colt has two wins, one second and one third after four starts. He's trained by Sten O Jansson on Gotland, who has developed many good young horses before.
"Belker is a very nice colt with a great attitude who hasn't been close to tired yet in his career, even if he has lost two races. But the one time he was locked in and at Bergsåker he was interfered with at the start and again while on the move forward. Even if he trotted 1:13 with 1:10 speed last 500 meters he just kept going faster and faster. But the finish line came up 100 meters too soon" says Sten O Jansson.
"It's always difficult to gauge a two year old this early, anything can happen and one day they hit the ceiling. But it feels like there's a lot more to come and he's a better horse than Super Nice and Zahara Goj that I have trained and they've both made SEK 2 million.

"He's like his mother - same great attitude"
Sten O Jansson runs together with his wife Ingela a small stable at Hejde Hajdgårde in Klintehamn, on Sweden's biggest island Gotland. They've bred Belker and they had the dam - Ok I Can - who made over SEK 500,000. The sire of Belker is Scarlet Night.
"The dam was very talented as a two year old but was afraid of the stone dust hitting her in her face and she trotted with the hand brake on. As a three year old she won a Breeders Crown leg and set the track record at Hagmyren. She was parked outside a filly that had made a million already. She set a track record under saddle and one at home at Visby over the long distance, she was strong".
"Belker is a lot like his mother when it comes to attitude. You can stop him after a race and get off the bike to check him off without a problem, he won't move. Even though he's just two years old. But that also has to do with how you train and teach them and how much they are handled. I want my horses that way and at home we take them right out in the woods with no lead or no help. If something happens you should be able to stop and get off the cart to take care of it".

Torbjörn Jansson: "He's the real deal"
In his last start, Belker won a Breeders Crown leg at Solvalla. Despite sitting on the outside, he took over on the backside and totally crushed his opponents. Torbjörn Jansson who drove had many compliments to give the horse after the race and said that he's the real deal and a very good horse.
"He wasn't even tired, wasn't blowing at all as he came off the track. In the test barn his heart rate was low and he seems to have good heart and lungs. He doesn't need a trip and he's all trot. I haven't seen him gallop since he was three days old" says Sten O.
"It was good that he got an easy race since there wasn't much time in between starts. I like to race every four weeks. I didn't have that many races to choose from since he had already made over SEK 100,000. Had he not raced at Solvalla it would have been five, six weeks in between starts".
"For us from Gotland it's the travelling that wears the horses out more than anything. Not so much the time on the road, but the actual ferry ride. But this is a tough guy who eats and drinks well when he's travelling. He was tired from the trip when we came back home and a little down for a couple days but now he's had five days to get back to normal so I can't use that as an excuse if things don't go well on Saturday".

"I think he can trot under 1:13"
Belker drew a perfect post two in Svampen, V75-4, on Saturday in Örebro. Torbjörn Jansson will drive him again and he will be the big favorite.
"He doesn't leave all that fast but he's learned to leave better and better with every start. I don't know how the others can leave but hopefully they've seen how good he is so that he can get to the front anyway. If not he'll sit in the two path and advance early. He's shown before that he can handle that".
"I think he has a very good chance to win. If he's not sick or the ferry ride is too hard on him, I think he can trot under 1:13, even if the Örebro track isn't very fast. He won his first start in 1:14.9 with volt start (no starting gate) and that was with the earplugs still in and he was far from tired" says Sten O Jansson.
"We'll leave from home at 6:00 Saturday morning and the ferry leaves at 7:15. That's a 3 hours 20 minute ride and we should be at the track in Örebro around 13:30 Saturday afternoon".

"Racing too often is harder on them than barefoot and American sulkies"
Any shoeing or equipment changes?
"No, he will race with the lightest pair of aluminums you can find upfront and steel swedges behind. Blind bridle again. I would have liked too race him barefoot since I think that the sport is moving forward and the horse who is trotting the fastest, wins. It's also better for a them to race barefoot so their hooves can expand".
"It's not racing barefoot or in American sulkies that hurts the young horses, it's when they have to race too often. When I started there was only one big race for the three year olds and two for the four year olds. Now it's different with big races all year long and you just can't go everywhere" says Sten O.
How highly do you think of Belker? Is he one of the best horses you've trained?
"It's always difficult to compare horses from different decades. For example, me and my dad broke Meadow Road and we've had many good horses, His Majesty for instance. But I told my sister already back in January that we already now have one who is better than your horse Super Nice. But on the other hand, I think Super Nice still has more developing to do".
Where does the name Belker come from?
"He was a character in the show Hill Street Blues from the eighties. A little guy with a moustache and cut off mittens who growled when he got upset. I thought since it's been 30 years the name should be available and I also like shorter names. Especially if there's a story behind them".

"We've gotten high offers - but he's not for sale"
Sten O Jansson also says the they've gotten several and high offers on the horse. But don't bother - Belker is not for sale.
"I don't care if they offer five millions, you don't sell your friend. We received an offer already after his first start, but the horses become our kids and Belker is Ingela's favorite. The horses are our friends and we get up every morning to feed them and talk to them and then we exercise them six days a week".
"We have a pretty big farm and we have a mortgage on it so if we would sell the horse, we don't have an income and then we can't pay the mortgage anymore. You can always make more money and I always say that I'm financially independent - I've never had any money so I've never been dependant on it".
"But Belker is only two years old and has already made SEK 300,000 and many horses don't make that in their entire career. Should he jump it off on Saturday, of course we'd be very disappointed but on the hand we know that his future is very bright" says Sten O.

Has problems with his neck and left arm
The Visby licensed trainer is running a small stable nowadays with only three horses in training and six yearlings there to be broke to the cart. Sten O Jansson has purposely cut down since he has problems with his neck and his left arm. But he's still in a good mood.
"I had an expert here looking at me who said I need surgery but then I'll be out for six months. Since the only two in the business are my wife and I, I would have had to shut the business down. I could have gotten someone else to do it for me, but then I'd rather wait and see if it gets worse. My left arm does not function and I can't lift anything with it. But I can steer OK, so I can still train horses. Had I been a driver I would've only used the right line anyway ha ha".
"I have a pinched nerve in my neck and it will never get better, but there's a surgery that will at least prevent it from getting worse. I'm in pain but that's just because the arm doesn't function, so I overload on the rest of my body and it's also started in my other arm and in a leg now. I hope it doesn't get any worse, then I will have to do the surgery" says Sten O Jansson.
"That's why we have cut down now, my wife and I. We are not accepting any new owners, just old owners, friends and relatives. It's also very hard to find help here on Gotland, the ones who are young and talented move to the main land to learn and develop, which is understandable".