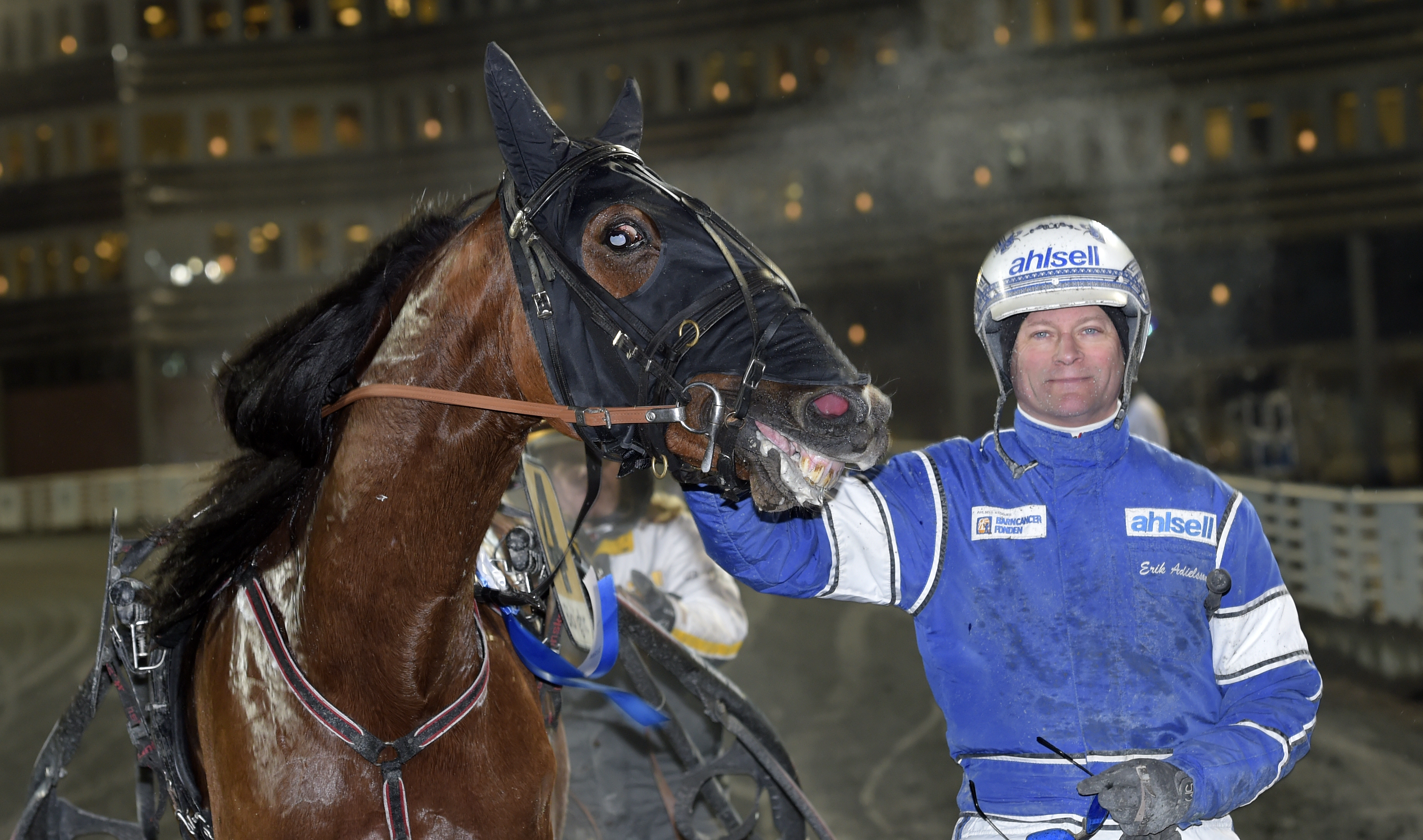 V75® jackpot: Esprit Sisu is due for a gold division win

Post positions 11, 10, 10, 12.
Esprit Sisu hasn't really gotten the chance during his first year in the gold division.
"Yes, we finally drew a good post position - this horse is due for a gold division win" says Svante Båth about Esprit Sisu who is racing this Saturday in Birger Bengtssons Minne at Jägersro as V75® comes with a juicy SEK 61 million jackpot in the pool for all seven winners picked.

The photo shows Erik Adielsson and Esprit Sisu after their win in the final of the silver division at Solvalla on December 26 last year. It was a cold afternoon but it was jokingly said that Esprit Sisu's five star effort outside the leader warmed up the connections. He won once in the bronze division and three times in the silver division. Everyone including the trainer thought he would go on to win in the gold division too.
But 2020 hasn't gone the way they hoped. After being disqualified twice, he was fifth in Norrbottens Stora Pris in June before the draw misfortune started. Four times in a row he has started in the second tier in bigger races - from post 11, 10, 10, 12 - since Kalmarsundspokalen during the midsummer weekend in June.
"It's just crazy that the horse can't draw better!" said Svante Båth two weeks ago before the start in Silverörnen at Solänget. Post twelve turned into fifth over and a splendid finishing rally to finish third.
"I was very pleased with him at Solänget. He has finished well and he has trotted fast times every darn time. We have started from bad posts in pretty much every start and we keep hoping that his luck will change" says Sveante Båth.
What if he's been due for a win for so long, that he's actually on his way down in form?
"Ha ha. That combination is no fun. But not all that unusual either. There are no indications on that happening, though. He feels great".
In Birger Bengtssons Minne (V75-5) over 1,640 meters on Saturday Esprit Sisu will start from post position two, that couldn't possibly be any better?
"Finally he drew a good post so let's hope nothing else goes against him. He really is due for a gold division win. At the same time, I know how hard it is and we might be pleased with him even if he doesn't win".
Racing Mange might be your toughest opponent and Joakim Lövgren drew inside of you. What do you think of the tactics?
"That's up to Erik (Adielsson) to decide and it also depends on how the horse gets out of the gate. It feels like we have several options. He is a handful on the track before start but we've gotten spoiled with him behaving when it's race time for the most part anwyay. I take a deep breath and cross my fingers when he's behind the gate. Sometimes he takes a bad step and then we have to stay positive. We have a good post position and he can leave fast but he doesn't need the lead. He will race the way he usually does, no changes" says Båth.
You have two starters on V75 on Saturday. In V75-2, the bottom class, you have 2 Awesome Kronos. What about his form and post position?
"Good form and good post position! If it's nerve wrecking watching Esprit Sisu before start, then I don't even know what to say about him. He came out of the gate trotting at Solvalla but I don't how many differen gaits he had before the race got started. Awesome Kronos is a bit special but if he minds his manners he absolutely has enough speed for the bottom class. He will race without shoes like he did in his last start. He wasn't all out in 1:12.4 last time and he might be able to lower his record on Saturday if things work out".
You are the reigning Derby champion after Attraversiamo's victory last year. On Sunday you can win it again with either 4 Global Adventure or 11 Bythebook who will represent your stable in the Derby final, V75-6. Your thought on the Derby?
"These are reliable and consistent horses who race well every time. Bythebook started from a bad post position but despite running into some traffic he raced well and overcame that. Global Adventure is Mr Reliable himself. But this is one heck of a Derby if I may say so. Pretty much every horse is in top form for the final. If I would bet, my money would be on Power. Robert Bergh's horse has been very good for two years now but I don't think I've ever seen him look as good as he did last Tuesday in the elimination" says Svante Båth.