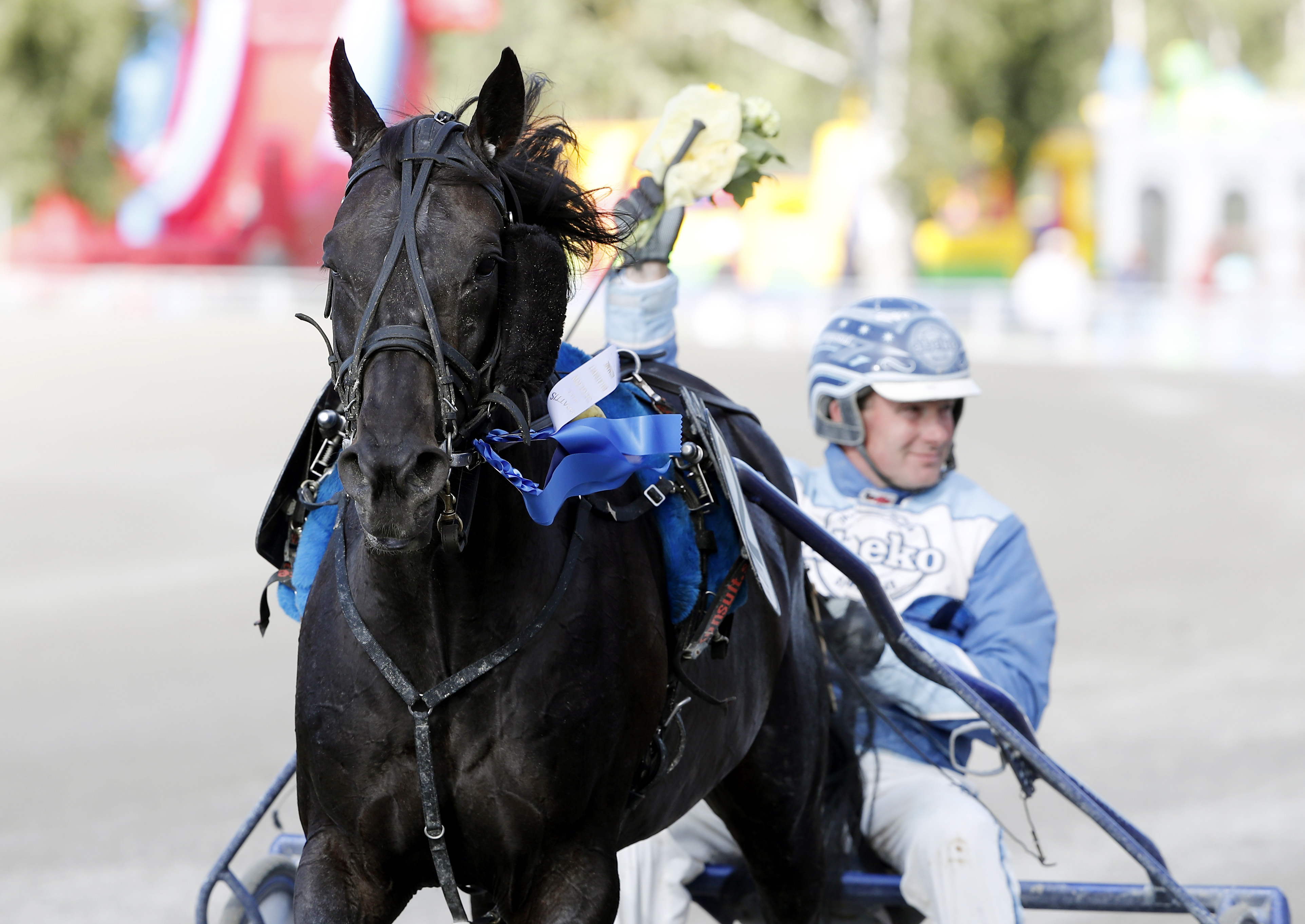 V75® (jackpot): Horpestad wants to win in front of the hometown crowd

This Saturday V75® comes to Sweden's most beautiful racetrack in Årjäng and the elite will battle in Årjäng's Stora Sprinterlopp.
Aside from that, Årjäng trainer Tom Horpestad has gotten the best horse in his stable Monfalcone ready to win in front of the big hometown crowd.
"It would be such a thrill to win and I think we have a chance" says Tom Horpestad.

Årjäng's Stora Sprinterlopp with SEK 600,000 for the winner is the Saturday feature. It will be a rematch between last year's winner Dante Boko and runner up Propulsion. The latter came flying down the stretch but the finish line saved Dante Boko who held on to win by a nose. This race always attract the stars in our sport and usually draws a crowd of 15,000 people at this quaint racetrack.
"It's a big party. Pretty much everyone living here comes to the races that day and considering there's only 10,000 people here, getting 15,000 is pretty good" says Horpestad.

"Monfalcone is in the same class - he's better this year"
Horpestad is one of six professional trainers at the track and he used to train the late Gazza Degato who won the Swedish Trotting Derby and made SEK 5.3 million. He currently trains 22 horses and the star of stable is Monfalcone who is racing in the first leg of V75®, bronze division. Monfalcone has won on V75 before and he finished third in the same race a year ago.
"Monfalcone (V75-1) was in the same class here last year - bronze division and he still fits the same class. He's better now, tougher and in better form this year compared to a year ago. He was in very tough then and raced pretty much because it was here at home" says Tom Horpestad.
"We trained him hard this past winter and we've been able to give him much more training than we ever have. I think it has made him better. He's improved with every race now and it feel like he's in top form".
"We've also been able to race him barefoot these last two starts and all the pieces are coming together for him. He comes out of the races better too now".

"One of his best races"
Two starts ago Monfalcone won in 1:12.8 over 2,140 meters with volt start. In his last start he finished second from post eleven in a new lifetime best, 1:12.3 over the mile.
"When he won in 1:12.8 it was the first time I raced him barefoot. I also took an easy start since he was a little bit pacy early on. I made a move on the backside and he won easily without being tired. That's one of his best races even if he's also won on V75 and set the track record in Åmål as a four year old".
"He raced very well in his last start too and sat way back in the field. I made my move on the backside and landed outside of the leader. He only got beat by a horse that came from behind" says Horpestad.

"Feels more stable now - more sound too"
Monfalcone will be one of the favorites in V75-1, a V75 which comes with a jackpot where one sole winner can take home SEK 26 million. The Horpestad trainee drew post one behind the gate over 2,640 meters.
"He races more often now than he has before since he stays sound now. He wouldn't hold up for it before but he's gotten stronger and more stable. So i hope he'll be even better after those starts".
"I always thought the horse could leave well but barefoot I couldn't get him to leave in volt start last time. Now we start behind the gate and I'm not sure how fast he can leave, but I suspect he can leave better behind the gate and post one fits him well. I'm happy where I'm at but I won't push him to leave and risk making a break".

"Think we can win - pull down bridle for the first time now"
How good of a chance do you think you have?
"I think the worst opponents drew badly and like I said he's still in the same class he was in a year ago and he's much better this year. The long distance fits him well and with a high pace he always has a speed left in the end".
"This is our biggest race day of the year and it would be such a thrill to win. I certainly think we have a chance to do so" says Tom Horpestad.
Any changes in balance or equipment?
"Yes, we will switch to a pull down bridle this time. We've been trying different types of blind bridles lately but we'll go with a pull down bridle this time. Other than that he'll race the same way he has raced lately - barefoot and in an American sulky".

"Very good form - she has a chance"
You have two more horses racing on V75, both in the second leg. How are their chances?
"Judys Sunrise (V75-2) won in Arvika last Friday and got enough points to get in here. She races mainly since it's at home and she has new owner, all girls and it's fun for them but we're just hoping for a check for her".
"Miss Åslanda (V75-2) is in very good form and raced against tough horses before this which I think made her a little tougher. She drew post five in volt start which isn't good for her but if she handles the start, she has a chance".