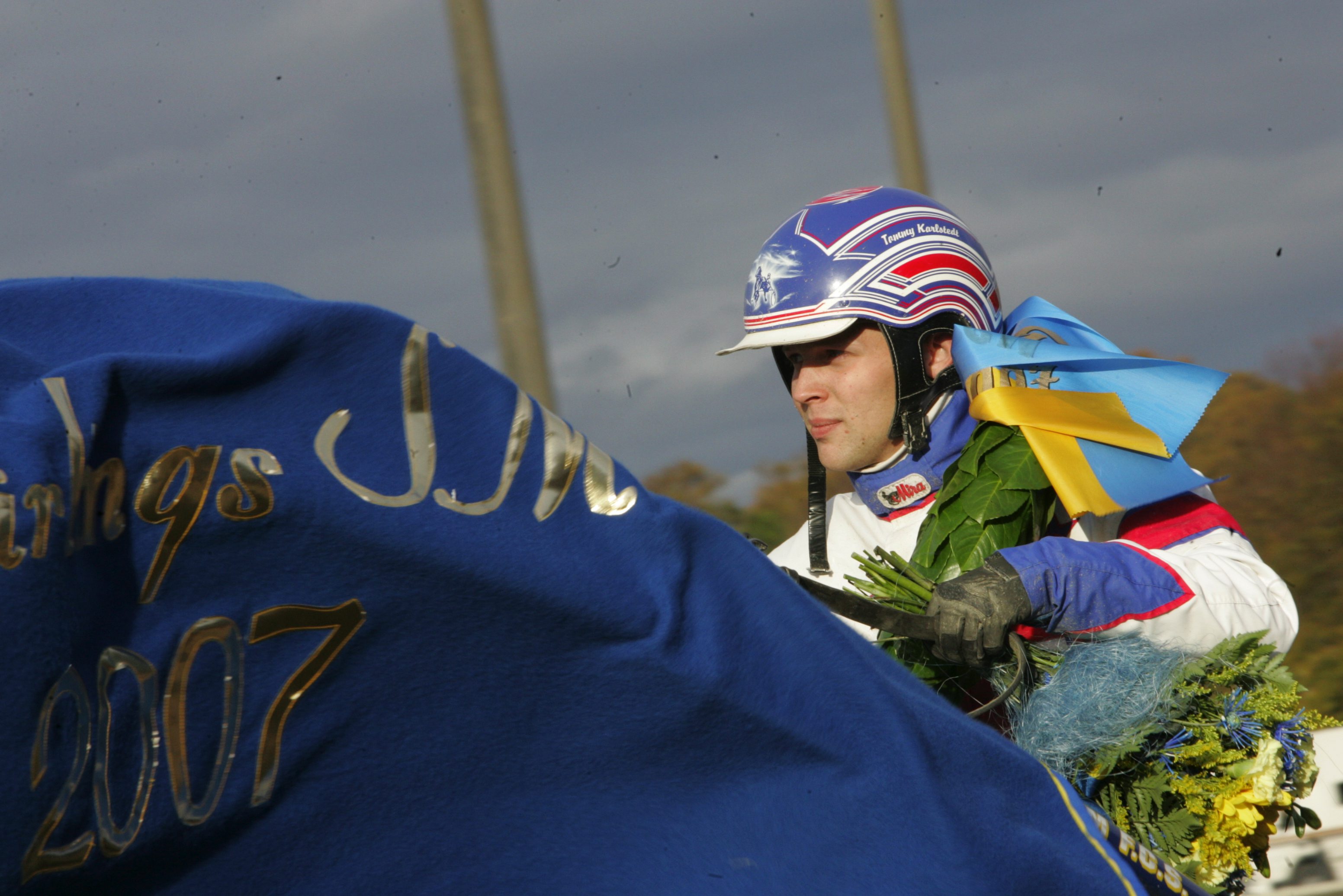 V75® (jackpot): Karlstedt off to a great start at the new farm

Tommy Karlstedt, 33 is off to a dream start with his stable after purchasing Dunevad farm.
The horses are having lots of success and on Saturday he can win on V75® at his home track Åby.
“We’ve all found a new spark and it feels very inspiring. I’m bringing two horses in top form and Am I Wrong definitely has a chance to win” says Karlstedt.

In October he finalized the purchase of the big farm and training center Dunevad in Fotskäl, 50 kilometers southeast of Åby racetrack. Tommy Karlstedt is in his seventh year as a trainer and made the move from the farm Veka in Falkenberg. Even if he’s increased the earnings every year, Tommy has had a few tough years as a trainer.
“It started off well and the first two years were positive. Then we battled with sickness and couldn’t get the horses healthy. That made my clients lose their patience and we had to make some changes in our lives to get back on track again” says Karlstedt.

“Great opportunities- the horses have delivered”
After the purchase of Dunevad farm things are definitely going in the right direction for Tommy and his business. After the move he’s won five out of six starts and finished third once. So he’s off to a dream start.
“It’s been uplifting for all of us. I have nothing negative to say about the farm we were at before but here it’s new routines, new tracks and a new environment. The horses have responded well to the change and that feels great for me and my girlfriend after making this kind of investment. You get happier and more energetic and it feels inspiring” says Tommy.
“It’s a great training center and opportunities to train are complete with a sand track, a well banked 1000 meter track, a straight track and jogging trails in the forest. It feels great the the horses have won so many races already since we only have a handful of racehorses. They’ve really delivered and done all they could. They’ve responded well to the new training routines we’ve given them”.

“Have gotten horses in training from Robert Bergh”
The farm is located well with Gothenburg being a 40 minute drive away. Robert Bergh is the neighbor and he’s only 900 meters away. I’ve gotten 18 yearlings in training from Robert to break and train down and it felt good getting that opportunity”.
“My plan is to rent out a part of the farm to another trainer since I can’t fill up the 90 stalls myself” says Karlstedt who has 35 horses in training.
Before Tommy Karlstedt opened up his own stable he worked for his dad Ralf Karlstedt, plus several years for Hand Adielsson and for Kari Lähdekorpi. He was then viewed as one of the biggest talents in this sport with a bright future and he won a lot of races too, Swedish championships for lad jockeys to name one.
“When I was young I worked with dad but it’s my years with Hans that have characterized me the most. I got to drive a lot working for Kari and be a part of a different concept there too” says Karlstedt.

“Fought until the last stride - the best race of her career”
V75® this Saturday is being held at Tommy’s home track Åby and it comes with a jackpot where a possible sole winning tickets will be worth at least SEK 48 million. Karlstedt is racing two horses, both in the same race, and he thinks one of them has a chance to win. That horse is Am I Wrong who is currently riding a two race winning streak.
“Am I Wrong (V75-6) was very good when she rounded a thirteen horse big field two starts ago but her last start was a gigantic improvement when she won in 1:11.8. She trotted the last kilometer on the outside of the leader and fought until the last stride and that was the best race of her career so far. She showed qualities she hasn’t shown before.
“After an effort like that you really want to try her on V75 even if the race is much tougher this time. But if she could come up with the same type of effort again I think she has a chance to win”.
“Post six is a bit to the outside of the gate but she can leave pretty well. Racing with shoes now is nothing I feel beaten down by, even if she usually races barefoot. Most likely she’ll race in an American sulky on Saturday. She has raced in it several times so it’s nothing new, but compared to the last few starts it’s a change”.

“A good sweep down the backside”
“Amphibian Madness (V75-6) won at Axevalla two stars ago when she sat fifth over as the pace was slow, 1:19 the first 1,500 meters. She did a good sweep of the field down the backside and fought all the way to the wire. To sprint full speed like that for 700 meters hasn’t been anything she could do before. She raced good at Mantorp when she finished third in her last start too after going straight to the front from post seven behind the gate on a track that wasn’t fast at all and she was pulling a bit during the race by she fought until the wire there too. Post twelve on V75 is a tough task and she needs a very high pace to get in to the race. No changes, except for a new driver even if André has driven her before. I’m bringing two horses in top form” says Tommy Karlstedt.