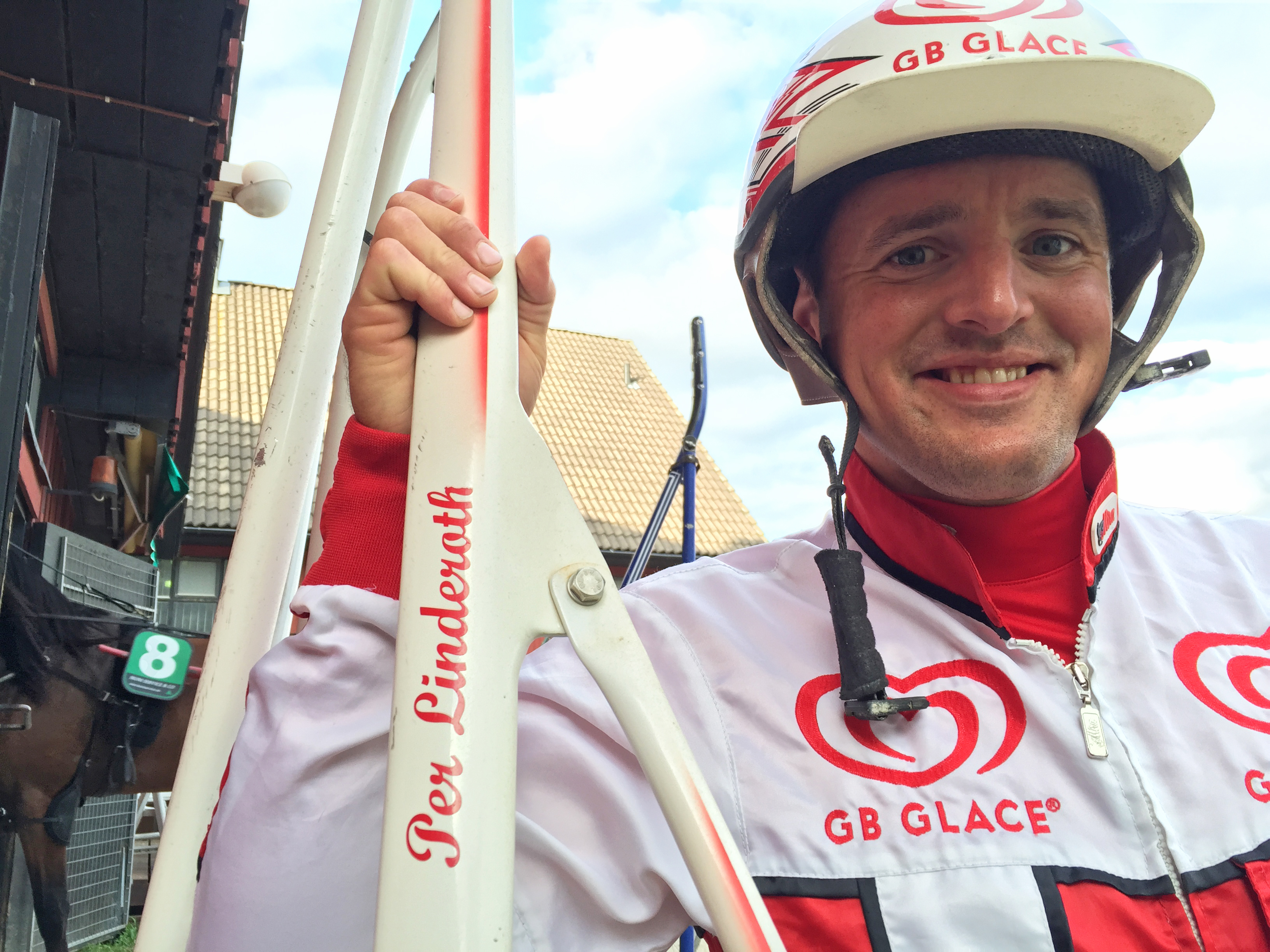 V75® (jackpot): Linderoth’s pick is not the one you think…

Per Linderoth will send out three horses from his stable on V75® at his home track Bergsåker in Sundsvall.
Donners Am is one of the best horses he has trained but since he seems to be followed by bad luck the trainer instead nominates another horse as his best chance on Saturday.
“I’d like to be at least a little bit optimistic with Walkie Talkie”.

The winter is sneaking up on us and as of December 1 it’s not allowed to race barefoot in Sweden. Per Linderoth with his stable in the village Mellangård just west of Sundsvall is racing four horses on Saturday, of which three of them are racing on V75®. Five year old gelding Donners Am has always been considered promising and is looking for his fourth straight victory in the bronze division, going off as V75-1. His trainer opts to lay a tad low this time though.
“Sure he can win, but he’s got bad knees and they bother him now and then and I’m a bit afraid I’ll be disappointed if I’m super optimist with him again” Per says.
According to the trainer his best chance is instead in V75-6, a race for mares, where four year old mare Walkie Talkie fits the class perfectly. Had she had another SEK 5,000 in earnings she would have had to start with a 20 meter handicap.
“It feels like she should have a decent shot at least. My only worry is that she hasn’t raced in a while. She had problems with her throat when she was supposed to race back in early November so she hasn’t raced since the end of October”.

Locked in at Solvalla
Walkie Talkie raced against Vamp Kronos and others in the Breeders Crown semi final for four year old mares at Solvalla. She was steered down to the pylons early on and never found a way out.
“It was a chance I took but my only chance against those horses. She finished well in that race. Last Friday she trained at Bergsåker in 1:25 so everything is well with her now” says Per Linderoth fresh off a vacation in the Caribbeans when we reach him this Monday afternoon.
Walkie Talkie can leave pretty well according to trainer Linderoth and maybe she can hold off the better mares handicapped behind her. She races best barefoot but it’s the same for everyone now when it’s not allowed during the winter months.
According to the forecasts this week will start off mild with some slush and slowly get colder and this weekend the temperature will be around -10 Celsius.
“If the forecasts are right it sounds like we’ll have to race with corks behind at least. But we know the conditions - it’s December and we’re in the northern part of Sweden so it’s no surprise”.
How does she handle racing with corks in her shoes?
“There are others who are also at a disadvantage racing with shoes but I’m sure she can handle it. Walkie Talkie is a genuine mare to work with and she’s taken big steps forward this year and I don’t think she has reached her full potential yet. So I’d like to be a little bit optimistic” Per says.
One could easily think you’d have higher expectations with Donners Am (V75-1). He looks like a super star but hasn’t gotten there yet.
“He’s a strong horse and one of the three best horses I’ve ever trained, but he hasn’t reached the stars yet. He’s getting there and this year I think he has developed nicely”.
He’s coming in with three straight wins, two under saddle and one in between where he won a cheaper race at Östersund’s lunch races a month ago.
“Yes his form is good and he was good in that race. But he’s had issues with his knees for a while and this winter we will do surgery on him and get him real good for next year”.
How do think he’ll do on Saturday?
“He has no issues right now and he too was at Bergsåker and trained in 1:25 last Friday and was good. He likes the distance and he should be able to handle post two. So the conditions are pretty good and he should be on the V75 ticket”.
And finally three year old Buzzer Beater will face older rivals in the Class I race (V75-5). You were unlucky in the draw and have to start from post eleven behind the gate...
“There aren’t many more races for three year olds now as he’s made SEK 450,000. So I have to race him against older horses. This class is up to SEK 500,000 lifetime and on our home track so that fits him well since he needs to race before the ‘E3 rematch’ at Bergsåker on December 19. We won’t have any chance if I try to go around the field from here and if I stay in that might work one out of a hundred times. So I have to lay low” says Per Linderoth.