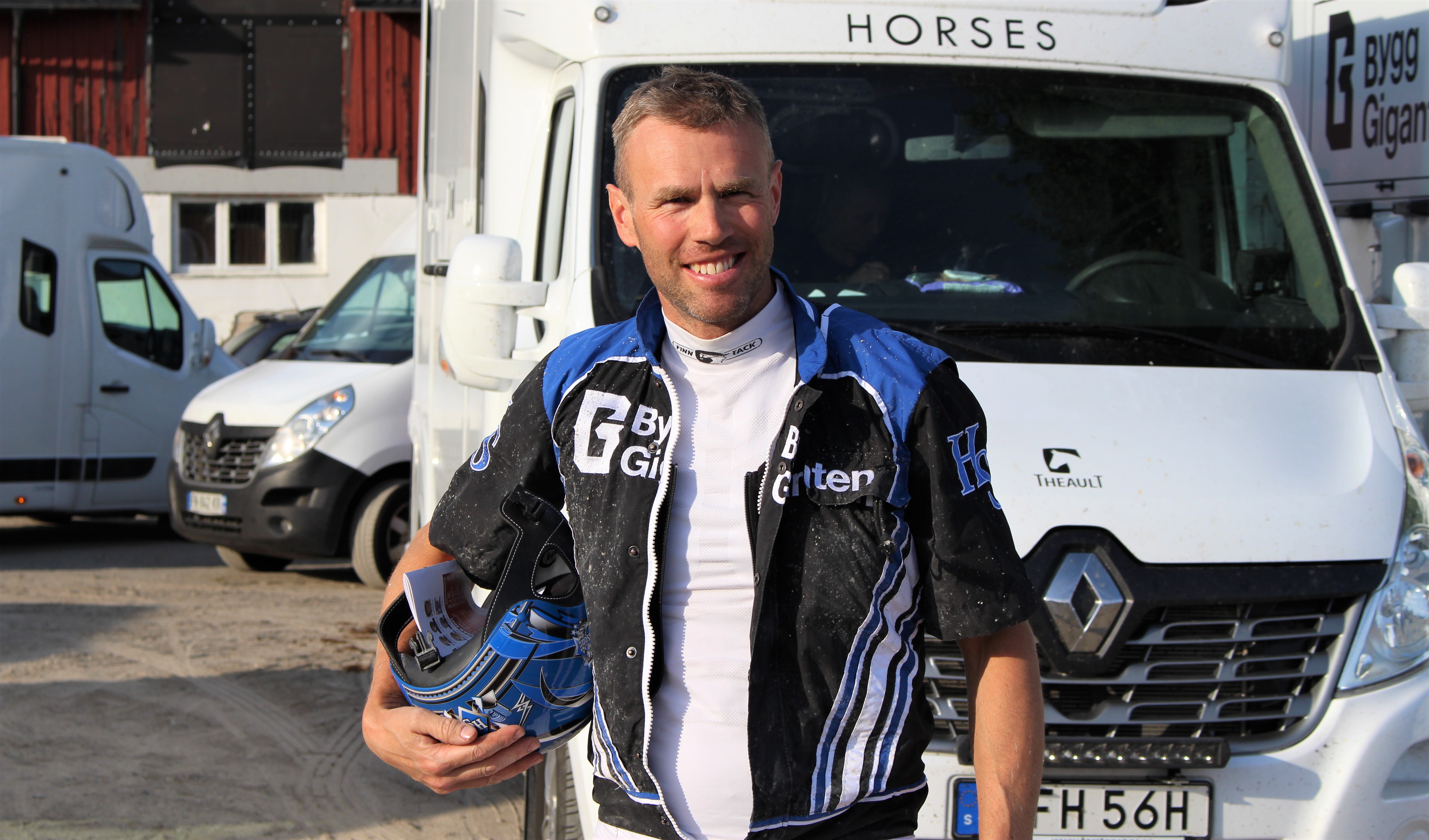 Less horses and a newly built training track.
Those two things have turned the Henrik Svensson stable into a winning machine.
On Saturday they chase new victories at home at Bergsåker.
"Of course, we have aimed at this day. It's our biggest race day of the year" says the home town trainer.

A win in every fourth start.
That is the Svensson stable record for 2022.
A complete turaround compared to the miserable year of 2020, which ended with a win percent of five and less than SEK 1 million in earnings.
That was a huge miscalculation which made Svensson look over his training routines and invest in a very uncommon kind of training track.
Uphill training is a proven concept, not least in the Matfors area where Henrik Svensson has his farm.
It was in that hilly area that Åke Svanstedt shaped his early stars, including Zoogin.
Stefan Hultman's great trotters like Maharajah also got their strength from training uphill.

Uphill and sand track in one
The new hot concept though, is training on a deep sand track where Daniel Redén is the figurehead who shapes world class trotters constantly on his sand track, just north of Enköping.
What these two methods of training have in common is that you can build strength without having to train at high speed.
That is something that Henrik Svensson took into account two years ago when he started to build his version - an uphill sand track.
"I have always had a very nice, firm uphill track, but I decided to try to have another uphill track and to make that one a sand track as a complement" Svensson explains and adds:
"It is only 300 meters long, but it's enough. It's very heavy training and even though we go very slow - around a three minute kilometer rate - they still get tired.
How many intervals do you train on the uphill sand track?
"We alternate with the other uphill track, which is 600 meters long. All together they train ten intervals, five on the firm track and five on the sand track. With pretty short time in between each interval".
Which difference do you notice in the horses?
"That they get stronger. Most of all, you notice it when they race. They have more stamina. I think it works very well".

Would like some new horses in training
When the results descended, the stable lost a lot of horses.
Now, the Henrik Svensson stable has 18 horses.
"We had a lot more horses earlier, but it has been tough to get new horses the last couple of years. However, I think the quality of the horses is better this year and you can tell by looking at the results, too. I am very pleased with the current win percent, even if it has dropped below 30 now. At the same time, I know that it's very hard to maintain such a good result unless you constantly get new horses. If they race well and make good money one year, it's tougher to get the same results next year in a higher class. With that being said, I am pleased with how the stable looks today, even if I would like to get some new horses through the doors".

Got him sharpened up on the straight track
V75® is coming to Bergsåker, their biggest race day of the year.
Henrik Svensson has entered two horses, who both have been aimed at this particular day for some time.
"Yes, this is definitely a weekend you want to race and that you make sure your horses are ready for. It's our biggest race day of the year and we will have something for the owners in the stable area. Then you want your horses to race on top of their abilities, of course".
First one to race is the winning mahcine 11 Underbarosåfin (V75-1) who has won 9 out of 19 career starts and last time time out, he crushed his opponents in a semi big race at home, despite a 40 meter handicap.
"I was very pleased with him, except in the first turn when he was running in hard and he even made a short break. It's a peculiarity he has and it's too bad that he drew that post since it gets worse behind horses and when he is towards the outside of the track. If he is down by the pylons, he is fine and he is best in the lead. We won't get there this time, but he can close too. He showed that two start ago, when he was flying across the finish line".
Have you done anything to get him extra sharp for this start?
"He really is not the type of horse you try to sharpen up in training since he can get a bit hot and he always trains behind horses. But last Sunday he got to train on the regular straight track, for the very first time, he only trains on the uphill tracks. He trained behind another horse and he was actually very nice and relaxed, which was good. I can't promise it will make him better for this start, but I hope so. We are not making any changes and the post position means that he needs a lot of luck to have a chance to win".

Was perfect without shoes
It sounds a lot better on 6 Mon's Tornado (V75-2), a four-year-old who joined the Svensson stable early this year without much of a record and he has never finished worse than third for his new trainer. Last time out, he finsihed third in a V75 race and closed well after having some traffic trouble early on.
"We tried him barefoot in his last start for the first time and I was very pleased with the outcome, so he will race like that on Saturday again. Four weeks is actually a bit too long between starts, but he trained with Underbarosåfin on the straight track and he also felt very good so I count on his form being the same. He should not be worse than he was in his last start".
All his wins have come from the lead or outside of the leader, what is your tactic?
"Unfortunately he doesn't leave very fast, so he has no chance of getting the lead. But I will leave as fast as he can to get as good of a position as possible. I think he is a horse who should be good enough on V75 going forward and he is my best chance on Saturday. No changes on him either" says Henrik Svensson who also is the regular driver on Lars Wikström's 10 Gumman Sisu (V75-4).
"She has developed a lot since she came to Lars. She was a horse who started in the bottom class and we didn't have a lot of hopes for her, but she has steadily gotten better. But I think that she has raced best when she has been involved early, in the lead or in the pocket and we won't get there from this post position. But things can work out from these posts too, so she is not completely out of it thanks to her good form".