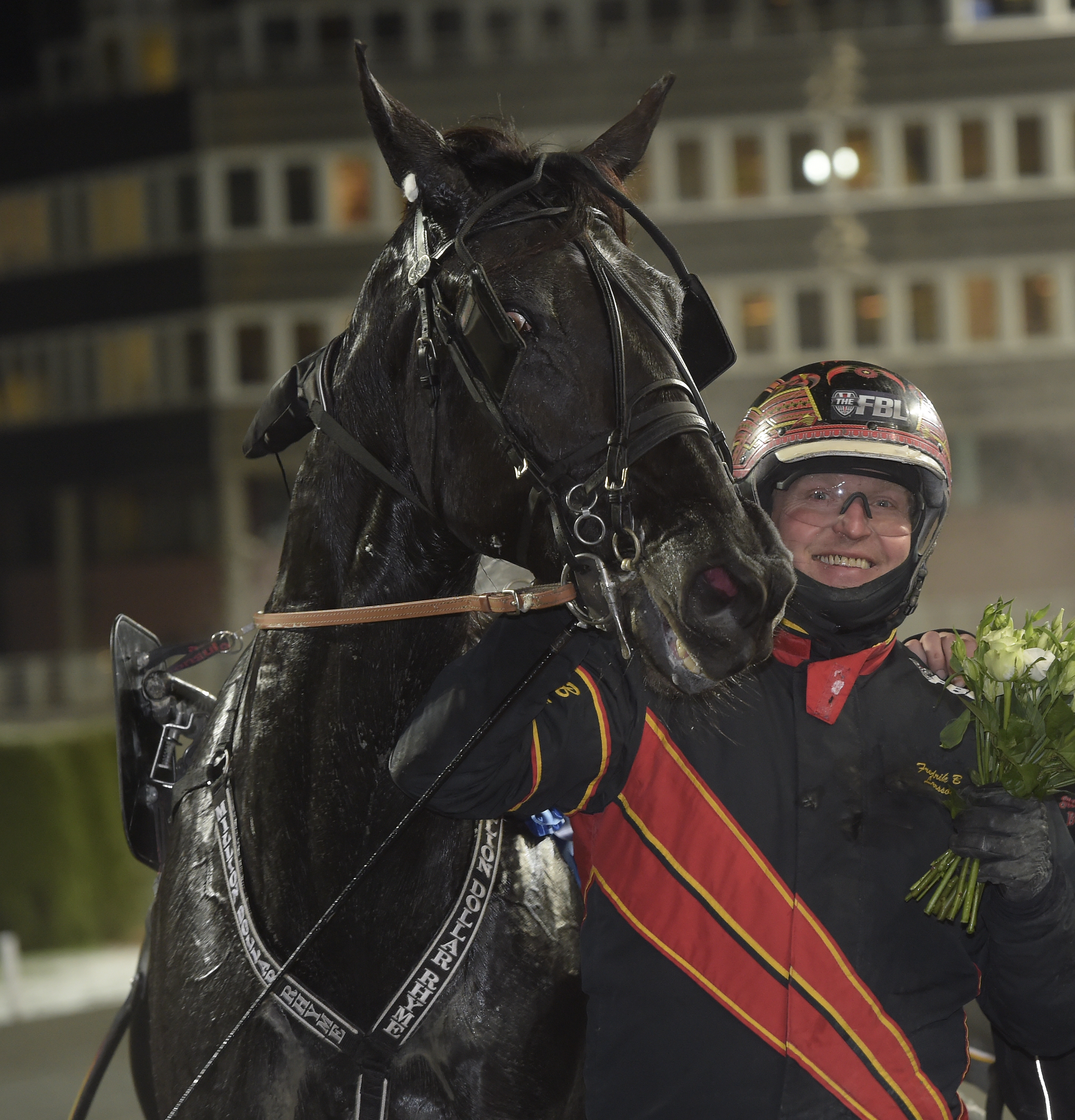 A stable in top form and a star in the making.
Fredrik B Larsson has downsized his stable and is looking at a bright future ahead.
"Saturday will be very exciting" says the Solvalla trainer who has two starters on V75® at Umåker.

His career has been long with many highs and a also some lows.
If the last few years had more of the latter, the future sure looks bright for Fredrik B Larsson stable today.
A stable that's been downsized to 20 horses.
"We've had less success for a while which has meant that we've lost some horses. At the same time I've purposely tried to raise the quality, we've had too many years with not good enough material to work with. That meant that we are down to 20 horses now. Something I don't feel bad about at all" says Fredrik B Larsson who can look back a great month of March where the stable won a third of it's 15 starts.
"Of course you want to get new horses in to your stable, but I don't complain about the 20 I have now. Most of all it's a lot of fun going to work every morning to train them. We're a small, close-knit team and we enjoy working together. It also means we have more time for each horse, which I really like".
The horse who is predicted as the next star in the stable is also the one catching peoples eyes for Saturday's start.
After a magnificent 2019 debut, Milliondollarrhyme will be the giant favorite in Berth Johansson Memorial (V75®-1) for five year olds with SEK 200,000 to the winner.
"My horse feels perfect. He's always been very talented, but he's big and he needed a lot of time. After this past winter I can feel thats he's ready. It's going to be exciting".

"Incredibly similar development curves"
If you want to compare careers, Milliondollarrhyme's first seasons on the racetracks has a lot of similarities with Fredrik B Larsson's perhaps biggest star, Giant Superman. He didn't stand out as a three year old either, was raced more on V75 than in stakes races as a four year old, finish third in his Derby elimination and won a final of the Bronze division at Solvalla in October.
"When you read it to me like that I have to admit it's kinda funny how incredibly similar their development curves are" says Larsson who opted to put Milliondollarrhyme away for the year after winning the final of the Bronze division at Solvalla in November.
Giant Superman went on to Paris at that time, where he won two races at Vincennes.
"We discussed taking 'Million' to Paris too, he was so incredibly good in his last start of the year. But he was still a little gangly in his body and I thought he'd be better off with a winter of body-building training instead. So he was put away in perfect condition".

How did his winter training turn out?
"Very well. It hasn't been an easy winter for training horses with all the weather changes, but we've been able to train the entire winter and 'Million' has progressed exactly the way I wanted him to. He's done growing and has become much stronger. We've worked a lot on keeping him quiet and there's an incredible difference in training. He was also very relaxed in his seasonal debut".

Did you expect that kind of performance in his seasonal debut?
"He had been very good in training but since he had only trained strength I wasn't sure if the speed was there. But it sure was. He's essentially a very fast horse, he always has been".
Are there any other similarities between Milliondollarrhyme and Giant Superman?
"Exteriorly, no. 'Million' is significantly bigger and therefore later to develop. Giant Superman got his career going late due to an injury as a three year old. Gate-wise they're very much alike though. They both have that efficient, energy saving way of trotting".
Do you see the same type of development ahead for Milliondollarrhyme?
"I would say so yes. 'Superman' was very tough mentally and developed by racing against the elite of trotters. Milliondollarrhyme hasn't faced the best yet so it remains to to be seen if he also has that quality. But like I said, he does have enough talent".
Do you remember what Giant Superman did this weekend as a five year old?
"Yes, now I do. He won Guldbjörken. That was his first start in the Gold division. He was fantastic that day and beat Hilda Zonett. Maybe I should have entered to Guldbjörken instead..but no, than we would have been in against Propulsion. That can wait".
Giant Superman went on to race in Sweden Cup where he finished second to Digger Crown.
"I wanted to race in Elitloppet, but we didn't get an invitation. We got it the following year instead".

Does not want to leave
In Elitloppet as a six year old Giant Superman got his major breakthrough when he rallied to a second place behind Steinlager.
Which race do you think Milliondollarrhyme will be in come last weekend of May this year?
"I don't know. I haven't thought that far ahead, I've only thought about this race at Umåker".
What are your thoughts on the race this weekend?
"My horse feels perfect after his seasonal debut. The most important thing is that he stays quiet, then he should be at least as good as in his last start and be battling for the win".
Is this a good opportunity to try to leave with him?
"No I don't think so. I've only tried leaving with him once, at Örebro last summer. He just blew right by Chianti, but then he took off and I couldn't stop him. Same thing in the Breeders Crown semi final last fall. My plan was to just advance up outside the leader in the middle of the race and sit there by he took in a 1:06 speed, it wasn't a fun race to drive".
So you want to save his speed as you did in his seasonal debut?
"If it plays out that way, I would like to. But he has become much more quiet in training. I want him really lazy in the warm up, then I would feel comfortable making an early move if I have to".
He has raced exclusively with shoes and in a regular type of sulky, how come?
"I haven't wanted to try anything else, it's too early for him. He would be perfect barefoot but we'll wait with that. He has a long career ahead of him. We won't make any changes from his last start".

Want to pull the shoes
Full speed ahead from the start seems to be the plan for the other horse from stable, Havbergs Knight (V75-7), who has raced well on V75 lately.
"He developed throat issues last year and we did surgery on him last fall. It was successful and he's gotten better and better with each start since. We finally drew a good post position and it wouldn't hurt if we could get to the lead, he fights tough there" says Fredrik B Larsson about his horse who hasn't raced barefoot since the throat surgery.
"Saturday might be a good day to do that, depending on how the track is. He's got sensitive feet so I won't gamble with that, but if the track is nice and fast I'll pull his shoes. It feels like a 50/50 today wether I'll pull them or not. Other than that we'll keep the same regular sulky and the can't see back bridle".
Could he win too?
"It looks interesting, He should be able to finish top three and his chances increase if we can get to the lead".