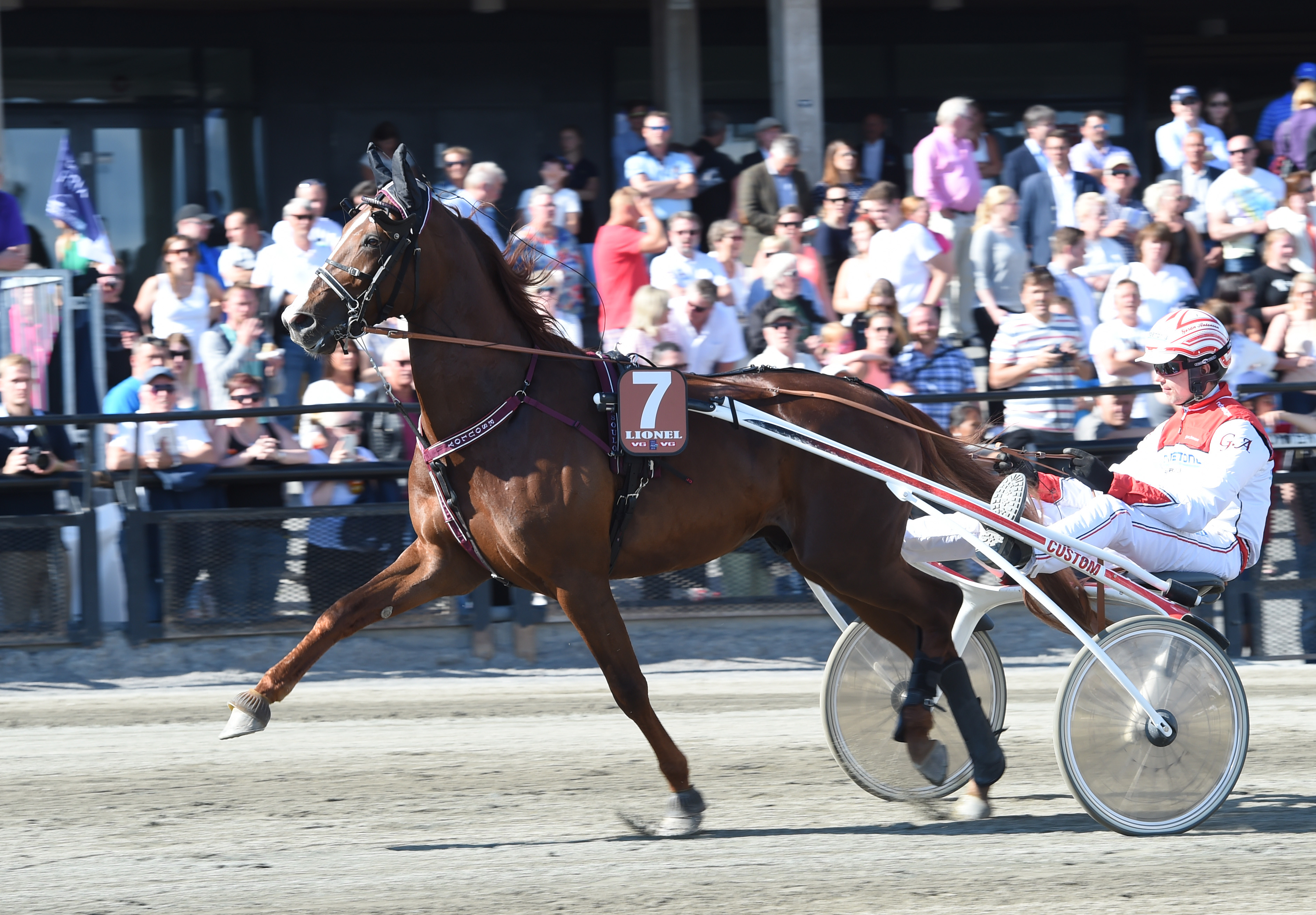 On Saturday Lionel will make a form of rehearsal for Prix d'Amerique.
The chestnut will make his final start before the toughest trot race in the world as he will race in the gold division at Bergsåker.
"On a scale from one to six I would say his chances to win are a strong five" says owner/driver Göran Antonsen.

It's less than a month to Prix d'Amerique which is held the last Sunday of January.
Last Sunday Bold Eagle won Prix du Bourgogne before Readly Express.
In two weeks the last B-race, Prix de Belgique will be raced.
A horse who is getting ready for the big battle at Vincennes in Paris is Lionel. But the plan is not to race in the preparing B-races at Vincennes. After returning home from United States where Lionel raced very well to finish second in the International Trot at Yonkers, he also finished second to Global Trustworthy in the gold division at Bjerke, Oslo. He followed up by winning a gold division at Mantorp in his most recent start.
"It was a very nice race for Lionel in his last start. He felt great and he raced with shoes all around. He's much better barefoot so that was very pleasing. We got the lead early and he won without being tired" says Göran Antonsen.
"The most important thing for me was how the horse felt since I was a bit disappointed with him in Oslo. But that track started freezing right before the race and maybe he became a bit foot sore. Even if he raced well and finished second I wasn't entirely pleased with him. He wasn't on top but it was also his first start after the long trip to Yonkers and back".
"That's also why it was so pleasing that he felt very good in his last start and was back to his old self again".

"Not many horses are as complete as he is"
Lionel is the horse who last year won his Elitlopp elimination and finished fifth in the final.The year before that he won the Olympic Trot and finished third in Prix d'Amerique. He has won over the mile as well as over four kilometers when he won Prix de Paris. The eight year old stud horse has finished top three in 42 of his 72 lifetime starts.
"Not many horses are as complete as he is as a racehorse. He has an incredible average, SEK 230,000 in earnings per start and he's won on all distances and from every position you can imagine. It's crazy. He has the most important qualities such as the strength, the will to win and the lung capacity" says Göran Antonsen.

"Will focus entirely on Paris after this V75® start"
Lionel is now getting prepared for his fourth start in Prix d'Amerique. But the people closest to the horse, including trainer Daniel Redén is choosing a different route to the race.
"The race this Saturday is another step on the way, it will be his last start before Prix d'Amerique. After this race the focus is entirely on Prix d"Amerique. We've chosen to train and race at home instead of going to Paris long before the race. Now we'll go the week of the race".
"Should he race well in Prix d'Amerique he might very well stay for more races afterwards. There's Prix de France and also Prix de Paris, which he won two years ago, where he could race. But that's up to Lionel" says Göran Antonsen.

"I think I can outleave Zenit Brick - could be the key to the race"
But first he will race in the gold division at Bergsåker where Lionel drew post seven behind the gate together with driver Göran Antonsen. Göran knows what needs to be done since the toughest opponent Zenit Brick drew post five, inside of Lionel.
" Lionel (V75-3) is quicker out of the gate than most people think, but I've only really left hard with him once. That was in the Elitlopp elimination and he's pretty quick out of the gate. The post position can get us in trouble but the way I see it I have to leave all I can and try to get past Zenit Brick and Örjan Kihlström in to the first turn".
"I think Lionel is quick enough to get past Kihlström's horse and that could determine the race. Whether he gets the lead or not, I have a good feeling going in to the race. If he's going to have any business racing in Prix d'Amerique he needs to be there battling for the win in this race regardless which trip he gets".
How good do you think his chances are to win?
"On a scale from one to six I would say it's a strong five. Lionel belongs in the world elite and he must have a very good chance to win here" says Göran Antonsen.

Will drive Lionel himself in Paris
Antonsen has decided to drive his super star himself this year in Paris - just like he did last year.
"I see no reason not to drive myself. You don't get many chances like this in your life and you have to have fun with it too. And I'm having so much fun driving this horse. I drove in a couple of the big races at Vincennes last year and I know my mistakes and I will come better prepared this time. The driving style down there is totally different to what we are used to here.
"There are people who like the fact that I drive him myself and there are also people saying I should use a top driver and that I would make more money that way, but I think Lionel and I work well together and I don't think I've made that many mistakes behind him" says Göran Antonsen.