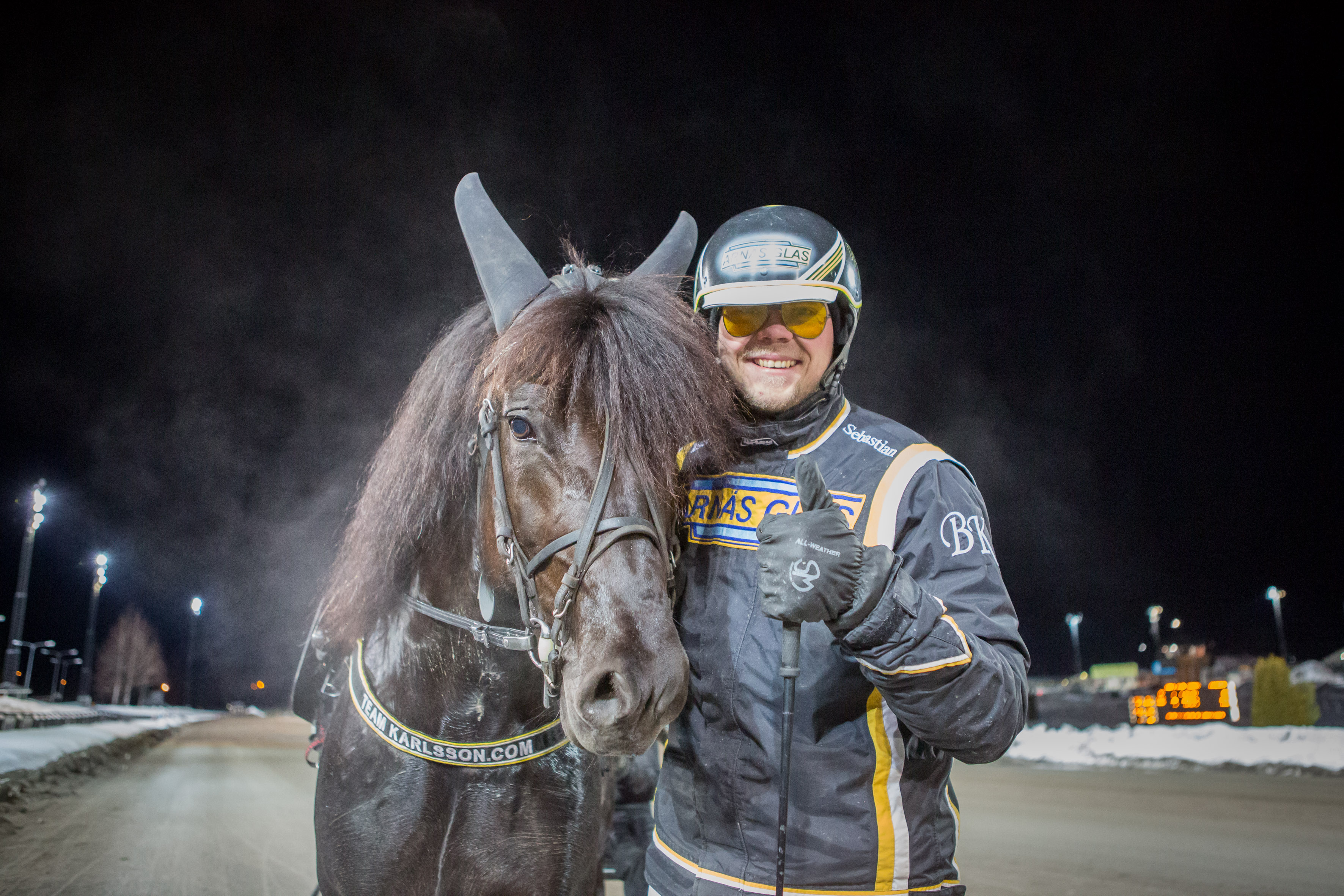 He chooses which horses to train.
And which races are worth going for.
Saturday is one of those times when Backegubben is racing in the final of Dubbelcupen.
"This is the race we've aimed for all spring, it's now he's supposed to win" says the coldblood specialist Björn Karlsson.

In Tangen Haap Björn Karlsson has one of the best coldblooded trotters in the country and his aim is set at the most important race of his career - Elitkampen at Solvalla.
But for the stable's future star Backegubben the race of the year comes already this Saturday.
The final of Dubbelcupen is what Björn Karlsson has aimed for with his five year old, who made breaks in both legs and almost missed the final.
"He's very tricky in the start and I haven't even been close to getting him to trot. But now I know where his limit is and I'm 99.99% sure he'll come out of the start trotting" says Karlsson who has 14 horses in training, but he practically only trains ten of them.
"My dad is responsible for four of them, including the warmbloods. I've never really liked warmbloods, I think they are boring, but maybe it's because I haven't sat behind the right one yet".
So if someone has a nice warmblood they want you to train you'll say no thanks?
"Most likely. But first I would evaluate the horse and see if it's a better horse than the ones I currently train. I don't want more than ten horses, so if I take in a new horse, someone has to go".
Does that mean there's a waiting list to join your stable?
"You can say that. It's a bit of a luxury. But on the other hand I rarely get the first bid on a horse. Usually they have already asked Jan-Olov Persson and Oystein Tjomsland. When they say no they call Karlsson".
Why don't you want to have a bigger stable?
"It's not for me. We had 15-16 horses for a while but I didn't think it was any fun then. I have to have that personal connection with each individual. When I worked as a caretaker for Robert Bergh we got new horses every week. I had to use different colored tape on them to know who was who. They were all just brown horses to me".

Last bloodline from Nordgubben
Björn's dad Kenneth Karlsson trained for a period of time two of Sweden's best coldbloods, Svinten and Nordgubben.
It's in his footsteps Björn has chosen to walk when he became the country's youngest professional trainer ten years ago.
A step he seems to regret taking.
"Yes. looking back I think I was a bit to anxious to get started on my own. I should have waited a few years and been around to other trainers like Jan-Olov Persson and Åke Svanstedt to learn how to train. The only education I got except from my dad, was the time spent working for Robert Bergh. I guess it's only the last three, four years I've really known what I'm doing" Karlsson says laughing.
That Backegubben means something extra to his trainer is also due to his bloodlines.
The dame Norm Tora is the only horse remaining of Nordgubben's breeding legacy.
"Unfortunately Nordgubben was pretty much sterile. He only had three offsprings and the only colt died at foaling. So it's up to Backgubben to keep his legacy alive. Regardless of how his career works out we will let him breed a couple mares in the future".

"The best horse"
But now the focus is not on the future, it's on Saturday.
Backgubben showed his class when he won against tough horses back in March, but now he has two consecutive breaks in the start.
But Björn Karlsson sounds totally convinced that it won't be a third.
"Now I've tested out different balance on him and I know where his limit is. For this start we'll go back to what he raced with before the race at Bergsåker. It means 800 grams extra on each front hoof. We'll also go back to the old sulky instead of the Swedish made version of the American sulky he's raced with the last two starts. Those changes in combination with the fact that the post position is the best possible this time make me say I'm convinced he'll stay flat this time".
Won't the changes limit his capacity?
"A little bit yes. He won't be as quick-footed with all that weight on. But when he won four starts ago he trotted 1:21 speed last 700 meters with these ski boots on and that speed will do here too. He will also race barefoot behind so it will the exact same balance as when he won Greivin Memorial at Boden last year".
Are you going to sharpen his form any for this start?
"Yes, this is an important race so we'll do what we can. He will get trained a bit tougher on Tuesday and Thursday, that should get him in better form. Before the last two starts he had only done heavy training so it will make a big difference".
Is he good enough to win this final?
"Yes. I'm certain I have the horse with the most ability in the race. There's always a risk of something happening when you have that many horses to go around. But I think he'll do it" says Björn Karlsson.