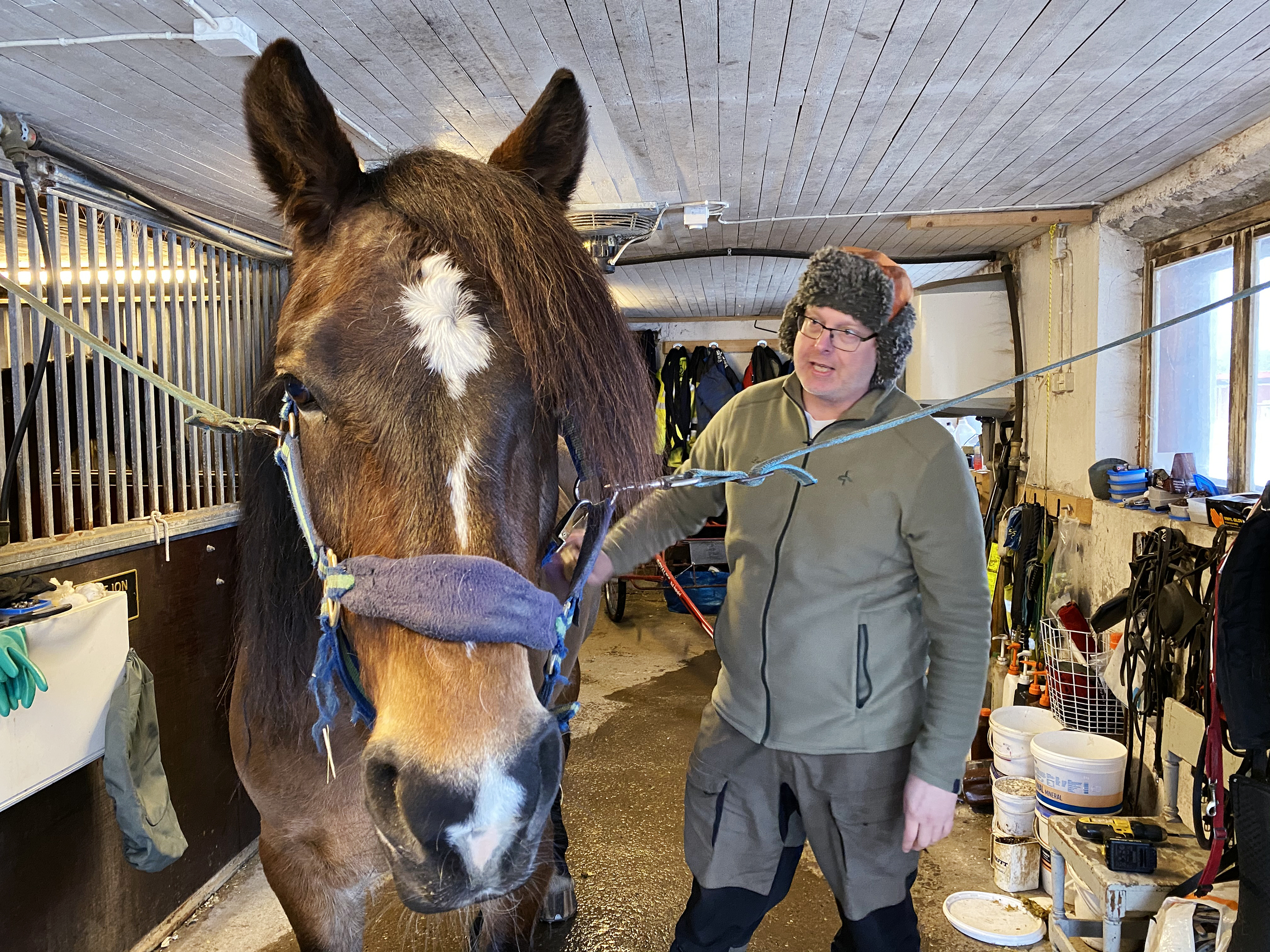 Don Viking has stepped up as one of the country's top two or top three coldbloods.
The once injury-prone horse has been sound the last few years now and at age 13 'The Viking' can once again win on V75 – this time at Bollnäs on New Year's Day.
"I think he is one of two horses who can win the race" reasons Stefan Dellbro, the horse's trainer and also a professional handicapper.

As the V75 cavalcade is being concluded with the big multi jackpot at Halmstad on New Year's Eve, the wait for the next race card won't be long in Sweden.
On New Year's Day, Bollnäs opens up their gates for a regular V75 card with the first leg set to go off at 16:20.
A couple of the races are open for coldbloods. In V75-2, the more experienced horses square off, where the ones who have made over SEK 1.6 million start with a 20 meter handicap. Don Viking was sent to amateur trainer Stefan Dellbro back in 2018 and has the last three seasons made around SEK 600,000 - 700,000 each year.
The Viking is the king of monté among the Swedish coldbloods with two wins in the national monté championships together with Lena Fritz. In the 'real' national championships, Don Viking has finished second and third the last two years behind the dominant Månlykke A.M.
Stefan Dellbro has been asked the question before and we ask him once again. Which discíplin is his best, racing under saddle or in a sulky?
"The competition is not as tough in monté. But maybe he is slightly better under saddle. It feels like his gait is different under saddle, but he also gets a lot more confident when he feels that he can beat them. He is among the top five coldbloods in the country and under saddle, he never has to race against anyone who is even on the top ten list. So the competition is a big difference" says Stefan Dellbro.
An issue with frozen pipes
The Umåker-licensed amateur lives in the village of Långed, 40 kilometers south of Umeå. When we reach him Monday morning, Dellbro has been up since 5 AM, trying to take care of a water issue.
The temperature has been between -15 to -20 degrees Celsius the last few days.
"Now we have gotten the water going again here in the village after two days without it. I had to go and get water for the horses at the community center, but now I don't have to anymore" says Stefan Dellbro.
Don Viking races well in the summer, but the cold part of the year is better for your horse you have said. Could the winter weather with corks in the shoes be the factor that helps you win on New Year's Day – Grisle Odin G.L. has beaten Don Viking lately?
"Yes, he is good. We gave him a fight in the last start when my horse was parked outside with Øystein Tjomsland's horse right on my horse's back. I would like to see the trips reversed for this start. Don Viking is best with a trip and he really shouldn't be raced in the lead and definitely not first up".
You work for Travtjänsten as a handicapper. So how do you handicap this race?
"I guess I have to rank Grisle Odin first since he has beaten my horse twice in a row. But Don Viking is one of two horses who can win, I think. I think he is at least as good as 9 Björs Frej. Don Viking has beaten 6 Philip Ess trotting outside of him and over the middle distance he will beat him any day of the week".
Your thoughts on the draw?
"It will be interesting now that Grisle Odin drew post one since he can't leave. That's the horse to beat so as far as I'm concerned he can stay there on the inside. If not, I guess driver Ulf Ohlsson has to take a slow start and get away last to get a free path".
Three suspensory injuries have stopped Don Viking earlier in his career but you have given this horse, who now is 13 years old new life. Were you never worried?
"I was, for the first ten starts. But it's amazing that he could hold up and be so good at his age. He has progressed and gotten better each year. He is Mister Consistency himself and he is feeling good and should have a couple of more seasons ahead of him with similar results".
What do the days leading up to Saturday look like for him?
"He has trained every other day or every third day up the hill here in the village after his last start. I guess he will go Tuesday and Thursday this week. The Viking has a training buddy that he always trains together with who also races on V75 on Saturday, in the other coldblood race. That's 4 Rote Lin (V75-4) who is trained by my girlfriend Josefin Olofsson and Mats E Djuse drives that one too. She's a very capable mare who is in great form and has come up with a couple of really good efforts lately. Djuse thinks the mare has been very good and physically she is equal to The Viking in training. The inconsistency comes from in between her ears. Rote Lin has a strong will and makes breaks easily" says Stefan Dellbro.
Maybe the little village of Långed can take a double on V75?