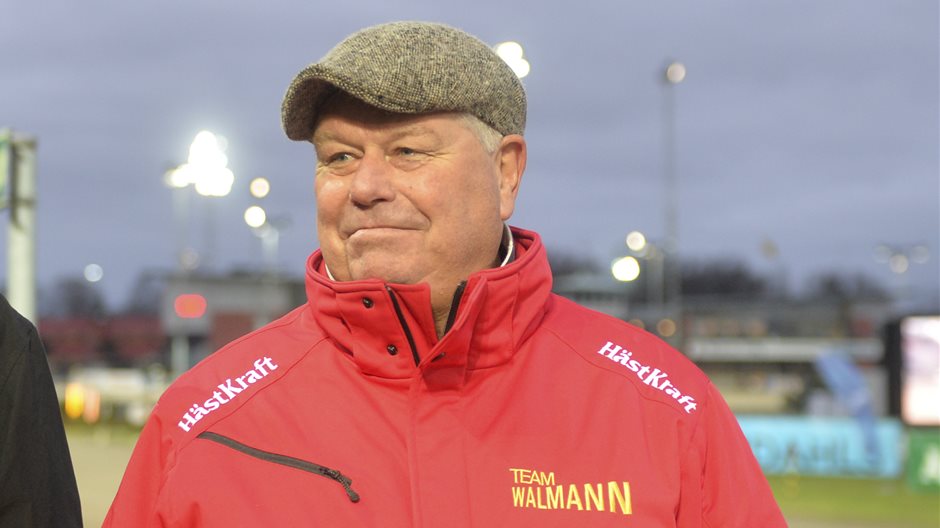 He has won eight E3 finals as a trainer.
Now Roger Walmann has two chances to win the filly division and add another stakes win to his resume.
"I have two fillies who both should have a chance to win" says Walmann.

The Solvalla trainer was very successful when the eliminations to the first real battle  for the three year olds, the E3 finals,  were held. The 'filly specialist' Walmann took a double in the eliminations when both Flash Am and Aleppo Pine won convincingly. He also had Concrete Dee who made it to final for the colts and geldings after finishing third in his elimination. The finals are being held this Saturday at Färjestad with SEK 925,000 for the winner in each division.
"It's fun and I have two fillies with all possibilities to win. I think they're equal and the one who has the best form on Saturday has the best chance. If it's enough to win remains to see but I have to assume they will be right there battling for the win. I'm going to the races Saturday with a good feeling" says Roger Walmann.

"Two different types of horses"
In the filly final he has Flash Am who has three wins and one second in four starts and also Aleppo Pine who has won four out of five starts. They both their eliminations very easily.
"It's not easy to put one before the other this early in the season. They're two different types of horses. Aleppo Pine is the stronger one while little Flash Am is the one with more speed. This early in the year it's hard to say who will be the better one" says Walmann.
Flash Am is very quick out of the gate and drew the perfect post one with Örjan Kihlström who also won the elimination with her. Aleppo Pine will start from post three with her regular driver Kenneth Haugstad.

"She's just a fast filly"
"Flash Am (V75®-2) is a filly with a lot of speed and a light fluid gait who is easy to get in position with her gate speed. She's just a fast filly. She's raced really well and I think she was very good in the elimination, being able to speed away like that on that sloppy track. I was very happy to be able to get post one which is perfect for her. It would take a lot for someone to take a length on her out of the gate. She's undefeated from the front and if someone would out leave her, she will have to sit in the pocket and hope to get out in the end".

"Is tougher and can handle a tougher trip"
"Aleppo Pine (V75-2) is a strong filly who is a little tougher and can handle a tougher trip and do more herself in the race. She's won all the races she could have won. She's the one has been the better one of my two so far, but three year olds develop so fast and differently this time of the year. Therefor I can honestly say that I can't tell you who's the better one right now. She got a good trip in her elimination and wasn't empty at all. She's quick out of the gate, just not as quick as Flash. But she's got a good post and will be in a good position right away".

Any shoeing or equipment changes on either of them?
"I haven't decided that yet, this early in the week. I want to train them first and see how they feel before I make up my mind. I'm sure both could race barefoot, I just want to see how they feel and how the track will be before I decide anything. Aleppo Pine raced in an American sulky last week and will do so again, but I don't think Flash will. Both are racing with pullouts" Walmann says.

Your thoughts on Concrete Dee who drew post twelve in the colt division?
"Concrete Dee (V75-7) raced well in the elimination and did what he could. He's a big heavy horses who was at a disadvantage on that sloppy track. It's a longshot for him to have a chance from post twelve. He's just getting started and if he can get third or fourth, then he's done really well".

"Very good form - could battle for the win"
Färjestad is also hosting the V75 finals this Saturday and Roger Walmann has five more horses qualified for those finals. Here are his comments.
"King City (V75-1) was very good finishing second in the elimination and final in Oslo. He's in tougher here in the silver division and 2,100 meters is not an advantage. He has to hope to make some money from post eight".
"Pythagoras Face (V75-3) was ok in his first start back but needs more starts since he hasn't been trained all that much".
"Gravity Falls (V75-5) was an ok fourth in Olso but doesn't like to win that often and from a trailing position we have to hope for a nice trip and to make some money".
"Dom Perignon (V75-5) in in good form and turned the field inside out form a trailing position over 1,600 meters in his last start. He's a capable horse in a relatively low class but it's not easy winning a V75 final from post eleven. With some racing luck he could be right there in the photo".
"Urban Kronos (V76-6) is in very good from and has two straight wins. If he gets a good stalking trip he could battle for the win here too. He won on the front end in his last start but he is usually better with cover" says Roger Walmann.