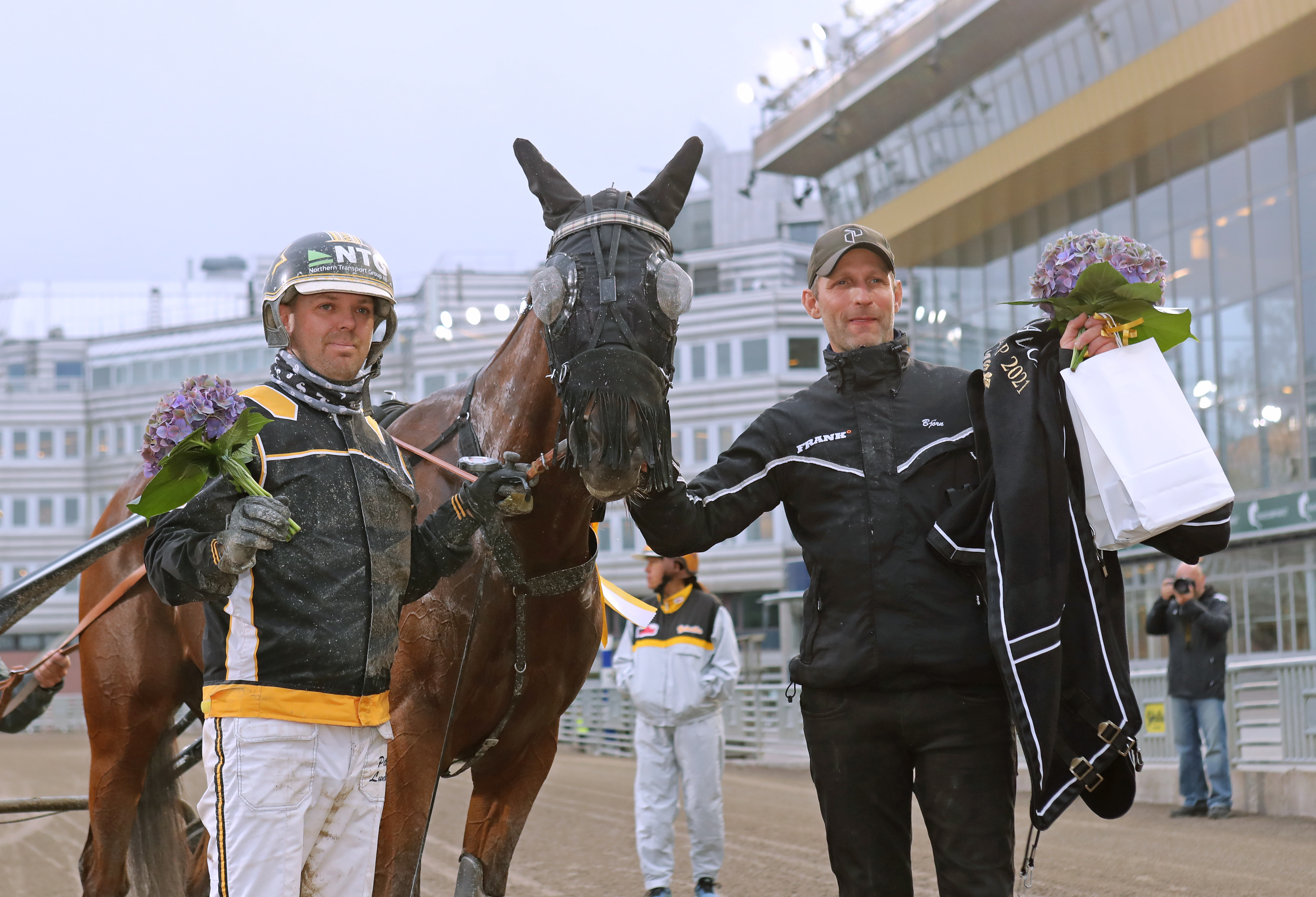 A grinder who has never been tired.
Kashmir River was the upset winner in the Swedish Trotting Oaks eliminations.
Now she is ready to go for the knock-out also in the final.
"She is the best young horse I have trained and I have never felt that I have such a good chance in a big race like this before" says trainer Björn Röcklinger.

V75® this Saturday is not just any race card.
Besides the finals in the regular classes, the card also includes the biggest races for three-year-olds in the country, The Swedish Trotting Kriterium and The Swedish Trotting Oaks, with millions and eternal glory for the winners.
Someone who is extra anxious is Björn Röcklinger.
The Gotland born, Solvalla licensed trainer has been a professional trainer for 20 years and is facing the biggest race of his career.
"That's right. We have been in stakes finals before but we have never been able to finish top three in any of the bigger races. This is the first time I really feel that I have a horse who has a chance to win this type of race, so it's obviously huge" says the 46-year old trainer.
The filly he is talking about is Kashmir River.
She is a French bred filly who has bulldozed her way around the racetracks. She won her first career start in June in 1:15.2 over the middle distance despite being parked out and has just continued on that same path.
In her Oaks elimination, she ended up parked outside the favorite 10 Glamorous Rain at a furious pace. But despite the fastest opening kilometer time of the entire night, 1:11, she did what she usually does and just forced her way to victory.
"I thought the pace was way too tough and that she would have problems coming home. But it was even tougher for her opponents, it was a heck of an effort. It's hard to describe my feelings when I saw that she won. We have always invested in younger horses and this is the type of horse you dream of having" says Röcklinger, who bought the filly at a yearling sale for SEK 70,000.
What did you like about Kashmir River?
"I saw her video before the sale and I really liked the way she moved. I also really like the sire Django Riff. He won pretty much everything in France at age two and three and he was a very tough horse who usually did all the work himself. So when she was in the right price range we bought her, even if she looked like a pretty average bay filly when we looked at her at the sale".

"A little bit faster and a little bit stronger than the others"
It would soon be clear that Kashmir River was no average filly.
"I noticed her talent as soon as she was hooked to the cart. She pulled the cart so easily, she just sped up when asked to and she was naturally strong. She was a little bit stronger and a little bit faster than the other horses. Then she has had other issues, but physically she has always been ahead of her stablemates in that age group".
Her issues have been seen on two different occasions on the racetracks.
The first time was at Bollnäs in August when she made a break the first time she was behind the gate.
The second time was in the following start when Kashmir River started from the second tier and trotted behind the field and looked so bad, that she was put on the steward's list.
"She doesn't like having horses in front of her, she's always been like that. Sure, she doesn't like the gravel in her face, thats' why she races with a mask, but I think it's mostly her temper. We practice all the time and she has gotten better. In her last start, she accepted trotting behind another horse around the first turn, even if you could tell she didn't like it. She is tough mentally and just wants to go forward so she has gotten some tough trips. I also understand that she is not that much fun having on the outside since she just wants to battle when she is there".

Feels even better in training — pulling the shoes
The tough trips, to get to grind outside the leader is something Kashmir River seems to love.
Besides those two mishaps, she is undefeated which means she has never let another horse pass her in a race.
The question is if she can keep that streak alive on Saturday when the twelve best three-year-old fillies line up behind the gate.
Since Röcklinger got to pick his post position last of all the elimination winners, she will start from post six.
"It was a bummer to pick that ball of course, so I'm banned from all future draws. But it doesn't make that much of a difference for us. Had I gotten to pick first, I would have picked post four. She likes when she gets to start towards the middle of the track".
Then it will probably be full speed ahead as usual.
"She left the gate much better in her last start and for this start I will pull her shoes behind for the very first time. I expect her to be a bit more clean gaited that way. It should also make her leave a bit faster. Of course, we will teach her to race behind horses too, but this might not be the race to practice doing that...But that's not my problem, my job is to have her ready for Saturday. Petter (Lundeberg) will do his job with the tactical choices".
How do you think he will race her?
"He thinks she is unbeatable so I guess he will drive accordingly..."
How does she feel in training?
"Better than she did before the elimination. She trots straighter and she's more harmonious. It feels like she is more relaxed and got rid of some extra energy when she got to get tired, for a change. She has never been tired in training or in a race before, so that was something new for her which seems to be a positive thing. We keep the same training schedule as we did the week of the elimination with training on Tuesday and some intervals the day before the race".
What are your feelings going into the final?
"It's just fun, this is what we train for and dream about. I know how hard it is to get a horse that's good enough for these races. But now I believe I do, so I really look forward to the race" says Björn Röcklinger.