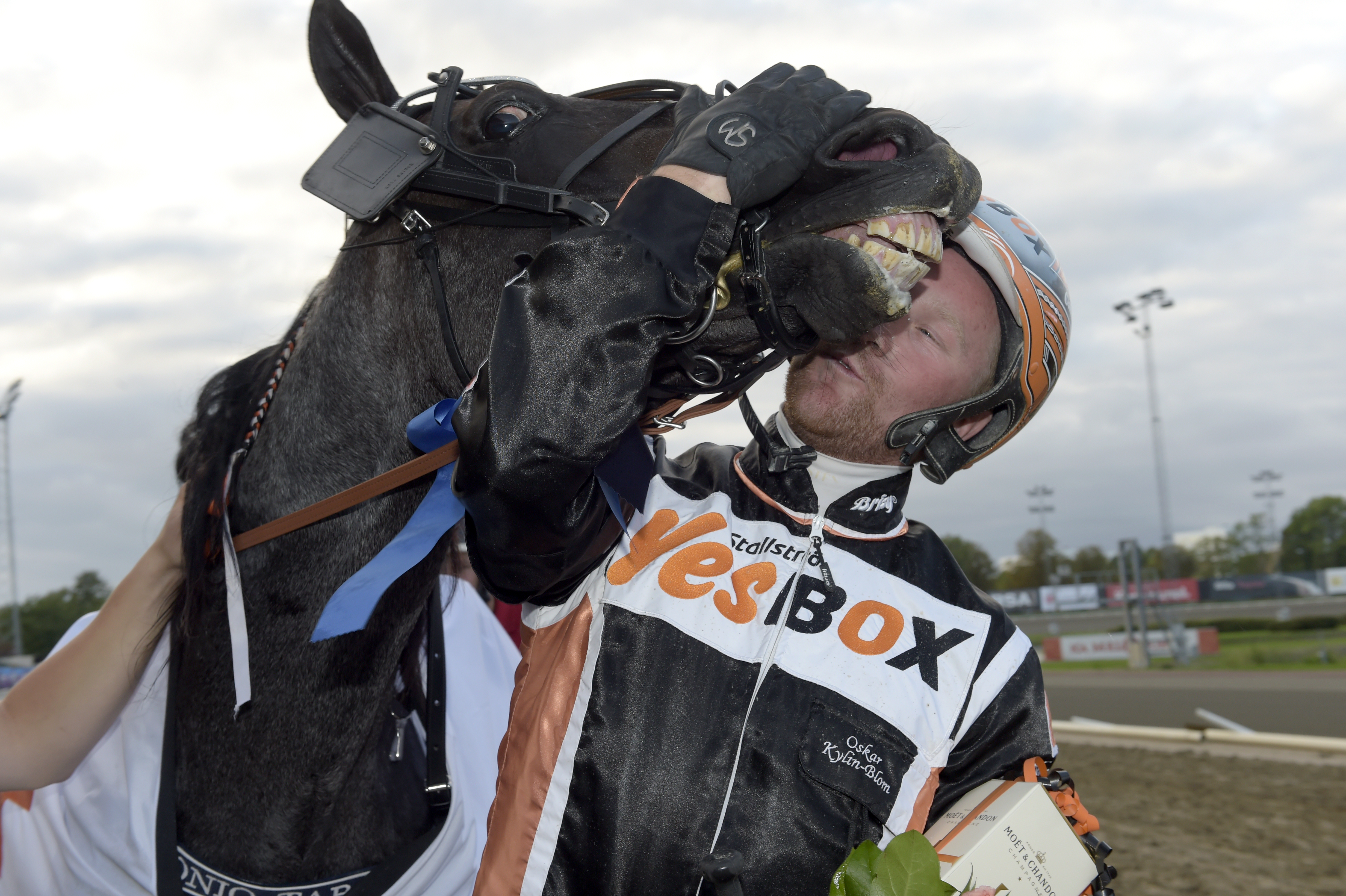 V75® Saturday: Chasing three in a row in silver with his V75 star

On Saturday he's back on the track with his horse again.
Oskar Kylin-Blom got a V75® star right away in his first year training and he's chasing his third win in a row in the silver division with Antonio Tabac in V75-5 at Hagmyren.
In the same meet, in less than a month!

After working at Solvalla for other trainers, the talented Oskar Kylin-Blom started up his own stable at Gävle racetrack in the beginning of 2018.
To say that he is off to a great start is no exaggeration.
Oskar trains together with his girlfriend Emilia Leo and the couple didn't even have time to settle in at the farm before their success began.
Last Saturday Emilia won the bronze division on V75® at Solänget with her own prodigy Sign Me Up Too and this Saturday it's time for six year old Antonio Tabac and Oskar in the silver division again.
Oskar is leasing the grey horse from one of Stig H Johansson's owners and he arrived to Oskar's stable in May.  On August 18 they won the silver division at their home track Gävle together and two weeks later they took a new silver victory at Jägersro.
Antonio Tabac has been impressive and thanks to his two wins he's double qualified for the final at Solvalla on September 29.
Now the horse of the summer in the silver division will even make a third start during the same meet.
"Yes, now we're really doing it" Oskar says laughing.
"I decided early that I would race him every two weeks and since his happy attitude keeps him going I see no reason to change what's working".

"It's cool and I'm thankful"
Antonio Tabac has made SEK 650,000 for his new trainer/owner in seven starts including four wins, two seconds and one fourth place finish.
The wins in the highest league of racing, V75, have been achieved the hard way. At Gävle he won for fun from outside the leader and last time at Jägersro he had to come three wide without cover for the last 700 meters.
"He's been fantastic. I could have never imagined this type of development but it's so cool and I'm really thankful. I was just happy to get a horse I could race on V75 on Saturdays and put my name out there".

Moving date not decided yet
Racing him consistently means he only needs light training and and that he gets to spend a lot of time in the field.
Oskar Kylin-Blom och Emilia Leo are moving to a farm in Hedesunda, south of Gävle but they haven't gotten access to it yet.
"But the training possibilities here at the track are great, there's just not enough paddocks to turn them out in but it's been working out great. We got the go ahead to start moving horses out to the farm now, we just haven't decided when to" he says.
This past weekend went to Norway and came home with four new horses from a sale. Meanwhile, Emilia went to Örnsköldsvik with Sign Me Up Too who she trains and they took their third V75 victory since June.
"Emilia is very talented and even if we help each other, we have our own horses that we train. I actually have three horses that she trains for me".

Antonio Tabac has had post eleven at both his wins. Now you drew post three for Saturday which must feel good?
"Yes, finally a good post. He's found such a good form and he's really happy with life and he feels just the way I want him to. But I know how tough it is and I can't expect that he wins three in a row in silver. On the other hand...the conditions look perfect for him to do so. No changes, he'll race barefoot upfront and with his pull down bridle".
Your thoughts on the opponents?
"I have great respect for M.T.Joinville and I was very impressed by Moni Viking at Bergsåker. So there are good horses and anything can happen".
Maracanazo (V75-1) is new in your stable and he finished second in his first start in three months which was the first start for you. Can he win now?
"I was very pleased with him. He crossed the wire at full speed and was happy and healthy after the race. He even crossed the wire with his ears up over the short distance which isn't his best. He raced open and with steel shoes and we took it as a test. Of course I count on him being improved with that race and I will probably pull his front shoes and I might also use pullout earplugs this time. He could win, but if he's second, third or fourth I'll be happy too".