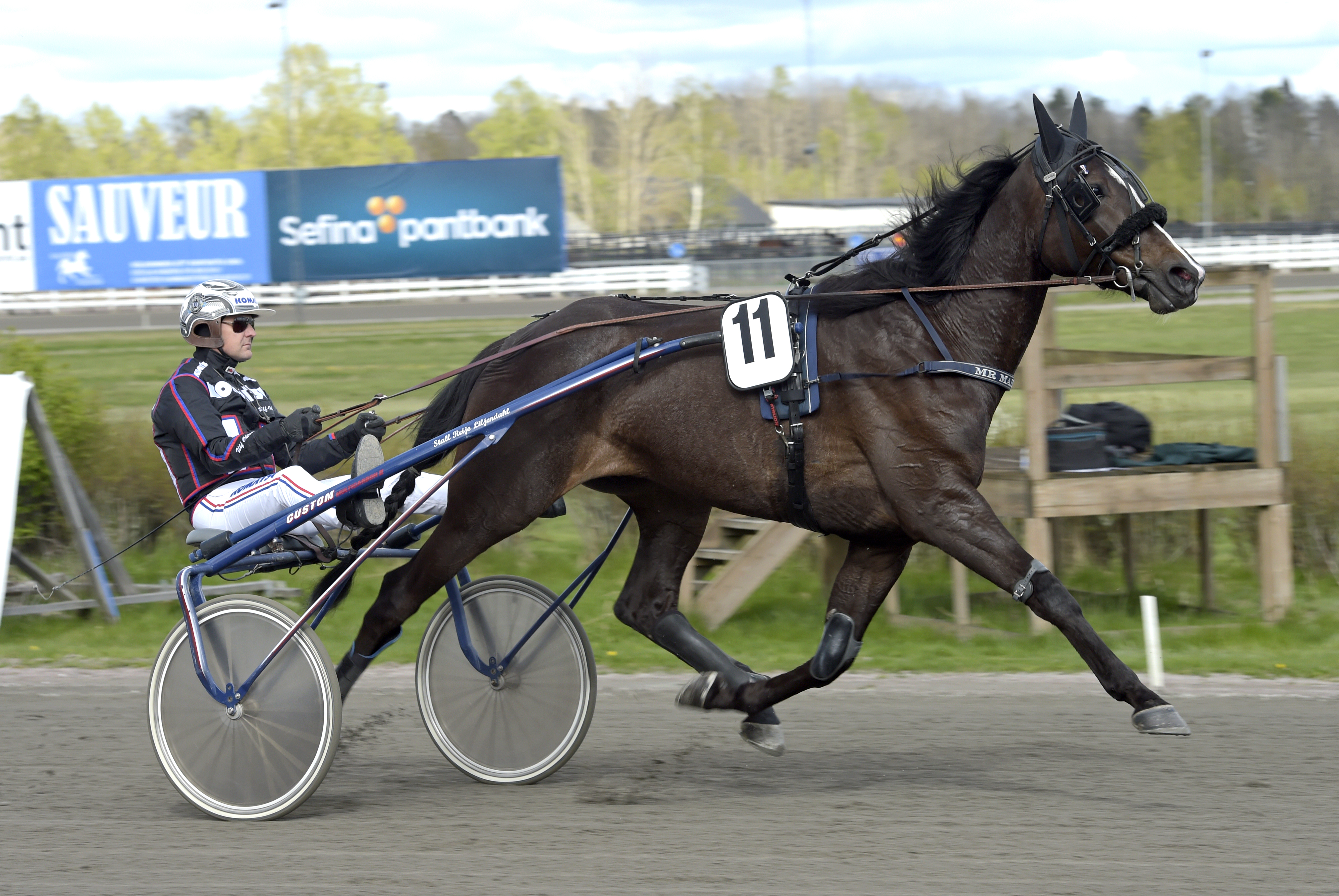 V75® (Saturday): Dramatic warm up - crushed in the race

After a questionable warm up many thought that Mr Marvelous would be in trouble in his last start.
But the favorite pulled himself together and crushed his opponents on V75®.
After all that it's now time for the STL finals this Elitlopp weekend.
"He won without being tired and he's a good horse under development" says Reijo Liljendahl.

Mr Marvelous' warm up received a lot of attention in media and in the TV broadcast at Mantorp two weekends ago. He was the favorite on V75® together with Ulf Ohlsson but his demeanor left a lot more to be desired. Trainer Reijo Liljendahl had been out with the horse in a first warm up trip and then Mr Marvelous looked good behind the gate and left according to Reijo 'like hell without me even asking him'. Just before the start of the race the track veterinarian took a closer look at the horse and after having talked with driver Ulf Ohlsson he allowed the horse to race. And once in the race there was definitely nothing wrong with the effort. Mr Marvelous crushed his opponents and won easily without being tired.
"4 Mr Marvelous (V75-2) has always warmed up badly and he's not motivated to trot when he's by himself. He drags his legs but once it's time to race and he's in a field he's a completely different horse. He relaxed and made a break when Ulf warmed him up" says Reijo Liljendahl.
"I didn't see it myself since I was in the barn preparing another horse. Of course there will be questions when a big favorite makes a break in the warm up and this time it became very dramatic. I became a bit insecure myself and changed his front shoes. He was good in the race and won easily".

"Had taken some weight off of him"
Is there any reason or explanation to why the horse acted the way he did?
"It could be the because we had taken some weight off of him for that start. We shoed him with aluminum shoes and pads upfront but after the warm up I switched back to steel shoes which he has raced with before. We talked about scratching him if he felt bad scoring down. When I jogged him on the back stretch before going out to the post parade he felt OK".
"There was a lot of focus on that and Ulf was happy with the horse and said that he was very good in the race. He has also felt good in training after that and there's nothing wrong with him. I trained him in the end of last week and he was good. He will also train once more on Tuesday this week".

"Has plenty of ability"
Four year old Mr Marvelous has three wins, two seconds and two thirds in eight starts. Before winning on V75 in Mantorp he had trotted a very good last kilometer to finish third on V75 in Örebro from post position eleven.
"He has plenty of ability and he's a good horse under development. First and foremost he's very strong, but he can be a bit lazy and unfocused. He has gotten more and more bounce to his stride and he's starting to handle his big body. His form indicator is definitely pointing upwards" says Reijo.

"Has to race better - but is not chanceless"
The Elitlopp weekend is upon us and in the second leg of V75 on Saturday, Mr Marvelous will start from post four behind the gate in the Klass II STL final. He will once again be driven by Ulf Ohlsson and Reijo Liljendahl doesn't feel chanceless despite the tough competition.
"It's a good post position and good conditions for the horse. He's in against some tough opponents and it gets tougher and tougher with every start. These are the best horses who have raced in this class during the winter and spring. He has to race even better than in his last start to win this but I don't think he's chanceless. He's a strong horse with a good attitude who wants to be first".
"We won't change the shoeing, he will race with steel shoes like he did in his last start. I had thought about testing him in an American sulky last time in Mantorp but since the preparations went the way they went, we didn't do so. We have to see if he fits in it, we will try it out and if he fits in it he might race in it on Saturday. No other changes".
You also have Han Herred in the third leg and he has finished fourth in his last three starts. What are his chances?
"Han Herred (V75-3) is in good form and was very good at Åby two starts ago when he didn't have to go all out. His last start at Charlottenlund was a bit of a messy race and he didn't like the track with its tight turns. But he raced well anyway and if he gets a nice check we're happy. No changes".

Could be first time American sulky for Reijo's best horse
The Solvalla trainer will also race his star trotter Admiral As in the four year old elite on the Sunday V75. He finished sixth in the King's Trophy in his last start and Reijo has earlier said that he is the best horse he has ever trained. This time Admiral As is in against the undefeated Ecurie D.
"Admiral As (V75-3) had no racing luck neither in the elimination nor the final of the King's Trophy. We have to hope that it pays off later this year. He has all the qualities needed to become a top horse and he feels good in training. But he can't get into traffic trouble like it did during the last kilometer during the final. He finished fastest of them all".
"We might try an American sulky in the warm up this time. We have a good post position and he hasn't had that in a long time. I trained him in 1:21 today (Monday) and I was very pleased with him. No changes, he will race with shoes all around" says Reijo Liljendahl.