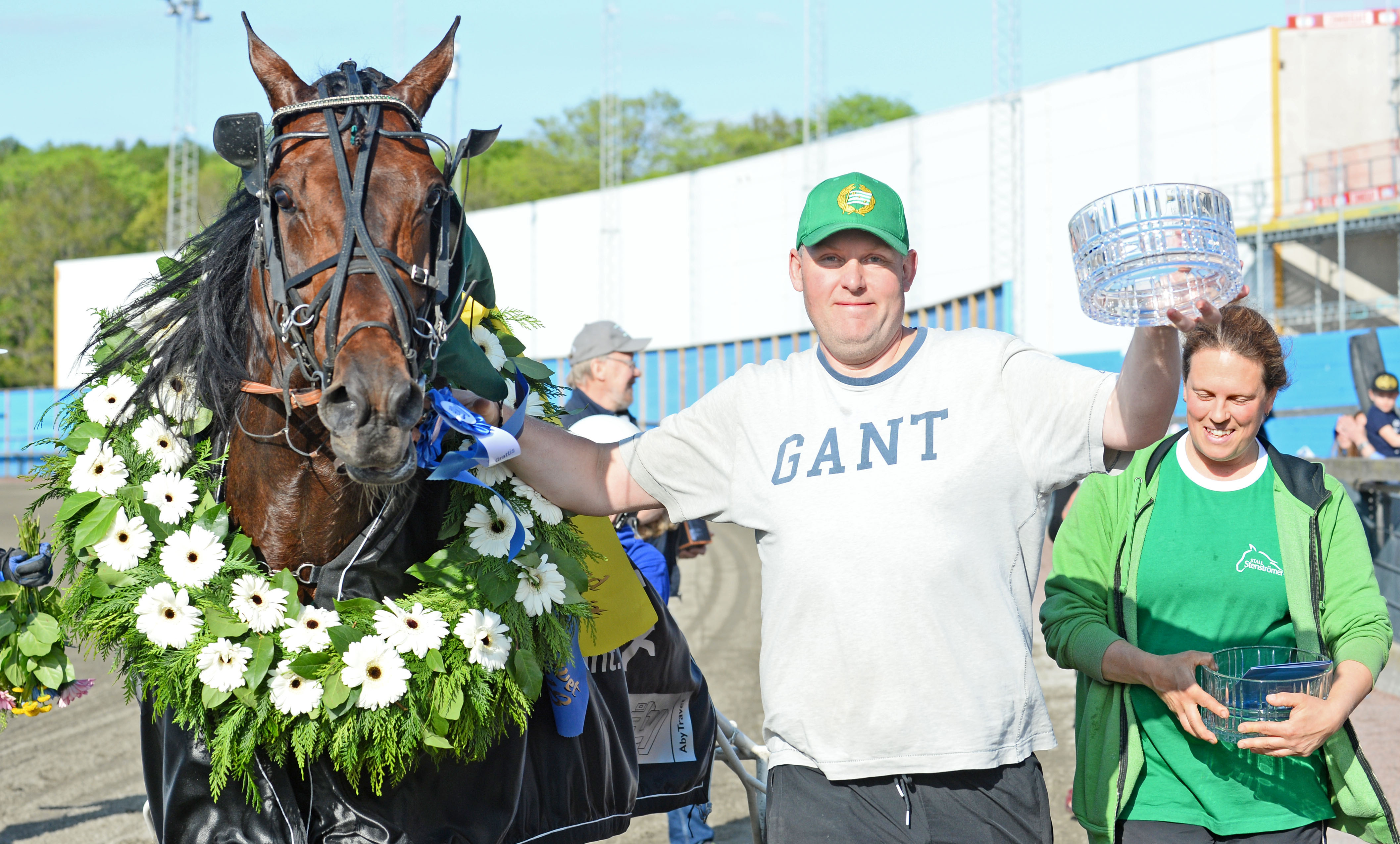 V75® Saturday: Stenströmer: "My horses are in top form"

Ulf Stenströmer is ready for his hometrack's biggest weekend of the year and has entered the best horse of his stable to V75® on Saturday.
But the post position for world record holder Handsome Brad wasn't what he hoped for.
"A big disappointment. Just about every horse I entered drew the worst possible post this weekend. But my horses are in top form" says Ulf Stenströmer.

Axevalla is ready for their biggest weekend of the year with racing three days in a row. The very popular weekend starts Friday and continues with V75® both Saturday and Sunday and culminates with Stochampionatet. For Axevalla trainer Stenströmer it's the highlight of the year.
"It's a very pleasant weekend. You can ask the Solvalla trainer what Elitloppet means for them or the Jägersro trainers what the Derby weekend means for them. It's the same thing for us Axevalla trainers. It's the biggest event of the year" says Ulf Stenströmer.
"We have a tradition and also this year we will have food and drinks for the owners the entire weekend. On Friday we'll bring out the grill, if it's allowed and the other two days my mom is taking care of the food service. We'll serve cold cuts and potato salad and we usually go through a few hundred portions. it's nice to be able to do something for the owners and it's always a great time".

Getting ready with Elfsborg - Hammarby
When we reach Ulf Stenströmer this Monday afternoon he's already started the countdown for the weekend. He is since many years a big fan of Hammarby and is on his way to Borås to watch them play Elfsborg.
"I was supposed to go to Mantorp where we're racing two horses. But my help told me they'll be fine and they wanted me to go watch the game instead. I have owners and friends who always invite me to come down to watch this game every year. So it will be Elfsborg - Hammarby and before that we meet up for dinner at a great restaurant owned by a previous horse owner of mine. And then we're off to watch Hammarby degrade Elfsborg, ha ha. I'm always cocky before the game but afterwards they are the ones making fun of me when Elfsborg has won. But I have a good feeling this year".

"The draw was a big disappointment"
Ulf has 34 horses in his stable and ten of them are racing this Friday, Saturday and Sunday. One of then is the star of the stable Handsome Brad who won five out of eight starts this year and made over SEK 1.4 million. In his last start he raced great and finished second on V75 in a new lifetime best 1:10.5.
"My entire stable and all the horses are in top form. But the draw was a big disappointment. Just about every horse I entered drew the worst possible post. Post twelve with Handsome Brad in the silver division is very tough, that was a huge disappointment to see" says Stenströmer.

"He's been fantastic all year"
"Handsome Brad (V75-6) delivered a heroic effort in his last start. It was fantastic how he never gave up. I was hoping he could get to the lead but Johan said before the race he would race his horse on the front and you just have to accept that. But I'm sure he regretted it after the race, but everyone races their own horse".
"My horse has been in great form for a while now and been fantastic all year. He's no worse than anyone else in this race but post twelve in these classes usually makes it very hard to win".
"We have to hope for a high pace, over pace, for us to have a chance to get in it. I doubt Ulf Ohlsson will send him first up again. You just can't race them like that every race and I hope someone else can set the pace. If they do, then he has a chance. He's soon up in the gold division and I'm sure he'll do fine there too. We'll optimize him, barefoot, American sulky and probably a pull down bridle" says Ulf Stenströmer.

You have two more horses on V75 on Saturday. What are their chances?
"Brilliance (V75-2) was charging hard across the wire in her last start and if she gets out five meters sooner, she's second. If she gets out 50 meters sooner I think she wins it. She was just flying and the driver said the same thing. She's in tougher here against stallions and geldings and a big reason we're racing is because it's here at home and there weren't that many other options for her. She's in good form but post four in volt start is not good for her. I think she'll be ok, she's gotten smarter as she's gotten older. She needs a lot of luck to win but she could end up top three".
"Quite Wish (V75-5) has gotten toughness from racing in V75 and he's been good every time and makes good money. In his last start he was only 1/10 of a second from being top three. Now he's up in class but there weren't any races for him so we'll race him here and hopefully he can grow in to this class. It's a shame with the post position in the second tier since he can leave so well and I would liked to see him in the lead. He's not the same behind horses and I would be both happy and surprised if he would win. We hope for some money. I have a bigger version of the American sulky arriving on Saturday and he'll probably race in that one".