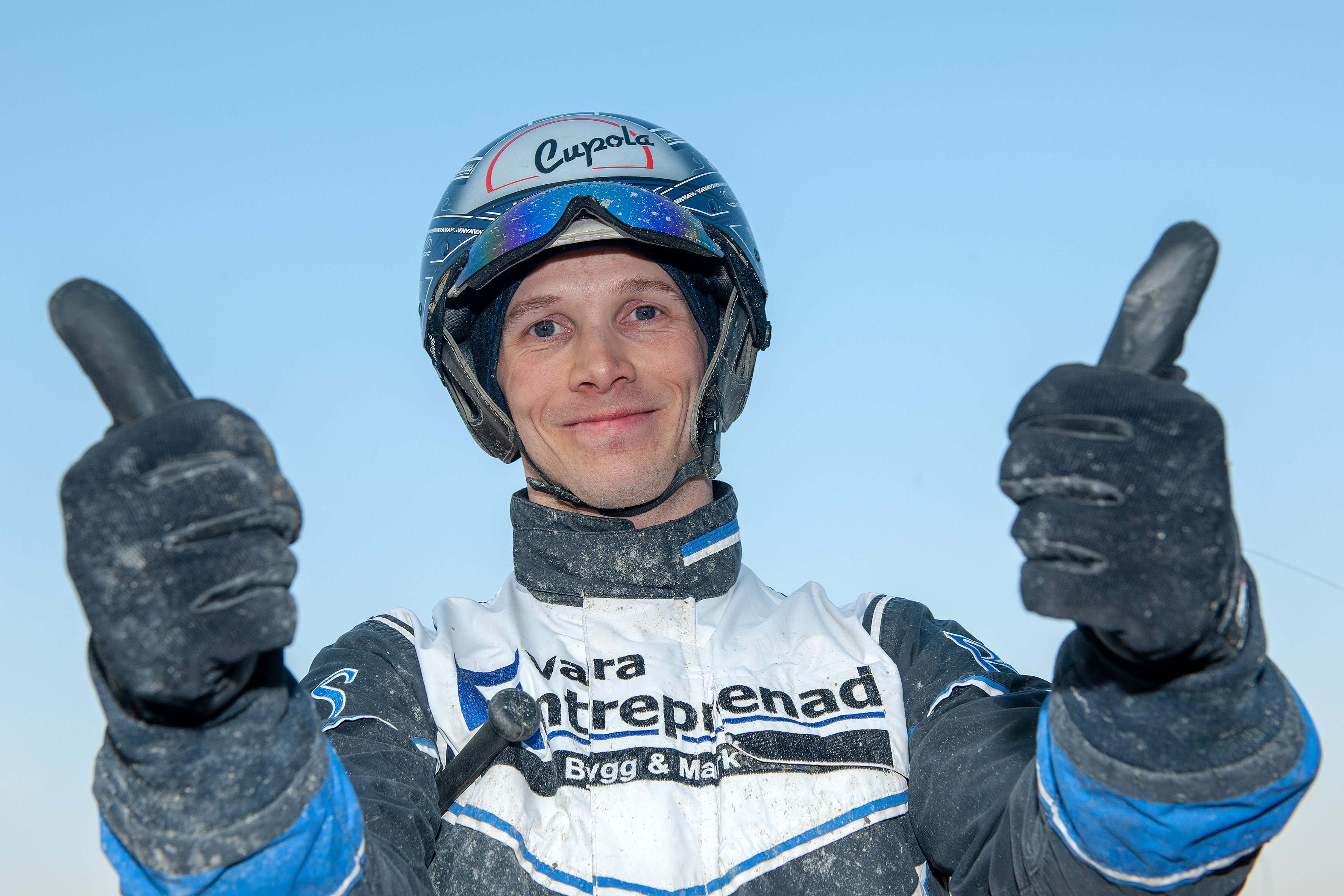 V75® (Saturday): Svanstedt's Baron going for Gold at his hometrack

He has become a long-running series on V75® and on Saturday he will make his 14th consecutive V75 start.
Baron Gift has trotted the entire way up to the Gold division and he is a big hometown hope for the Saturday card during Trippeltravet.
"He's never felt as good and sound as he does right now" says Rickard Svanstedt.

The time has come for the big trot fest at Axevalla with its traditional Stochampionat meet. With three consecutive days of racing, count on a lot of people surrounding the racetrack as the camping ground along the backstretch has been booked full for a long time.
On the Saturday V75® card, Baron Gift is one of the hometown hopes. Trainer Rickard Svanstedt has sharpened up his star a bit extra to hopefully get to win in front of the hometown crowd.
"That would be a lot of fun. He feels great and we've been aiming for this race for some time now. We initially planned for Jarlsberg Grand Prix and after that Årjängs Stora Sprinterlopp. But he never got invited to Jarlsberg and he didn't draw in at Årjäng" says Rickard Svanstedt.
"Then we decided to race him at Axevalla instead so the horse got some extra training in between. He's been trained a lot the entire time but I've also trained him on the track at just under 1:20".
Is that the track record at Bjertorp, since you're usually training on and are not known for going fast trips there?
"Haha, no my dad (Åke Svanstedt) has the track record with Tag The Devil. I think he trained him in 1:11 before he won a big race in Norway. But we've sharpened him up a bit extra now since he hasn't raced for a little while".

Can finally train in between starts
Baron Gift has won four times on V75 for Rickard Svanstedt, who has taken the horse all the way up to the Gold division. The six year old stallion has made SEK 2 million even though he's never been able to train consistently.
"He used to get sore and stiff as soon as we tried to increase the training. We had to go nice and slow with him and let the races make him better. Now he's become sounder and I don't know what has made him being able to tolerate training much better now. We've been able to push him a bit lately and he has responded well to that. So it feels a lot better now when I'm able to train him in between starts" says Rickard Svanstedt.

"Has shown that he's good enough for Gold"
Baron Gift has gotten a taste of the elite in his last starts. He was second at Åby behind Bahia Quesnot after an impressive sprint down the stretch. In the following start he finished fifth in 'The road to Elitloppet', a race won by Sorbet which got him a ticket to Elitloppet. And in his last start he once again came up with a fantastic finish during the midsummer weekend. Baron Gift was flying down the stretch and wasn't far from getting up to win.
"He was very good at Kalmar. I was sitting among the last horses turning for home and still finished third. He was only beat a half a length for the win. My horse hasn't made that many starts in the Gold division but he has shown that he's good enough".
"I don't want to blame bad post positions but he's had extremely bad luck with the draw and has often started from bad posts. The few times he's had good post positions, he's also done very well".

"Can win with some racing luck"
Unfortunately the draw didn't go much better this time for Baron Gift. He drew post seven behind the gate in this Saturday's Gold division, V75-6. The distance is 2,640 meters and the question is if Baron Gift's ability to finish can take him all the way to victory down Axevalla's long home stretch.
"It might not be his favorite distance but I'm sure it be just fine. He needs a good trip and doesn't want to do too much work himself. If he just gets some good cover he can finish well. The long stretch at Axevalla is an advantage and I think he should have a chance to win with some racing luck".
"I would say he's in top form and I've never felt him as good and sound as he is right now. He will race barefoot as usual, with a blind bridle and in an American sulky" says Rickard Svanstedt.

You have one more horse racing on V75, Anne Royal in the second leg. What do you think about her chances?
"Anne Royal (V75-2) has made two starts for me and the first time she took a new lifetime mark, 1:12.7 and in her last start she was locked in. First of all we have to try to get away trotting from post four and it's a little hard for me to say how she will do in this race".
"She's been hard to handle before but has gotten better and been fine lately, but I think winning will be tough. I want to her see behave 100% again. We've saved her feet and will race her barefoot all around this time" says Svanstedt who runs a 40 horse stable where 15 are racehorses and more than half of the stable's stalls are occupied by younger horses.