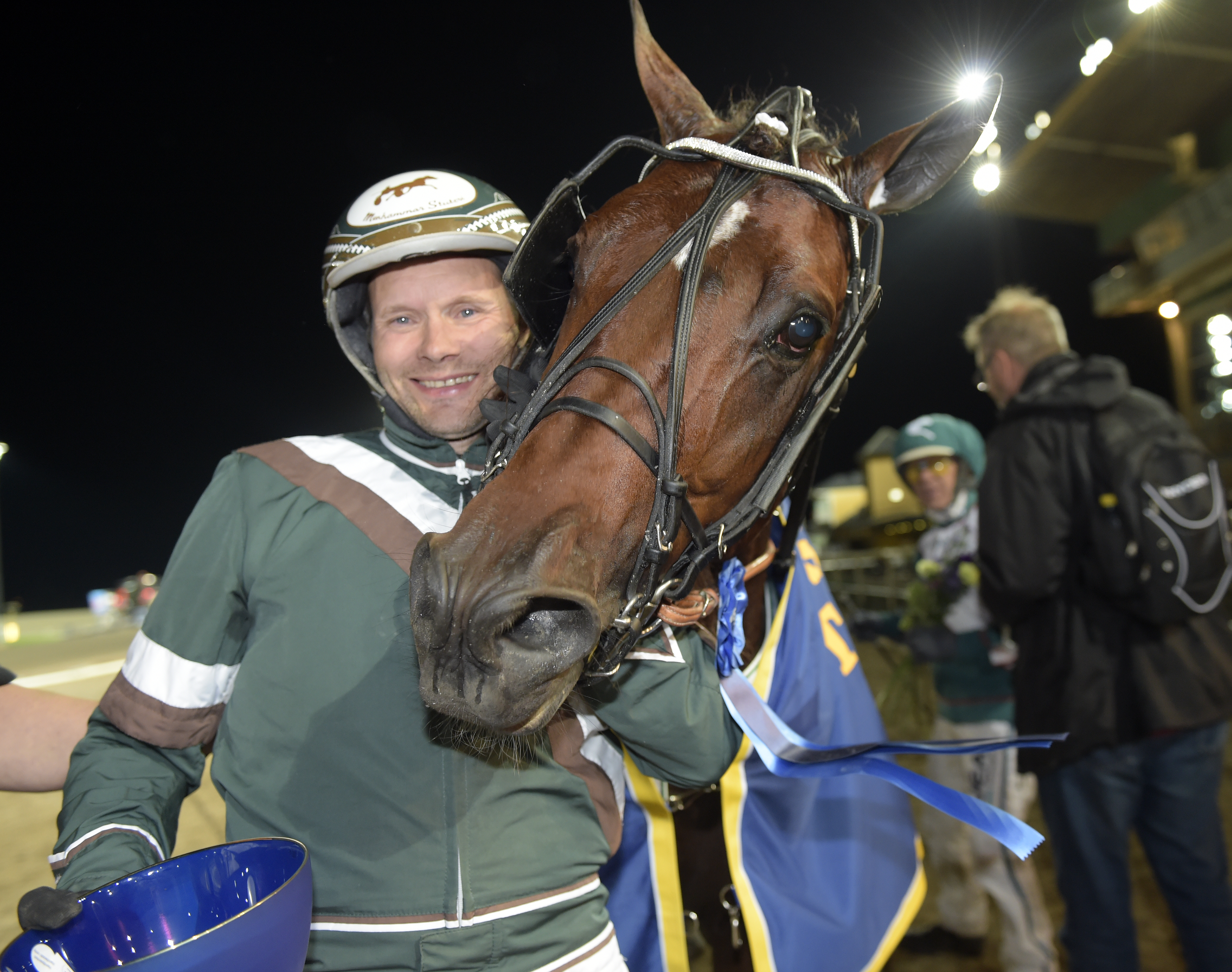 He was in a league of his own in the Swedish Trotting Derby and set a new world record.
Now Who's Who is chasing a new stakes victory when he on Saturday races in an elimination to Grand Prix de l'UET.
"He actually feels even better than what he did before the Derby. He's great and he just bounces around" says trainer Pasi Aikio and recommends leaving his horse singled out on the V75® ticket.

It's been three years since Pasi Aikio took over as trainer for Travkompaniet's horses when Stefan Hultman got sick. On the farm Yttersta on Ekerö, not very far from Menhammar Stuteri he has his stable and he has other owners too, not only Travkompaniet. Everyone is welcome, as Pasi himself says. He will never forget the first weekend in September when Who's Who won the Swedish Trotting Derby in impressive fashion. The four year old stud horse won the prestigious classic in a new world record time of 1:12.0/2,640 meters. Pasi Aikio had done a tremendous job and had his horse in top form when he needed it the most.
"It was very overwhelming and a lot of emotions involved. We got a lot of attention since he was the big favorite and it was fantastic to be able to win it. It's by far the biggest thing that I've ever experienced on a racetrack. Nothing comes close" says Pasi Aikio.
"To win the Derby the way he did it was incredible. Örjan just hand drove him the last 200 meters. My horse wasn't tired, and Örjan just took him home safely".

"He's sharper at home - just bounces around"
How did you celebrate?
"We got together, the entire stable with owners and staff, Margareta bought us all dinner and it was a great time. But we're so caught up in the season, we really should stop and celebrate these big wins more than what we do, so we'll have to do that in the future. Lot of people have congratulated me and I'm still enjoying this victory".
How is Who's Who doing after the Derby win?
"He got an easy week after the race but then it was right back to normal again. Everything is well with him and he feels great. He feels even better now than before the Derby".
"He's sharper here at home and more alert. Usually he sleeps his way through the training but now he just bounces around in a good way".
"Knew he was an extraordinary horse"
Who's Who has won nine out of 15 starts and made almost SEK 5 million. He started racing just about a year ago and got off to a great start with two straight wins. In his third start he was sick and in the following start he made a break. But after that it's pretty much been smooth sailing and last winter he won race after race and was very impressive on V75®.
"He was very green in the beginning and got scared in tight situations. He was interfering a bit but since we found the right shoeing for him it hasn't been a problem".
"He won in 1:14.9 in his second start and then I knew he was an extraordinary horse. But I can't say I saw him as a future Derby winner already then. It wasn't until he won the Class II final with Torbjörn Jansson in 1:12.3 this past spring that I felt we really had the chance" says Pasi Aikio.
"He's such a great individual and there's so much feelings involved with him. In the spring he was pretty study but now he has calmed down and he's a pretty sweet stud horse".
Leaves his horse singled out on V75
On Saturday it's time to race again for Who's Who, this time in a Grand Prix de l'UET elimination. If he makes the final, a new adventure awaits him since the final is being held at Vincennes, Paris on October 12. Who's Who will be the big favorite in V75-2 from post four behind the gate with Örjan Kihlström in the bike. Pasi Aikio is optimistic and he leaves his horse singled out on his V75 ticket in the 'V75 expert picks'.
"Yes I do, since my horse feels great training. His form should be at least as good as it was in the Derby. That should give him a good chance to win this. No equipment or shoeing changes from his last start".
Has an interesting filly in the Oaks
Pasi Aikio has an exciting weekend ahead of him and he doesn't just have Who's Who racing. On Sunday Adorable Lady is racing in the Oaks after finishing second in her elimination. She will start from post eleven, in the second tier and Pasi Aikio will drive her himself in the hunt for the SEK 1.4 million first prize.
"Adorable Lady (V75-4) raced well from a bad post position in her elimination. She sat in the back of the field and they kept a high pace upfront. The filly who won was very good. My filly wasn't tired, I just focused on driving her safely since she had made a break finishing in the start prior. So I didn't want to take any chances".
"It's a very good Oaks and there is not one bad horse in this field. It won't be easy to go around them from this post position. I think she will race well, she's a tough girl with the strength and the will to win as her best features. Now is not the time for changes so she will race the same way she has lately" says Pasi Aikio.