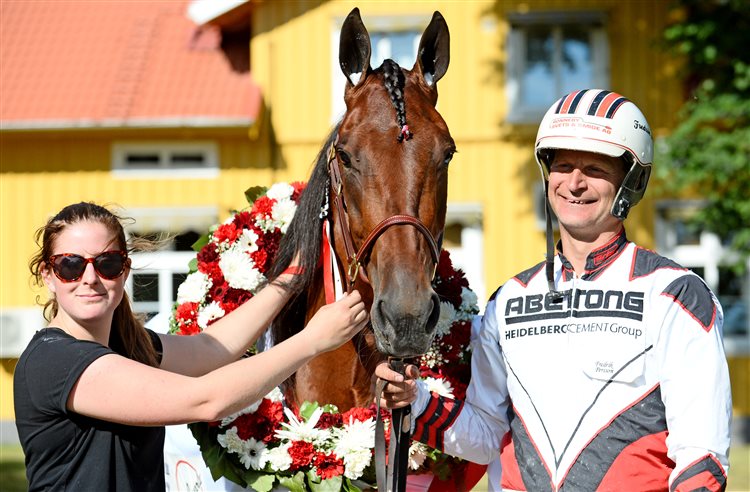 It doesn't look much like springtime going in to the month of March.
Fredrik Persson was surprised by snow at home in Kalmar but sticks to his plan of making the yesteryears Stochampionat's championess' Ultra Bright's 2018 racing debut on V75® at Halmstad this Saturday.
"She feels great and I can't wait to start racing her".

It's been snowing heavily in Kalmar the past few days and the amount of snow causes problems for horsemen with their own farms to maintain. Ultra Bright is not suffering at all. Fredrik Persson tells us that he has had plenty of time to get her ready, when last year's winner of Stochampionatet now is back in the program again.
"We might have some issues this week with all the snow but she has a lot of training sessions in her body and we're going to Halmstad where they always present a great track" says Kalmar trainer Persson.
This interview is being held on Monday afternoon and during the night there has been more snow in Kalmar. The farm has a riding arena that's been kept in good shape the entire time. The trails are in worse shape.
"We have some problems with the trail in the forest, but we've just tried to pack the snow and jog them on top of it. You have to be a little careful. We haven't gotten this much snow in a few years. I think it's been 6-7 years since we had this much snow in Kalmar" says Fredrik Persson.

World record last summer
Fredrik Persson won Stochampionatet at Axevalla last summer where nobody had a chance against Ultra Bright's tough finish. The winning time of 1:13.0 over the 2,640 meters was a new world record for four year old mares on a 1000 meter track.
Going in to the Breeders Crown final in Eskilstuna last November, bad luck struck. Ultra Bright suffered from an abscess and had to be scratched. A few days later she was fine.
"She was in very good form when she got that abscess and after that we made a decision to start off the next season early. I've trained her at Kalmar in 1:20 twice and she feels great.

"Important that she feels good"
On Saturday Ultra Bright makes her 2018 debut in Stoeliten (V75®-5). In her first start against older and more experienced mares she drew a terrible post eight behind the gate over 1,640 meters.
And she has to do it against good mares like Robert Bergh's Geisha Sund, Per Nordström's Dixi Sisu, Jerry Riordan's Treasure Kronos to name a few. It's a strong field.
"I really want to get her and her season started now. The most important thing is that she trots home fast and feels good finishing. So I think we'll take an easy start and go for a strong finish".
Not an easy task for Ultra Bright in her first start of the year against older mares. But Fredrik Persson hasn't given up.
"I think she should count as a surprise bid. If they go too fast on the front end and she gets the right trip, she has a really strong finish. She has great technique and she can switch gears in two strides".

"Easier than Monark"
Fredrik Persson had a very successful 2017. Monark Newmen is another one of his horses who had a good year and he finished second in the Swedish Travderby.
Compared to Monark Newmen he thinks the five year old campaign looks much brighter for Ultra Bright.
"I'm hoping to race her in some races for five year old mares and I also think she can grow into Stoeliten. It's a little easier for her to grow into the class since she's a mare, than it was for Monark".
If everything goes well Saturday, her next race could be Folke Hjalmarssons Minneslopp at Färjestad on Good Friday. That's a race open for five year old mares.
Toughest opponent on Saturday?
"I have the most respect for Riordan's mare Treasure Kronos. She's tough and she's been racing in France during the winter".
You also have the quick leaver Britt Palema in the same race, to be driven by Stefan Söderkvist. Who will take the lead, Britt or Dixi Sisu?
"Britt is very quick behind the gate, especially barefoot as i hope I can race her on Saturday. She doesn't accelerate the same way with shoes. I think she has a good chance of getting to the lead. She could be third, fourth maybe".
The barefoot ban ends in Sweden on March 1st. Do you plan on racing Ultra Bright barefoot too?
"She's got plenty of foot saved up so that's the plan. They do a great job with the track at Halmstad so I'm sure the track will be terrific" says Fredrik Persson.

Editor's note: Jörgen Johansson på Halmstad is optimistic and thinks they will be able to offer a track suitable for barefoot racing on Saturday.