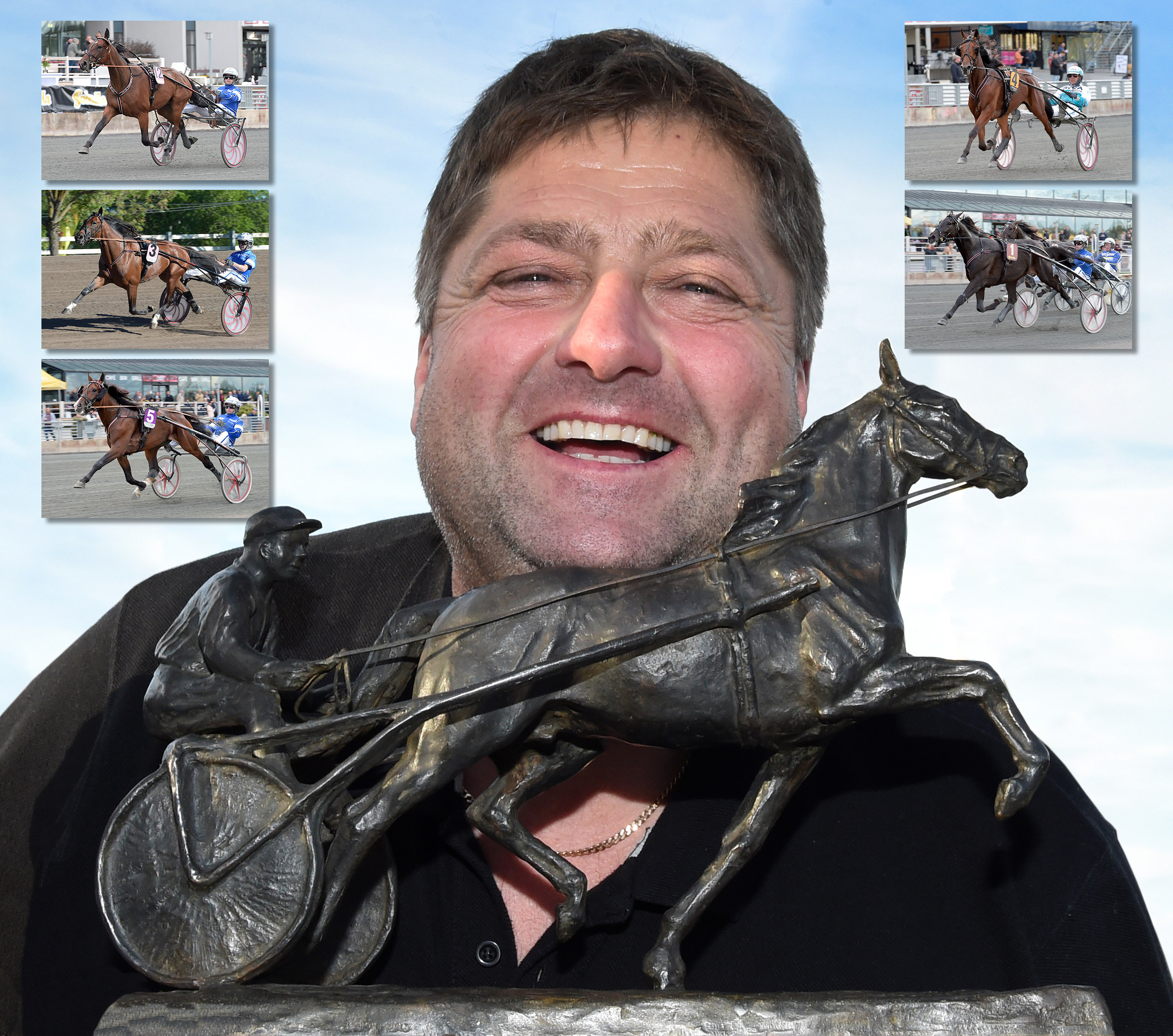 He has won Svenskt Travkriterium twice before as a trainer, as recently as last year with Deimos Racing.
This year Svante Båth is historic as he got five horses qualified for the final - where two of them are hot bids for the win.
"I'm really riding high right now" says Svante Båth.

This Sunday at Solvalla it's time for the biggest race for country's three year olds, Svenskt Travkriterium. Besides the honors the first price is SEK 2 millions, twice that if the horse is eligible for premiechansen.
Svante Båth has had a lot of success for many year when it comes to training young horses and has won many big races. He won both E3 finals this year with Coin Perdu and Capitol Hill. When the eliminations were held last week, it was Svante Båth who dominated. He got five horses to the final, which made him historic. Sören Nordin, Stig H Johansson and Olle Goop had had four horses each in a final since they started having eliminations.
"Of course it feels special doing what nobody else has done before. I'm proud having five horses in the final and when I look back at it, I'm sure I'll be even more proud. Maybe in a year or so. I never even thought of it before that and I had no idea nobody had five horses in the race before. I'm really riding high right now" says Svante Båth.

"Kriterium horses trained well Tuesday"
It's Tuesday afternoon the week of the Kriterium as this interview is being made. Båth has been on the farm in Sundsvall and worked the horses Monday and Tuesday before travelling to Stockholm and his other stable in Knivsta for the rest of the week with racing every night and also the yearling sale.
"We're keeping busy and that's the way I like it. The kriterium horses trained this morning and they all felt great in six intervals around 1:35 speed. I sat behind both Very Kronos and Global Unspoked in Sundsvall" says Svante Båth.

"Always someone who gets disappointed"
Coin Perdu and Very Kronos both won their eliminations in impressive manners and are hot bids for the win. The remaining Båth horses are Global Unspoked, Global Un Poco and Capitol Hill. But just because he has five in the final he won't take anything for granted.
"The more horses you have, the more you know will lose. There's only one winner - unless it's a dead heat of course. There's always some owner who will be disappointed. We had four horses in the derby a few years ago, but only one the year after and then you see it in a different perspective."
You have won the Kriterium twice before, 2002 with Malabar Circle Ås and last year with Deimos Racing. How good are your chances of making that three wins?
"I try not to think like that. I focus on having my horses as good as they can be. We have very nice horses and it looks good so far. But I don't take anything for granted and we need some luck. Villiam raced super on the outside of my horse and could be even better this week. Husse Boko was also very good. He could really get the trip form his post position" says Båth.
Who is the best horse you ever trained?
"I have never answered that questioned but I've said that Staro Showbiz is the most talented horse I've trained. I've had many really good horses; Malabar Circle Ås wasn't big and felt tired until the top of the stretch where he always just flew right by them. He made SEK 15 millions before we sold him to Italy. There's alos Quid Pro Quo who is a phenomenal individual and then there's Luxury Ås and Everest Ås and so on".

"Barefoot and pullouts on Coin Perdu"
Coin Perdu has been the king of the crop so far with wins in Svensk Uppfödningslöpning last year as a two year old and in the E3 final this past summer. He got his perfect record spoiled two starts ago when he made a break in the home stretch.In his elimination to Kriteriet he was back to his winning ways. In the final he will start from post four and will be driven by Örjan Kihlström.
"Coin Perdu (V75®-6) behaved perfectly and i was pleased with him in the elimination. We had him fixed up before his last start but if that's why he was better I can't really say. He wasn't perfect in the start prior to that said Erik and neither was the track even if I don't want to blame it on that. He feels good now and he has shown that he has a very high low point. As opposed to Very Kronos he doesn't do anything wrong and everyone knows how good he is. Most of all he's very strong. We're trying to get a little more out of him for the final so he'll race barefoot (has raced with shoes lately) and with pull out ear plugs".

Would like to hire a shrink for Very Kronos
What about Very Kronos who won his elimination on the front end in a very quick finish and drew post two with Erik Adielsson. He's won four out of six starts and you've said earlier that his ability is equal to Coin Perdu's?
"Very Kronos (V75-6) has unbelievable abilities but he's also a troublemaker. He's very special and I don't think anyone realises how much work we've put in to this horse. We've worked so hard on the mental side with him, there's way too much going on inside his head. If he was a human I would have told him to go see a shrink and go to the bottom of his problems. But on the other hand I don't think he'd sit still long enough, ha ha ha."
"It's very nice knowing you have a horse with those abilities but there's also a lot that has to go right. He gets worked a lot more than the other horses so he can get all his extra energy out of his body. But he's also a very efficient trotter who is also very quick behind the gate. He raced very well in the elimination and they came home a really fast last 500 meters. I think Erik's wish would be going to front and staying there. No changes, he'll race with shoes and a regular sulky. Coin Perdu will also race in a regular sulky."
Who of these two has the best chance?
You won't get me to answer that. It's impossible to pick one. Erik chose to go with Very Kronos since he's so special.
What about your other three Kriterium finalists?
"Global Unspoked (V75-6) was a good second in his elimination and showed a lot of ability last year but he also let me down. After being castrated, he's been getting better but he's still too green for this. I hope he'll make some money in here. Possibly first time barefoot."
"Global Un Poco (V75-6) is a true hard worker who does all he can every time. He's been great all year, but he didn't win his elimination and is stuck with post eight. He needs luck from here against these horses and if he gets a good position he could be third-fourth maybe. Barefoot as usual."
"Capitol Hill (V75-6) is Mr Consistency and a very nice horse who's been in all the big finals. It was a lot of fun that he got to win the short E3 final, since we had him peaked for that one. I hadn't been to hard on him in training going in to the eliminations and he wasn't as sharp as he was for the E3 final. Hopefully with that race he'll be just as good now as he was in that E3 final and he feels great training. He'll race barefoot this time and in these type of races anything can happen and it's not impossible that we could see an upset in the Kriterium. He could be one of the horses that could upset, even if it's more realistic hoping for some money form this post position" says Svante Båth.