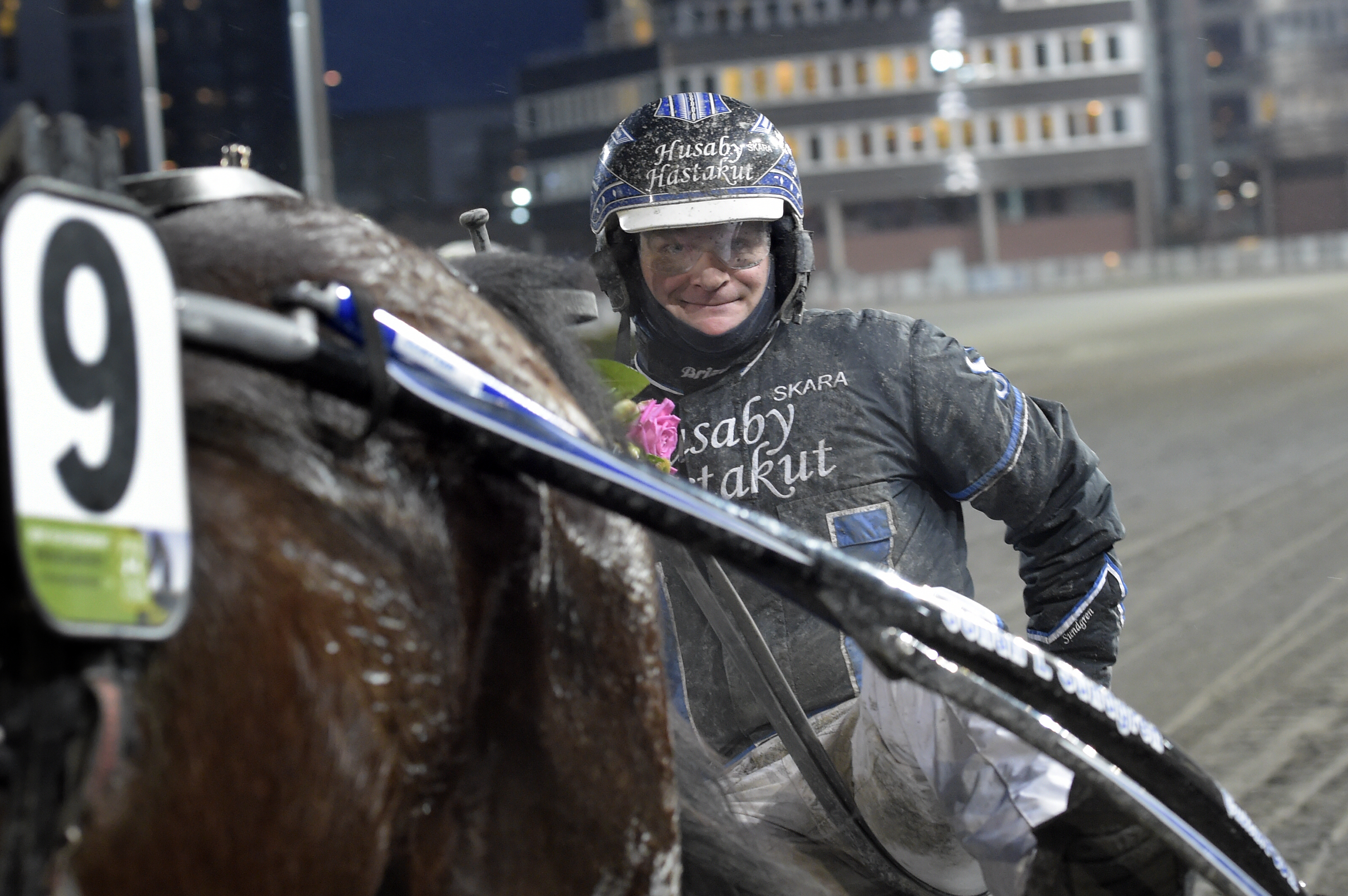 His breakthrough on V75® came as a rookie.
But it took 20 years before Johan L Sundgren became a professional trainer.
The 42 year old is now off to a flying start in his new career.
"That's what we work for, to win races" says the trainer with the fantastic win percent, who now takes aim at this Saturday's V75 races in Eskilstuna.

It was behind Mattis Snix that Johan L Sundgren went from pretty much unknown to multiple V75® winner in early 2000s.
But it wasn't a straight road to the top for the young apprentice driver.
"When I got the chance to drive Mattis Snix I had just had my driver's license for a couple of years. In the beginning everything was going really well and at the time I saw myself as a future trainer or catch driver. But then things stagnated somehow" says Sundgren who comes from a family of horsemen where his two uncles Hans G and Per-Erik Eriksson both were very successful professional trainers for many years.
"I started hanging in John Dahlman's stable as a nice year old and I've always been involved in this business, but I guess I wasn't determined enough to really go all in. If you're going to make it as a professional training you need to be 100 percent focused and determined and I guess there were other things in life that I liked better at the time".

Gets help from his family
But despite that, Sundgren kept working for different trainers and also started making a living as a blacksmith.
And now, all of a sudden, at the age of 42 he's a fresh professional trainer with 19 horses in his stable.
"What really made it possible for me was that I found an owner willing to invest in me. It makes it so much easier compared to doing it all on your own".
It's pretty much a family business together with girlfriend Catharina Samuelsson and also their son Viktor S Sundgren to some extent.
"Catharina has been working with horses for many years and she has also won V75 as a driver. She was away from the horses for a few years but came back when I started training. Viktor is 15 and has a huge passion for this, he wants to come every time we go racing. He won the pony kriterium last year and is going to take the driver's license to drive big horses this spring. I also have former professional trainer Ulrik Pedersen as a consultant, to help me train, which works out well".
The owner's name is Marko Kreivi and his twelve horses are racing under the stable name Göteborg Smart Repair Center AB.
"We have known each other for a long time and it was when he decided to invest in horses and in me, that I decided to go through all the necessary classes to become a professional trainer. It took almost a year, but I'm finally there and it has started out well".

Trains for strength
That's no understatement. Sundgren has started off his professional career with five wins in eleven starts and on Saturday he is chasing his first V75 win as a trainer.
"Things have gone better than expected and we've had good results. It's almost like they all improved a notch when I got my license. But in the overnight races the goal is to keep a high win percentage. I try to pick their spots and enter where I think they'll have a chance to win since I think the horses we have are pretty good".
"V75 is a different story. When I think a horse is good enough to be compatible there I'd like to try, but it's tough and you have to be happy with whatever you can get".
How do you evaluate your chances on Saturday?
"I definitely like Fleur Mearas' chances better. That's a horse I think very highly of. She's tough and can handle doing a lot of the work, so I wouldn't mind an aggressive drive if the driver wishes to do so".
Why don't you drive your horses yourself?
"Mostly because I've had a lot of back problems the last year. If I can get the best drivers out there, I'd like to use them. I don't have a given number one driver, but I have a very good relationship with Thomas Dalborg, who will drive Edmund on Saturday".
How do you train?
"The common thread is that I train them in deep sand with long sessions twice a week. We also have plenty of other options if I think that's needed. My philosophy is to get my horses very strong and let the speed come by itself as they get older. I've never understood how to train a horse for speed. If someone knows how to, feel free to let me know".
What are your goals this first year as a professional trainer and how big of a stable would you like to have?
"As far as earnings go I have a number in my head that I would like to keep to myself for now. But I wouldn't mind getting some horses to train. If we could double the amount we have now, that would be great" says Johan L Sundgren.

This is what Johan L Sundgren has to say about his V75 starters:
"11 Fleur Mearas (V75-2) is a mare I think very highly of and I think there's a lot more to come from her, as long as she stays healthy. She is not dependant on any certain trip and the reason that she was driven so conservatively on V75 two starts ago is because she isn't really quick enough for the short distance. That start got some more speed into her legs and she raced very well in her last start, before she used to be better when she got involved in the race early on. I haven't trained her any differently or tried to get her sharper for this start, it's a long season but I think her form should be good enough and she feels good. Despite a bad post (in the second tier) I have some hopes and I wouldn't mind an aggressive drive. No changes".
"11 Edmund (V75-4) has a very long gait and isn't very explosive because of that. The reason he could win over the short distance was thanks to a very high pace in the lead and he had no chance in his last start just because he couldn't switch gears when they sped away. His lung capacity is enormous, we train him in a pressure cart in the sand or he won't get tired. From this post position he's dependant on the tempo, the higher the better. We continue with the open bridle, since he has responded well on that, but we might try with a regular pull-off earhood instead. He's had a pull-off earhood before but then we've had the earplugs stay in his ears. Thomas thinks it will be better for him if we pull it all. We'll race him in an old style sulky again, but next time he draws well enough to make the front behind the gate I want to try an American sulky. It looks like a tough race so I'm happy if he gets a nice check".