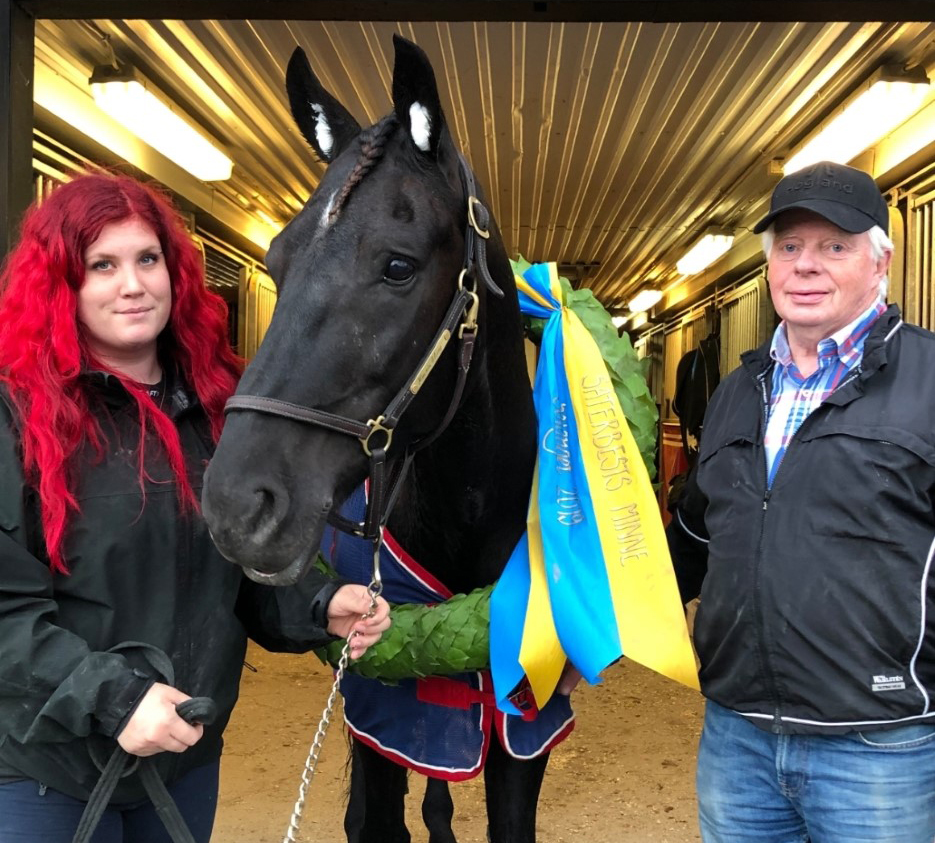 There's a 46 year age difference between the training duo.
In Bollnäs on Saturday Håkan Norman's and Amelie Nilsson's mega surprise from V75® at Solänget - Husnäs Elving - can take his second consecutive win in the Swedish Trotting League and V75.
Top driver Erik Adielsson will once again drive.

Husnäs Elving was the hardest winner to find for the V75® bettors last Saturday at Solänget when Erik Adielsson steered the seven year old gelding to victory in the coldblood race Säterbests Minne.
Only 3% of the tickets had the horse from Sollefteå.
The hope is now that he will keep it up in V75 at Bollnäs too. V75-4 on Saturday is Jon Olsson's minne with SEK 200,000 to the winner, where Husnäs Elving is handicapped 20 meters better than his worst opponents compared to last Saturday.
"We got lucky with the condition this week. That feels very good. Of course our hopes are high since he performed so well last week. He should have a chance again - but we don't demand a win out of him" says 26 year old Amelie Nilsson who helps with the training.
Håkan Norman, 72 needed help with horses and contacted Amelie Nilsson a couple years ago and asked her to help out.
Håkan and Amelia lives around 10 kilometers from each other in Helgum in Sollefteå township.
"Here in Helgum everyone knows everyone so to speak. Håkan knew my parents and knew that I had worked a lot with trotters. That's how it got started and we're a pretty good team" says Amelie Nilsson who has moved back home after having gone to school at Wången and worked in racing stables.

"We train him together"
She felt like she needed a break from the bigger stables and moved back home. Her working at a nursing home gives her time to help out with Håkan Norman's two horses.
Husnäs Elving was named after the village where Håkan lives.
The dame Nylands Xenia wasn't successful on the racetracks and she's now the dame of Husnäs Elving (by Månprinsen A.M.) and also his full sister Husnäs Tilja.
"I want to train Tilja all by myself now. Elving is not a complicated horse and we train him together, Håkan and I. I train him under saddle and I also go a finishing trip before a race to make sure everything is good" Amelie says.

An easy week
Husnäs Elving will now race back to back Saturdays when he goes to Bollnäs to race in Jon Olsson's Minne following last weekend's victory at Solänget.
"He will just take it easy and jog this week, get some massage, feel good and enjoy being a horse. We did some changes last week so that he raced barefoot upfront and we also changed the bridle. He will go the same this week. His form is very good and if can copy the performance from last week he should have a chance here too" says Amelie.
Amelie's mom Jessica Nilsson was an amateur trainer, licensed at Dannero. Amelie has helped out in the barn since she was little and her mom Jessica is now Amelie's biggest fan.
"I have won five races, all with Husnäs Elving. So he's very close to my heart, this guy. A lot of the locals here follow him when he races and they think it's a lot of fun that he's doing so well. Mom is still the loudest fan, you can hear her all over Helgum when she cheers him on".

"Erik is a good fit for Elving"
Amelie Nilsson hasn't driven enough to be eligible to drive on V75.
But Erik Adielsson did a good job when he won with Husnäs Elving in his last start, Amelie thinks and on Saturday they can take the second consecutive V75 victory together.
"It's too bad I can't drive all the races I want right now. But Erik drives well and was a good fit for Elving, so of course we are hopeful now" she says.
Strong, quick and close to making breaks are some good ways to describe Husnäs Elving. The fact that he's close to making breaks in the race is something that Erik also mentioned at Solänget.
"That's just the way he trots. You have to communicate with him during a race to get him onboard with what you want him to do. He's a bit of a show off - but he knows where the finish line is".
He drew a good post position this time, in 'volt' start. How quick can this show off leave?
"Sometimes he can be very quick, but the next time he acts like he doesn't know what he's supposed to do. It varies a lot from time to time. The dream scenario is that he does know what he's supposed to do so that Erik can get him out of there well and get a good position".