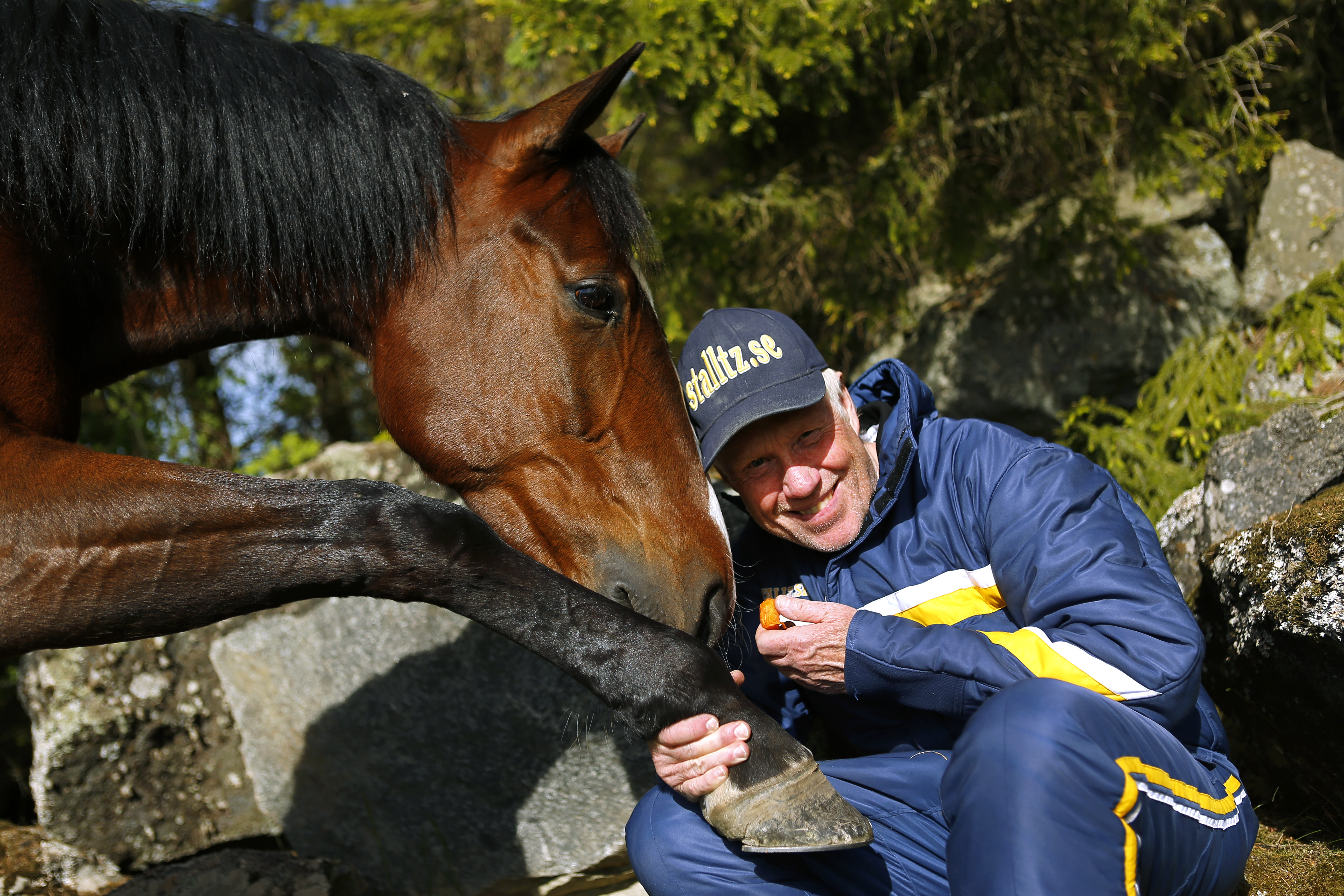 It will be a nice summer day in Kalmar on Sunday.
Stefan 'Tarzan' Melander would like to decide so and thinks mainly of his horses.
Disco Volante had a hard time with the track in the rain in Elitloppet.
"Disco still feels good but he's never been good on a bad track - so we'll forget about Elitloppet".

During the midsummer weekend in Sweden, V75® will move to Sunday when Kalmar traditionally will be the host with the gold division horses in Kalmarsundspokalen as the featured race.
Post time for V75 is as usual 16:20 on Sunday.
The feature Kalmarsundspokalen over the short distance will go off as the third leg and the Solvalla trainer counts several quick leavers behind the gate.
"It turned out to be quite a few leavers in here who all drew well - but he's quick out of the gate himself too so that's alright. We'll see how he gets away" Melander says.
Disco Volante is indeed quick out of the gate and was mentioned as a horse who could get the lead in his Elitlopp elimination. Two start specialists inside of Disco Volante on Sunday are Flemming Jensen's Slide So Easy and Johan Untersteiner's Pastore Bob.
"But that's nothing I have to worry about. I'm probably out watering the tracks when the race goes off on Sunday. I'm not going to Kalmar. That's up to Ulf Ohlsson and how the horse feels. He can leave very fast though" says Stefan Melander.

"Things just went wrong"
Disco Volante came to Elitloppet following a second place in Italy's biggest race, Grand Premio della Lotteria. Stefan Melander was very optimistic before the race and said his ability to leave could be a deciding factor.
But the surface wasn't the best that Sunday. The rain was pouring down and Disco Volante took a bad step behind the gate before the start.
"Yes he did something he normally never does. Jorma Kontio said he almost made a break 100 meters prior to the start and lost a length there. Things just went wrong. I think we can just forget that start even if it was Elitloppet" says Melander.
Disco Volante needs to be able to grab the track and when the track is bad he doesn't do himself justice.
"It was pretty expected when the track was so bad. A catastrophe almost. But the conditions were difficult and there wasn't much the track crew could do either. We just have to move on with another race and Kalmarsundspokalen is fitting for him".
You were pretty optimistic with Disco Volante before Elitloppet?
"Yes and looking back at the race I don't think I was wrong in being optimistic, it wasn't one of the best Elitlopps ever contested. Many horses had problems that day. We have a good horse in Disco and I'm sure on a good track he would have done well there".
How has he been after that start?
"He feels great in training. So it looks very interesting, I think. When the wings fold we just have to hope everything is back to normal with Disco. No, he feels very good, extremely good. So I have no complains now a few days before the race. He'll race barefoot in some way if the track is good".
Kalmar had no luck last year when it was pouring down during their midsummer card.
"Let's hope the weather will be nice on Sunday. Kalmar usually has a great track surface".
Digital Performer was driven aggressively and advanced up outside the leather in his last start on V75 in Östersund. On Sunday he has almost identical conditions with post position twelve in V75-1 for Örjan Kihlström.
"He usually draws high numbers when he races so that's nothing unusual. Örjan has to hope for a high tempo. The form is on top but the post position is the worst possible. If the race is overpaced, he's strong but I think he needs a trip to do here".