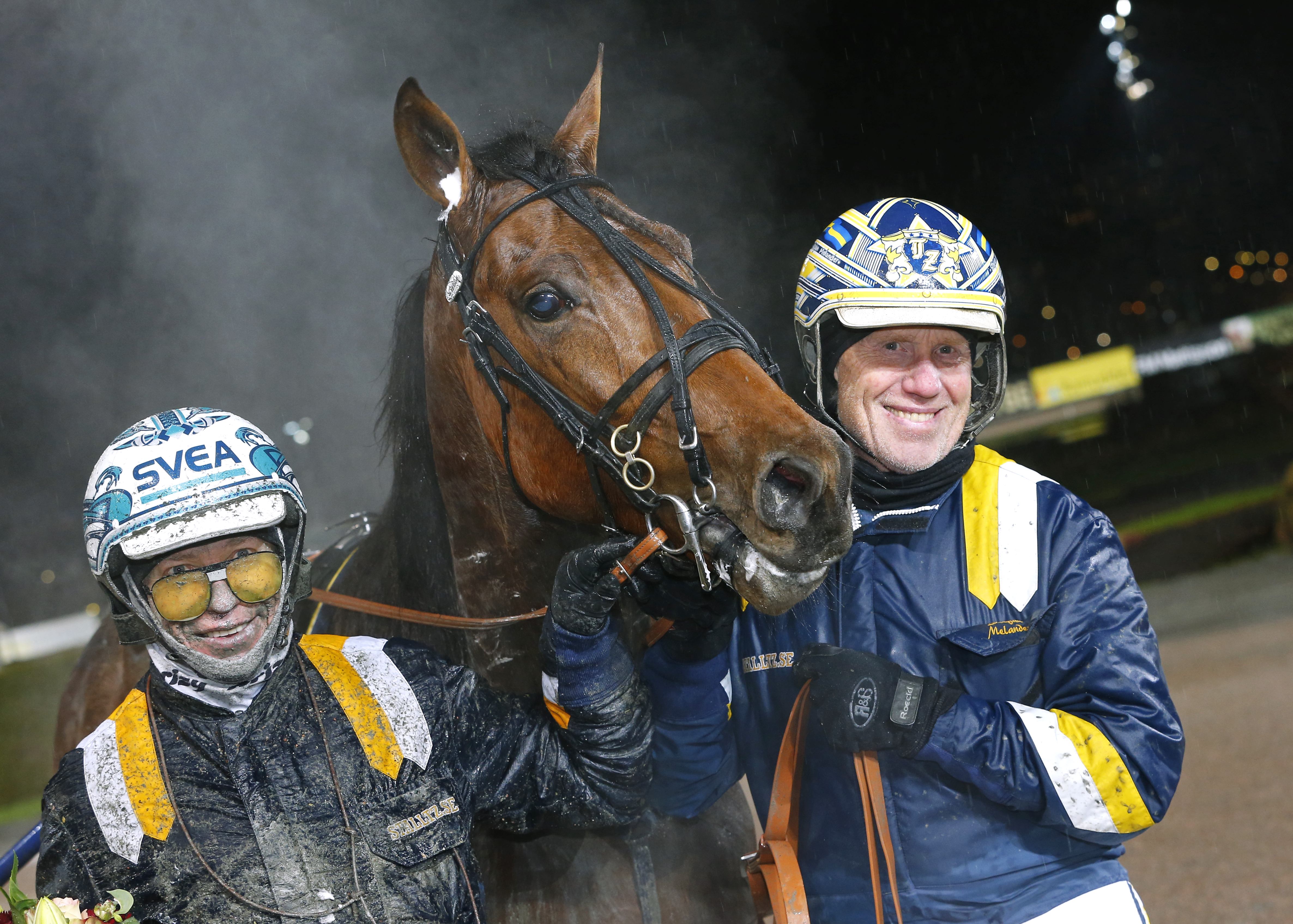 He is the super talent who has the potential to make a name for himself in the elite in the future.
Digital Summit shone bright in his return and has drawn a good post position in V75® at Mantorp on Saturday.
"He's a super horse. I don't want to brag over him too much but he's actually a very good horse" says Tarzan.

The Solvalla trainer has for many years said that he will cut down the size of his operation and he has done just that. Stefan 'Tarzan' Melander is selling brood mares, yearlings and race horses constantly and the number of horses is slowly reducing. Many of the horses have been sold at auctions but he has also sold horses privately. The big Finnish owner Reima Kuisla recently bought gold division winner Evaluate.
"When Nuncio retired I said that I was also going to retire. But now I have really comitted myself to it and I have started to sell horses. It says I have 62 horses in training but it's less than that. I have 60 right now, so to get down to 25, I have to sell another 35 horses" says Melander.
But Tarzan hasn't been able to hold back from taking in new horses in training and also buying some new horses. He has four new American four year olds in his barn; Chestnut Hill, Capricornus, Maesteraemon and Hollywood Story (finished fifth in last year's Hambletonian). Of these four, Chestnut Hill has the best racing credentials with total earnings of SEK 5.2 million. His biggest win came in the Canadian Trotting Classic last year. He also finished third in the Breeders Crown, both as a two and three year old. Chestnut Hill is also the horse that Tarzan bought and owns himself.
"All four are very nice horses and I think they will do well on the tracks. It will be exciting and we'll see if maybe some of them will come out and start racing in April" he says.

"Had OCD surgery - been off for a long time"
We have seen Disco Volante win several gold division races this past winter and on Wednesday this week Milligan's School is making his first start of the year on V86® at Solvalla. Behind them there are several future top horses in the Melander stable waiting to step into the spotlight. One horse with potential to break into the elite in the future is Digital Summit. He raced very well during the fall of his three year old season and won several races. He continued his winning ways as a four year old, but he only made four starts before the problems started. He was forced to a long break but he had shown by winning seven out of 19 starts and making SEK 1.1 million that he was a horse above average.
"2 Digital Summit (V75-6) had some smaller isssues during his three year old campaign and I don't really know why. But during his four year old campaign it got much worse. He got on a line and was no good. So I decided to x-ray him and they found that he had OCD and he had surgey done in both hocks. It took longer than we expected to get him back" says Melander and adds:
"We tried to get him ready for the Derby, since I really want to win that. But there just wasn't enough time and I'd rather have a horse that I know is good and gets every chance to come back at his own pace. Then I didn't want to race him with corks, so he just trained over the winter".

"Had felt incredibly good - Örjan very pleased"
Digital Summit recently returned to racing after a ten month long hiatus. He won a lunch race at Solvalla where he sprinted past his opponents after a nice trip.
"My horses usually need a couple of starts before they are in top form but he had felt incredibly good in training and it was good of him to win off of that long break. Örjan was very pleased with him. Sure, it was a lunch race, but he closed well and should go forward off of that start. He has come out of the race well and has felt good in slow training after that. I last trained him last Saturday and he felt very good" says Tarzan.
How good is Digital Summit? Can you describe the horse?
"He's a suoer horse. I don't want to brag over him too much but he's actually a very good horse. He's a classy horse and he trotted fast when he was second behind Hail Mary a couple of times last year. He can also leave pretty well. He's an intelligent horse who never makes breaks. He's both strong and fast. If Örjan Kihlström think it's a nice horse, then it is a nice horse".

"Don't want to be too optimistic - entered barefoot but will race with shoes"
On Saturday Digital Summit will be the favorite in V75-6 at Mantorp. It's a leg of the silver division and he drew a perfect post position two behind the gate. In the sulky once again is Örjan Kihlström and trainer Melander thinks he should have a good chance to win, even if he lays a bit low since the horse only has made one start in ten months.
"It's not that easy to just go out on V75 after only one start in almost a year. But there aren't that many other races for him so he has to go out here. The post position is good but I don't want to be too optimistic until he has made a few starts. My horse feels great and I'm sure he will race well".
You have entered him barefoot all around, is that how he will race?
"It was more a safety thing but I think he will race with shoes just like in his last start. I don't think we will make any changes" says Stefan Melander.
You have two more starters on V75. What are their chances?
"5 Union Forces (V75-3) has been very good lately and feels great in training. He's in tough here in the gold division and I'm happy if he can finish third or fourth. He will race barefoot all around and with a blind bridle".
"7 Rotate (V75-5) is a horse I always expected to be very good but maybe the castration took longer than usual to work on him. He has won two monté starts recenlty and two starts ago he raced very well when Örjan finished third with him. Too bad he drew post position seven behind the gate in a short distance race now. He will race with shoes and an open bridle".