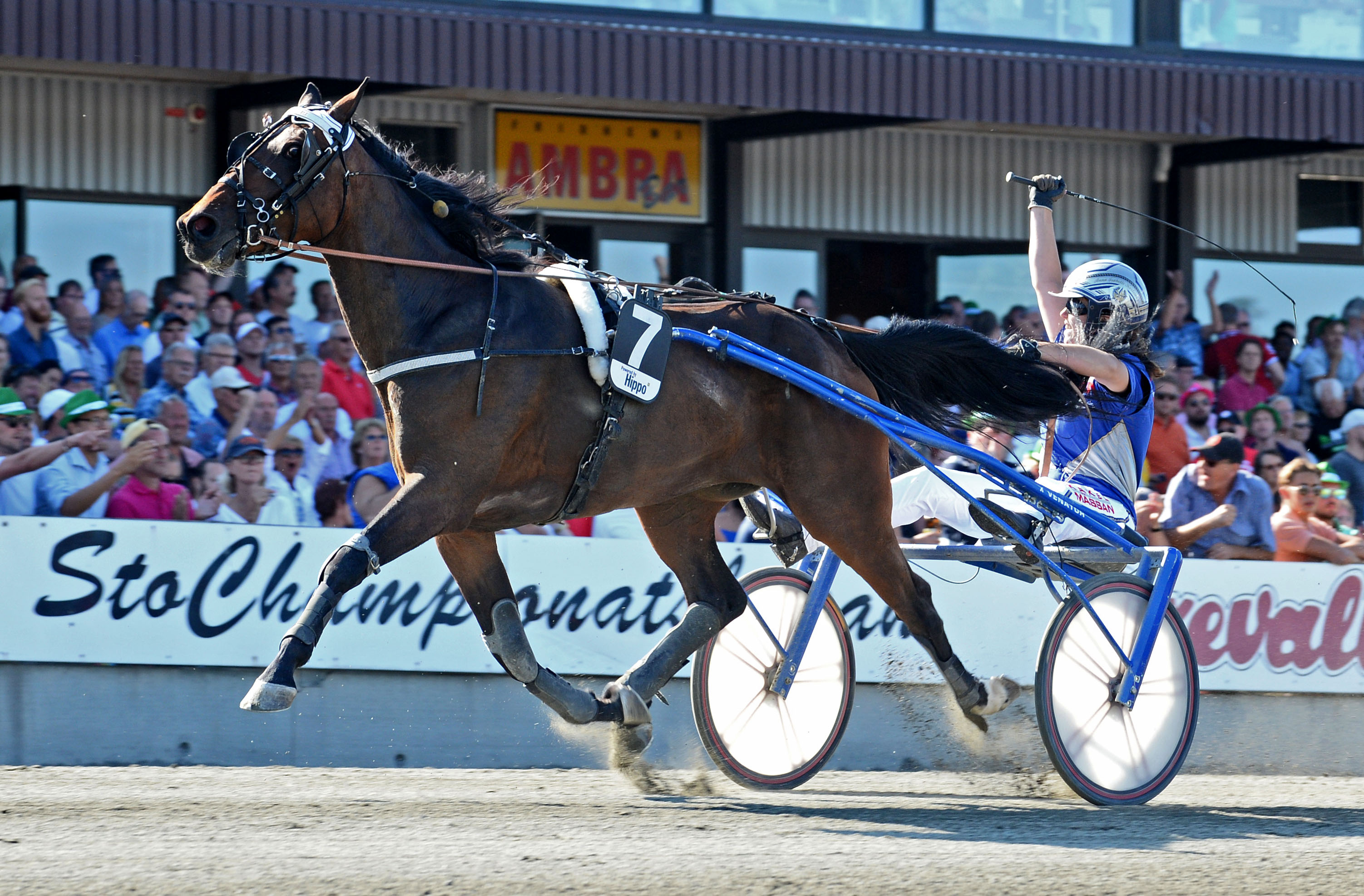 A euphoric V75® victory.
Little over a week ago Rafiki Fri and Anna Isabelle Karlsson took the biggest win of their careers.
This Saturday they can capture an even bigger win when they’re chasing the SEK 300,000 in the final of Sommartrav®et at Rättvik.

In front of the big crowd at Axevalla’s stochampionat weekend Rafiki Fri (V75®-7) and Anna Isabelle Karlsson finally ended their long run of second and third place finishes. After sitting fifth over and advancing three wide the last 700 meters Rafiki Fri won convincingly.  The victory was the duo’s first on V75 and the joy was obvious when the winning driver was interviewed after the race.
“I am so happy, this was so damn fun. It was out turn now”.
Now over a week later the most euphoric joy has calmed down a bit but the win is still very highly regarded.
“It’s my biggest win and it still feels great after getting back down to earth again. It was so much fun taking my first V75 victory but then you realize you’re just a regular mortal person” says Anna Isabelle Karlsson laughing.

“Takes life with a grain of salt”
Rafiki Fri is trained by Hans Karlsson while his daughter Anna Isabelle does the driving.  As a matter of fact she has driven the five year old in every start so far. Together they’ve been top three in over half of the 48 starts and eleven of them have been victorious. Despite the fact that Rafiki Fri still doesn’t really understand racing yet.
“He’s the most laid back horse in the world who thinks life’s all about food and playing with his buddy. When you train him at home you would never think he’s that good of a race horse. He’s not much for training, he’s more like a hippie from the 70s who’s just chilling out” says Anna Isabelle and continues:
“He’s a very honest horse but he can lose focus easily. He’s more and more growing in to a race horse but I’m not sure he’s quite there yet. It’s good that he’s laid back and all but I wish he’d realize a little sooner when it’s time to race. Once he does there’s hopefully more to come”.

Right trip - like last time
On Saturday Rafiki Fri and Anna Isabelle Karlsson return to V75. But this time they’re facing much tougher opponents such as On Track Piraten and Volocity de Vie.
“This is a much tougher race than the one we won and we’re not expecting him to just go out and win this. We need the right trip, the right pace and  the right horse to follow - like last time. Of course we hope he can do well here too but this is a very tough race” the driver says.
Just like last time they will start with a 20 meter handicap over the distance 2,640 meters.
“He’s strong so the long distance fits him well. He can’t leave that well so we’ll have to try to get away as good as we can and find a spot somewhere. We can not get away last and lose 20 meters to On Track Piraten and we need someone good to follow”.

If it takes you all the way to victory how huge would that be?
“Oh my God, that would be even bigger than last time. Now we’re past getting the first V75 win so we have to aim higher” says Anna Isabelle Karlsson.