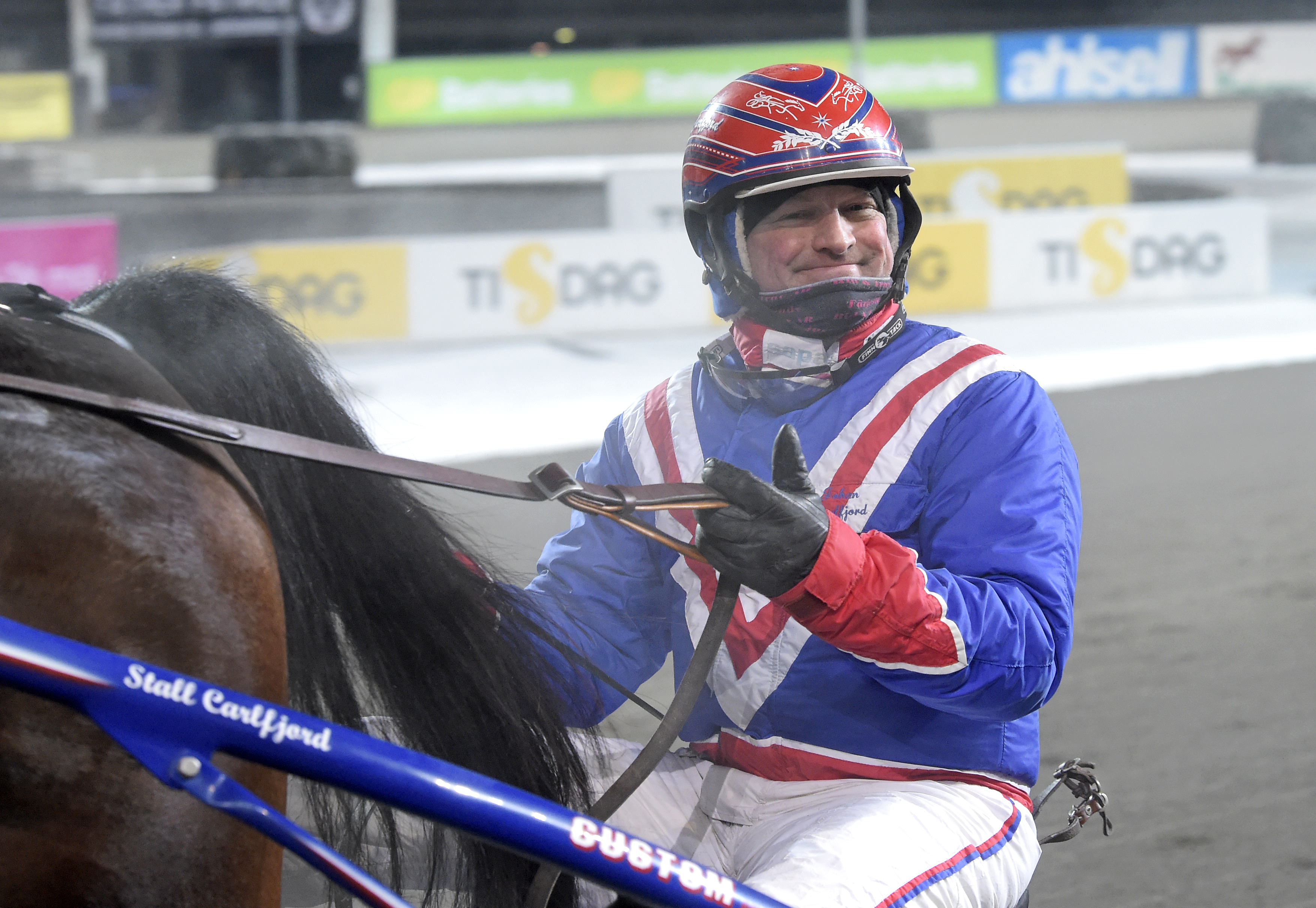 During the week he sells houses and farms.
On the weekends he trains horses.
On Saturday real estate agent Johan Carlfjord is aiming for a longed for V75® victory when his home track Mantorp is hosting a jackpot V75 card with SEK 40 million in the pot.
"I still love the racing side of this with a passion, if not I wouldn't be driving myself" says the former professional trainer.

The years around the new millennium Johan Carlfjord was a successful trainer at Mantorp.
But after an accident in 2008 he decided it was time for a career change.
Today he's an even more successful real estate agent in Linköping, at least if success can be measured in money earned.
"Let's put it like this; nothing beats working with horses. It's so much fun. But as a professional trainer you always have the knife at your throat financially. And when things don't go so well you have to answer not only to yourself but also to your owners. Now our life is nice and quiet and we're just doing it for the fun of it. It's a security knowing you have an income and not having the pressure of the horses having to perform so you can make a living" says Carlfjord who quickly had success in his new career.
"When I went down and injured my shoulder it just hit me that I might never be ok again. Then I would have to find something else to do. So I decided to go back to school, 28 years after I had quit. After I had gotten my old grades up, I decided to study to become a real estate agent".
"Once I started working I had put up goals for myself to reach, I was going to give it a year. I knew after one month this was it for me. Having sold horses for most of my life, this wasn't that hard".

Sold many horse farms
That horses still mean a lot to Johan shows - he has five horses in training.
"We have a couple of brood mares and a pony too. I'm in the stable every morning and I've dedicated Wednesday afternoons and weekends to the horses. Other than that my wife does most of the work with them, since she works from home. My daughter is 17 and she helps out too".
Despite only driving 20-30 races a year nowadays, the real estate agent doesn't seen to have lost his touch.
As recently as last Wednesday he won Gösta Nordins Minneslopp on V86® with a rare catch drive and that made it three wins in five starts so far on the year.
The other two wins were taken with this week's V75® starter Hugo R.C.
A look at Johan's real estate website shows several villas and a horse farm, priced at SEK 15 million.

Does your past as a horse trainer help getting you horse farms to sell?
"I think so yes. I've sold many horse farms over the years. One of my first objects to sell was an old colleague Bengt R Karlsson's farm when he retired. A farmer bought it and plowed up the track on the second day. The main focus now is smaller farms, around SEK 4-5 million. The bigger ones usually require longer time".

Time is also something that Hugo R.C. required.
The home bred gelding didn't start racing until he was five years old and seems to be in the shape of his life as a nine year old.
"I think he's found another gear over the winter. He's by Echo and it's not unusual that they develop late. We've also finally found the right equipment for him".
How so?
"He's always been very lazy in a race. But when we put a screen over his eyes when he raced at Romme last fall he turned into a different horse. Then he almost was too hot in a race instead, so we've been experimenting with different bridles. In his last two starts he's raced with a blind bridle, a shadow roll and a smaller screen over his eyes. It's a perfect combination. And he's also stayed sound and been able to race consistently which has made him a little sharper".
Could this be his best year racing?
"Let's hope so. He's off to a good start at least".
Can he win on Saturday too?
"He hasn't been good enough to win on V75 before, but he's also never been in this kind of form. I hope I can time the start better than I did at Solvalla in his last start".
You found second over, wasn't that good enough timing?
"No, I wasn't very happy with that start. I hope I can time it like I did at Lindesberg last summer when we went straight to the lead from post seven".
If you do, will you race him in the lead?
"I will if we get the lead, yes. It's a very even race on paper so I'm sure the trip will decide who wins it".
Any changes?
"No he will race with shoes again since he's been so good like that. He can race on any type of track condition, should it be a demanding track I think it would benefit him, but Mantorp's track been good so far this year".
What be more fun, to sell that horse farm at SEK 15 million or win a race on V75?
"Don't say I will win, then I'll get nervous. It's always pleasing to sell a bigger object to a client at a price that makes them happy. The fact that I get to make people happy is the best part of being a real estate agent. But winning V75 would definitely top that".
If he does, it would be the first time in over 20 years that he wins in the premier league for trotters.
"I had a couple of horses that were good enough for V75 during my last years as a professional trainer, but never got to win. And when I won both the elimination and final of Diamantstoet in 2013 with Clara R.C. it was raced outside V75. I don't even remember which was my last V75 winner, it must have been in the late 90s" says Johan Carlfjord.
Turns out his last winner was Als Super Blaze who won at Jägersro on September 6, 1997.