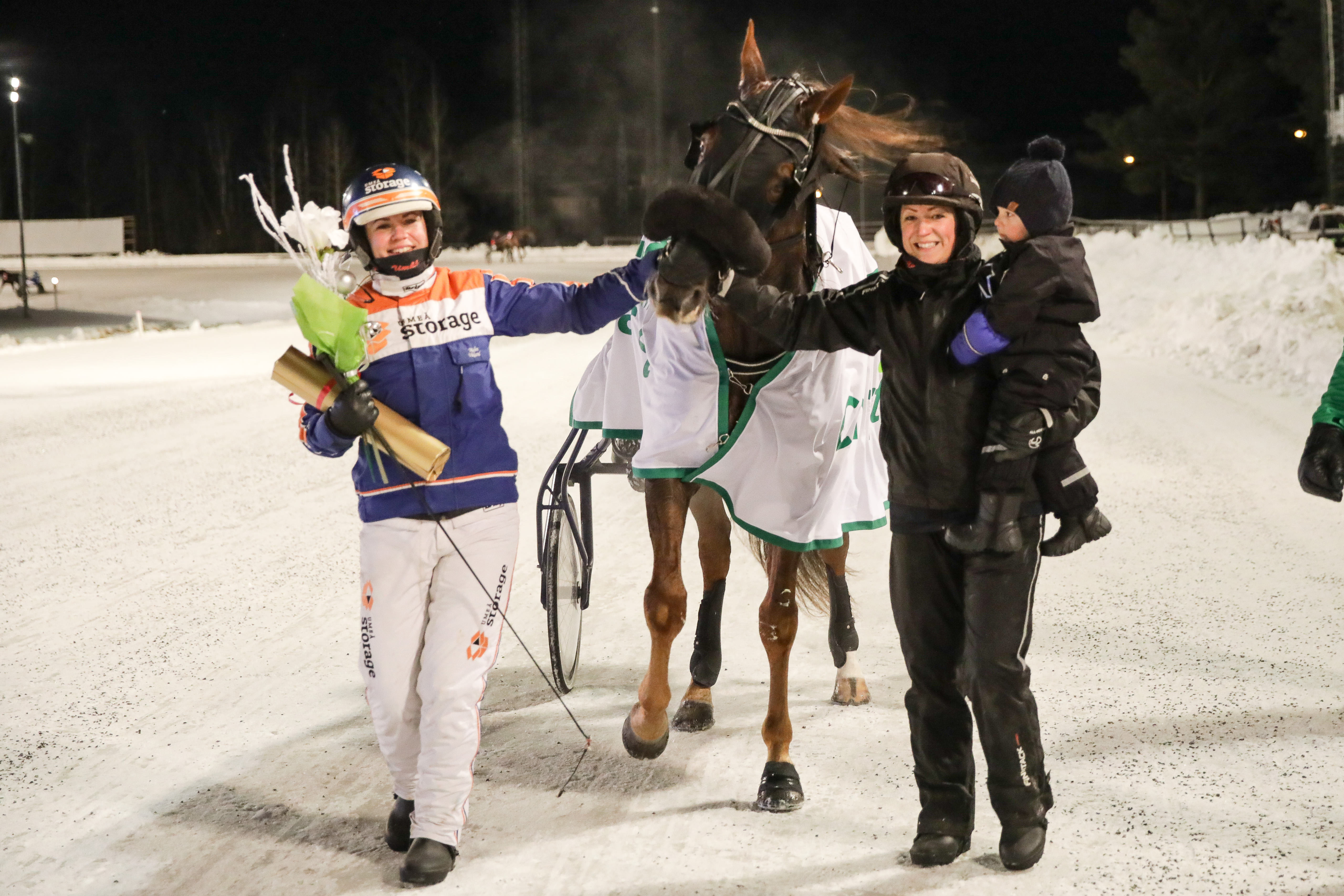 V75®: This transformed horse can make the girls cry more tears of joy

There were tears of joy and lots of feelings following the first V75® victory at home in Umeå on Christmas day.
Jaguar Håleryd got the biggest victory so far for the successful team of trainer Linnea Lundgren and driver Malin Viklund.
On Saturday this transformed horse can take his fourth consecutive win.
"It's a greta feeling going to the track with a horse you know can win. He's one of the horses who can win it" says Malin Viklund.

The Umeå apprentice got got her breakthrough as a driver last year and the best Christmas gift was the one she got on Christmas day. Together with Jaguar Håleryd she took a very popular win at their home track. The fact that the trainer is her best friend Linnea Lundgren doesn't make it any worse.
"It's fantastic to take my first V75® win with Linnea's horse and to be able to do it here at home in Umeå. She's been by my side and been my right hand for half my life. And it really warms my heart to see so many come out to congratulate us. this is how it's supposed to be" said the popular home town driver after the win.

"Fun to see it being so appreciated"
With over a week's distance to her V75 win, it's still something she can't stop talking about. To finish off the best year of her driving career, she got win her first V75 race with a horse trained by her best friend and who she also helps shoeing.
"It was very emotional. It wasn't only my first V75 win, it was Linnea's first start on V75. We've been side by side our entire lives so far, both in the racing game and also outside of it. Linnea works with the youth racing at Umeå and we've helped and supported each other a lot. It means a lot that we were able to win here at home. Fun to see it being so appreciated too. A lot of people came down from the restaurant to the winners circle to congratulate us and it felt amazing" says Malin Viklund.

"It's been a fantastic year"
32 year old Malin from Röbäck works as an apprentice for amateur trainer Ingemar Hultqvist (stall Ratu) together with Samu Sundqvist. The trio has a small but very good stable of eight horses who've had a lot of success the last few years. Last year their horses win a third of the races they were in and made a total of SEK 2.2 millions.
The highlight was the last Sunday in October when they took a double in the Breeders Crown semi finals. Siblings Eva I.H. and Selmer I.H. both win impressively that day.
"It's been a fantastic year even if we wish we could have topped it off in one of the BC finals. In general they've raced great all year and it's been going better than we could have hoped for. We have a small stable of very nice horses and that gives us a lot of time to put in to each horse. Samu is the one managing it and doing the training and we work very well together. Samu has made me a lot better too" says Malin.

Breakthrough year last year
She's had a lot more success as a driver the last couple of year and even if 2016 was good with 21 wins, 2017 was even better with 32 wins and SEK 1.3 millions in earnings. Malin's best year so far in her driving career.
"Last year was definitely my breakthrough year. A few years ago I drove less and less but then i decided I'm really going to drive as much as I can and it's paying off now. It went much better than I ever hoped".
"The best way to get better as a driver is just to drive as many races as you can and get as much experience as possible. You learn something every time and i want to drive all types of horses. Never under estimate anyone and I've always said that you even learn from driving bad horses so I never turn down a drive".

Real home made shoes on Jaguar
Returning to Jaguar Håleryd who's had such a transformation since being purchased and coming to Linnea Lundgren in March of last year. the four year old gelding was previously trained by Per Linderoth and winning his first lifetime start he showed mostly breaks. In amateur Linnea Lundgren's training he's found himself and win six races including his last three starts.
"Jaguar Håleryd is actually a really nice horse but he's been very immature earlier. Linnea has done a fantastic job with him based on his conditions. First to get him to function again and the secondly to get him to start producing on the racetrack."
"He's gotten better and better and after some time we realised his problems started with his feet. It took Linnea and I some time to figure that out. Linnea is the one training and taking care of the horse I've been the one shoeing him and we've both found it odd how his gait falls apart. So now he races with a pair of home made shoes and pads and it seems to work out well" says Malin Viklund.

"Has never lost eye to eye"
What type of horse is Jaguar Håleryd?
"He's very versatile, can leave fast and races well from all positions. He's won from the lead, from outside of the leader and from the back of the field. He's very pleasant to drive, he never wastes any energy. He's no show off who can win by open lengths, he just does whatever is needed. It can look a little worrying when I have to chase him but he's a very honest horse".
"He's never lost when he's been eye to eye with another horse. He can win by a nose in 1:18 just as well as in 1:15. It feels like he's got good ability and he's still on his way up".
What do you think about his effort at the V75 win in his last start?
"I was very happy that he behaved so well in the start since he's struggled there before. He stepped out of there very well and when I got to dictate the pace he was almost obliged to win. I think Vincent Caprese could have slingshotted by us but he put in a step and lost all his speed there. Even if he didn't win by a big margin, he wasn't all out. I put the pedal to the metal last 500 meters but he's not the type of horse that will speed away from a field".

"Post position a plus - better form behind"
It's time for another V75 start this Saturday for Jaguar Håleryd. he's in V75-2 from post seven behind the gate and will be driven once again by Malin Viklund.
"Post seven is a plus for him. He's better when he's a bit out behind the gate where it goes faster so that you don't have to grab in to him. He's got a bigger chance of behaving from those post positions. He behaved well last time form a post more towards the inside and it's the first time he's felt so safe form the inside".
"I've never chased him out of the gate, he's always left on his own and he can leave out of there pretty well. Whether we get to the front again or if we end up in the back of the field remains to be seen. I think he's better from behind when he gets to chase the other but if he ends up on the front end he can do that too. I thought he was heroic two starts ago after making a break at the start just to go around the entire field to win".
"I haven't studied his opponents yet but he's good for his class and the fact that everyone has to race with shoes is a plus since he always does anyway. He can race on any type of track; a hard track, icy track or sloppy track. I realise this race is tougher than the one he won in Umeå, but I think he's one of the horses who can win this. It's a great feeling when you go to the track with a horse like this, a horse you always have a chance to win with. It would be fantastic if we could start off the year with a win. No changes, shoes on and the regular sulky" says Malin Viklund.