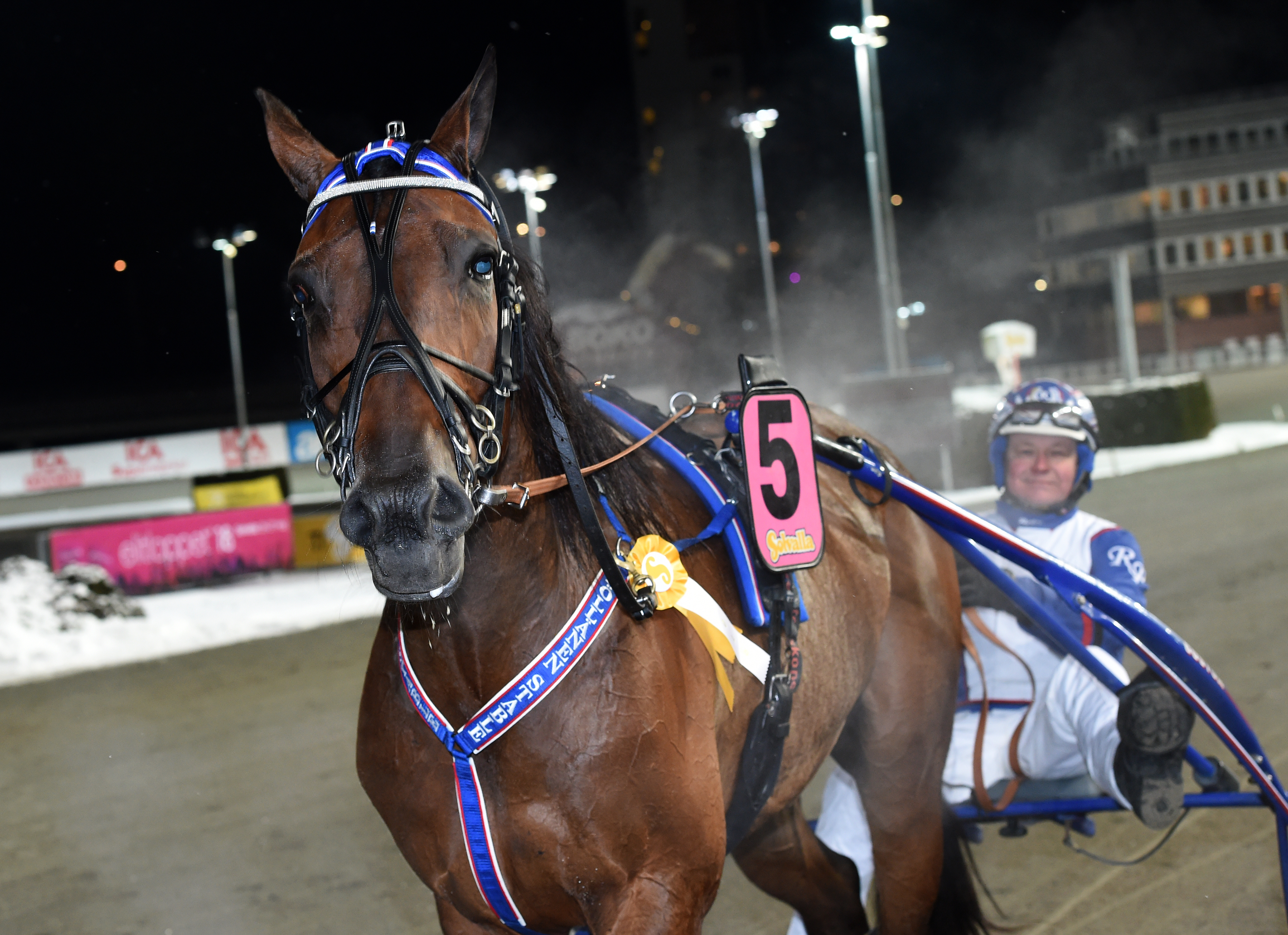 In his 17th try last year the consistent money maker Västerbo Grosbois finally got a win on V75®.
The horse from Gävle is coming to this week's final of the silver division at Åby with two wins in a row, both taken in the premier league of trotting.
"It almost felt unreal when he took his second won in a row, but in this form anything can happen" says trainer Rauno Pöllänen.

V75® was the biggest scene for the eight year old gelding Västerbo Grosbois during 2018.
He made 17 starts on V75 last year and never finished outside the money, which resulted in SEK 747,000 on the account for the 15 owners in Storåsnäll KB stable.
On December 29th - in the last start of the year - all the hard work paid off when he won on V75. At Romme racterack he ralied to win in the silver division thanks to a perfect drive by Rauno Pöllänen.
A couple of weeks ago he won again in the second highest class, at Solvalla. Västerbo Grosbois is very quick out of the gate and Rauno Pöllänen copied the tactics from the previous start and took the lead, let a horse go, sat in the pocket and got out in time to win.
"It felt so good that he could end last year with a win. Even if he was in better form in his last start, it kind if felt unreal to win two in a row. I thought the entire year last year that I had a horse that could win on V75. He raced against the best horses and raced super without getting that win" says Rauno Pöllänen.

"Normally he'll take the lead"
In this Saturday's V75-7 at Åby, Västerbo Grosbois drew post two behind the gate. A perfect post position according to the Gävle trainer and who doesn't think he miss getting to the lead.
"He's very quick and normally he'll take the lead. It's not important for me to race him there, but if I do get there I won't let just anyone go. Ulf Ohlsson with Disco Volante could be a good one to sit behind. I would think that Ohlsson would race him on the front if he gets there" says Pöllänen.

The passing lane - a problem?
Åbytravet has a passing lane - an open stretch - on the inside down the stretch and with the scenario mentioned Västerbo Grosbois could get another victory using the passing lane same and pass on the inside. The trainer sounds a bit concerned though. Last time Västerbo Grosbois tried the passing lane at Åbytravet he hesitated as he finsihed third behind Explosive Merlot and Magic Twin. That was in the middle of May last year.
"The passing lane could be a problem. He's tried it once and I felt he didn't go all he could. But it's hard to speculate, we'll see what happens and which tactics I'll use".
After his win in the end of December you said he's not in form. Not bad still winning on V75. How did he feel when he took his second straight win at Solvalla on January 19th?
"In his last start I felt that he was in form. We still got a bit to go to get to back to the form he had last summer. He's really on right track though after a little break last fall. After the V75 final in the end of September I told the owners that the need a month off. Then we trained him back down again and he was sluggish in the first two starts back. He won his third start back due to him having such a high capacity. In his last start I felt that he was back to his old self again".
How is Västerbo Grosbois to work with?
"He's the sweetest horse you can imagine and he loves being out with his buddies in the field. We're stabled right at the track, Gävle, and even though he's eight years old he's so happy on the racetrack. He both feels and looks like a king. Like he owns the track. Jogging on the back track he can be very uninspired and lazy".
How does he feel in training going into this start?
"I trained him last Friday and he felt super, so there's nothing to worry about".