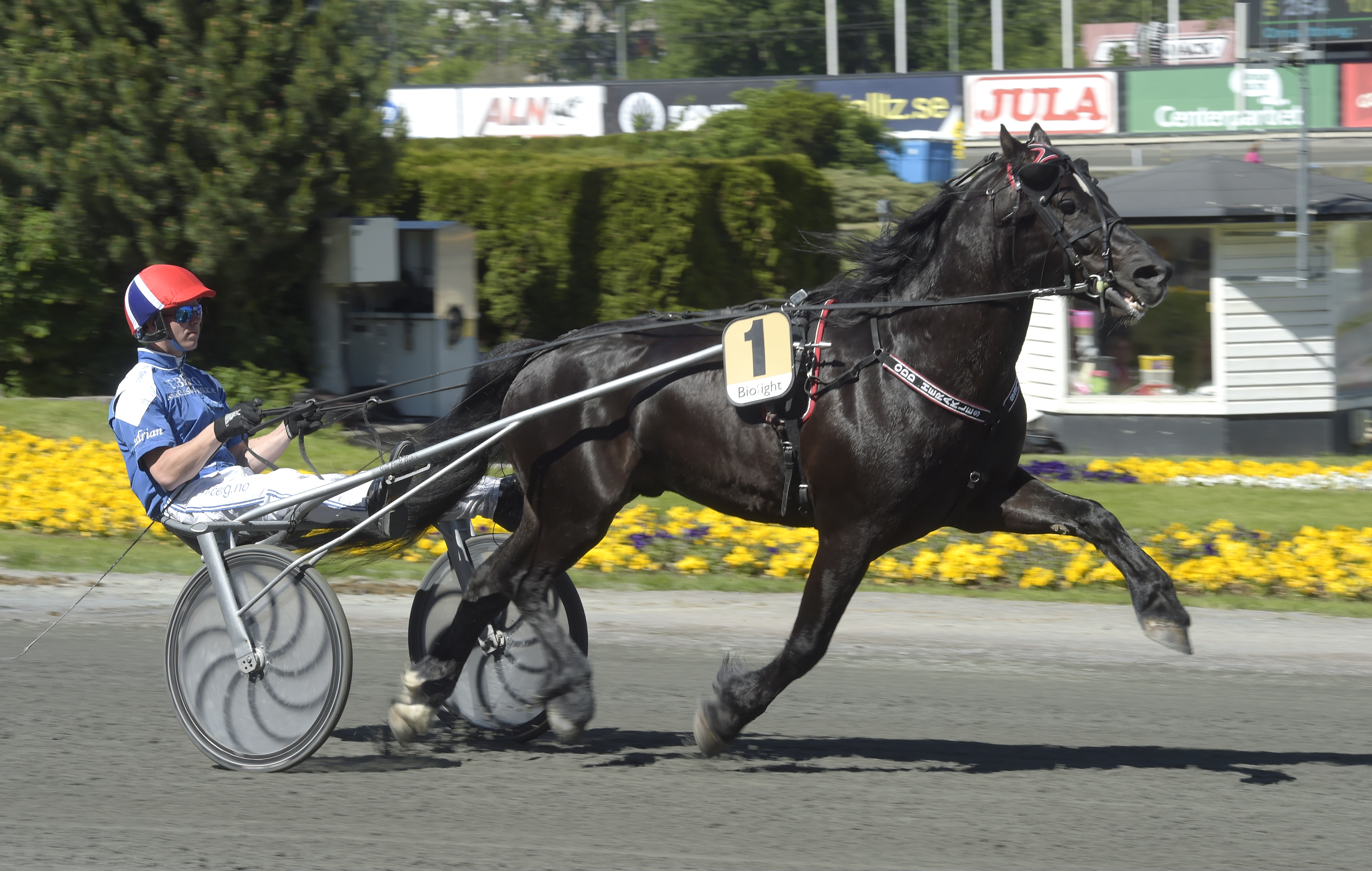 Odd Herakles could be number one in the world right now amongst coldbloods.
The nine year old from Norway sprinted to a second place in Finland last weekend after a tough trip and he is the given favorite in Unionskampen at Färjestad.
"We will come optimistic to Karlstad on Saturday" says trainer Lars O Romtveit.

For the 14th time Swedish and Norwegian coldbloods will face off in an international match at Färjestad on Saturday.
Unionstravet is the headline for the day and the featured race belongs to the coldblood race.
V75®-4 is Unionskampen, 2,140 meters for the coldblood elite with SEK 300,000 to the winner.
On paper it looks like Team Sweden has an advantage in many of the warmblood races. In the coldblood race, Norway dominates in the picks.
Nine year old Odd Herakles took over as the best Norwegian coldblood trotter last year and this year he has held his position on home turf with wins in the Norwegian Championships and Alm Svarten's race.
He's been plagued by bad luck with post positions in both Sweden and Finland this year. In Elitkampen at Solvalla he started from post ten and in Bollnästravets Elitsprint he had post twelve back in early August.
In the Nordic Championships in Turku, Finland last Saturday Odd Herakles finished a close second after having to start from post eleven behind the gate.
"Bad posts, yes. That's what's been so terrible for this horse. All the good horses he's raced against from all these bad post positions. He's gotten many tough trips but he just seems to shake it off. He's been in good form for a long time now, both last year as well as this, without any exceptions. He's been fantastic. Quite an adventure" says trainer Lars O Romtveit.

Solberg aggressive
Two starts ago he won a sprint race at Bollnäs. Tom Erik Solberg took a shot as the car left the field and went full speed ahead along the outside fence from post twelve. Odd Herakles got to show off his incredible speed and he trotted the first turn in 1:18 speed, four wide and took over the lead after 600 meters.
He trotted the first kilometer in 1:19 and down the stretch he managed to keep Roli Eld behind him.
"Yes, that was pretty fantastic against good horses like that. He was impressive in Finland too after a troublesome trip where Smedheim Solan got in his way in the last turn" says Lars O Romtveit.

1:15 speed last 500 meters
The Finnish horse Tähen Toiviomus won the Nordic Championship after leading from start to finish.
Odd Herakles was sitting way back in the rear of the field and had to advance three wide during the last kilometer.
"He had to go around a horse and was out four wide in the last turn. Herakles fought tough down the stretch and lost in a photo finish against a good horse. My driver said he had trotted 1:15 speed the last 500 meters and he was out wide the entire turn".
"His last start indicates that we can expect another good effort this Saturday at Färjestad too" says Lars O Romtveit.

Full speed out of the gate
Fellow Norwegian Roli Eld from the Frode Hamre stable will be a tough opponent unless Adrian Solberg Akselsen gets locked in from his inside post position.
Odd Herakles is very quick out of the gate and has raced best in the lead so driver Tom Erik Solberg knows which tactics to use.
It was in Trondheim Odd Herakles introduced himself to the public when he won Tröndelagspokalen easily and beat Månprinsen A.M. from the lead.
"We have raced him in the toughest races since he was four years old and he has turned into a complete and versatile horse who races well on all distances and regardless of the trip he's given" says Romtveit.
Along with the increased success Odd Herakles has also become more and more popular among the breeders. This nine year has advertised himself and gone from four mares bred his first year to 80 last year and 70 this year.
"We will travel early Saturday morning, it's a four hour trip. After his last start in Finland he's been happy and has been eating and drinking well. He spent many hours on the road for that race but he's so tough that I hope this won't be a problem either".
What do you have to say to the bettors about Odd Herakles' chances in Unionskampen?
"We think it looks very good, at least this early in the week and we'll come optimistic. He races the way he always does, barefoot, with a pull down bridle and in an American sulky" says a pleased Lars O Romtveit.