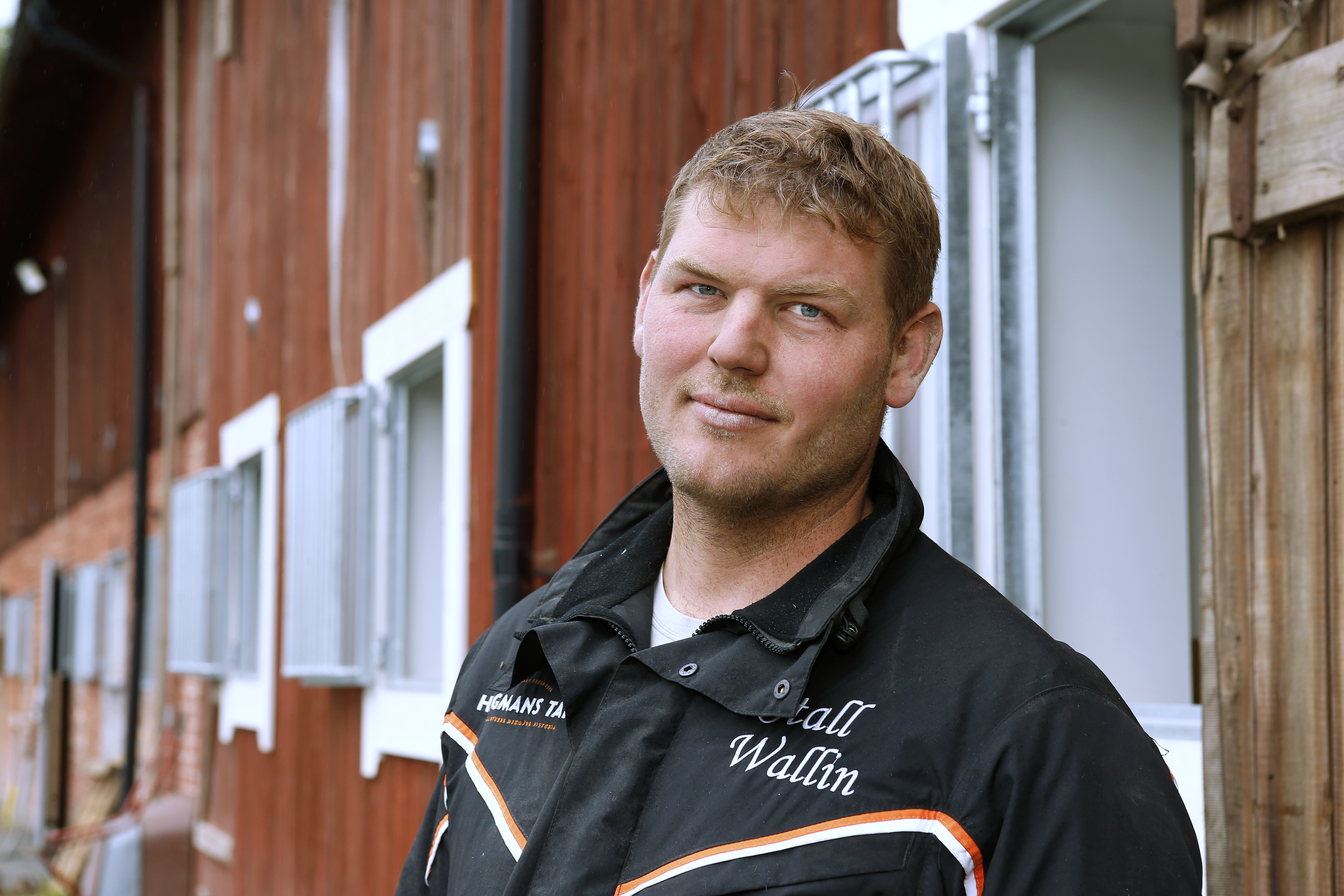 He has gone from nowhere to top 20 in the country in five years.
Fredrik Wallin has really had a breakthrough year in 2019.
"It feels awesome. The goal is now to reach SEK 10 million before the year is over" says Wallin who has three horses racing on V75® at his home track Gävle this Saturday.

He became a professional trainer in 2014.

Five years later Fredrik Wallin is in 16th place in the standings among the country's trainers after a phenomenal season with SEK 9.5 million in earnings.

Half of that amount is credited to the star of the stable, four year old mare Activated.

"She's been fantastic, but even without her earnings we have doubled last year's result. That's something I'm very pleased with" says Wallin who currently trains 54 horses.

Half of these are yearlings and two year olds so his results have been achieved in only 238 starts, which is fewer than everyone else on the top 20 list.

Why have you been so successful this year?

"The biggest different is that my horses have been healthy all year. We have also been able to increase the quality thanks to my owners who have been willing to invest".

Why have they been healthier this year, have you changed something or just been lucky?

"I changed how we bring the two year olds in to the racehorse barn. We used to do it in May and pretty much all the race horses used to get sick. No big deal but they lost some time in the summer. This year we did it already in January, which meant they got the reaction earlier and it didn't affect them in the same way".

There was obviously a reaction though. Wallin stable started the year with 20 winless starts before things turned in the end of March.

The first big bang was when Activated won the Queen's Trophy in May and the next big check was won in Stochampionatet two months later.

But aside from these two massive contributions the stable made another SEK 6 million and the most recent stake win came when two year old filly Sayonara won Svampen a month ago. That's when Wallin realized it might be possible to reach that magical number.

"I keep looking at my numbers all the time, I have no problems admitting that. You have to try to improve and money is a good way of measuring success. The last SEK 500,000 might be hard to earn, but we will give it our best try".

But that is not the reason why Activated is being prepared for her last start of the year, Criterium Continental at Vincennes on December 22. A win there would immediately make the trainer achieve his goal, but to do so she will have to defeat both the Prix d'Amerique favorite Face Time Bourbon and the Swedish phenom Campo Bahia.

"It will be such a cool race and I can't wait to see her at Vincennes. There are no more races for her against the four year old mares, which means she will have to face the best horses out there so why not start right away. It will be a good gauge on how she handles the trip and the track itself" says Wallin who hasn't been shy to try his best horses on the French national arena. For example Inga In Heaven finished sixth in Criterium Continental two years ago.

"I like it in France, I like Vincennes and how they drive down there. There's more speed and not at all like in Sweden where it's all tactics and where post positions determine too much of the outcome. In total I will have five horses in France this winter, to train and to race".

Too energetic to put away for the winter

Bad luck just in the post position draw is something that Loser On Loser (V75®-6) suffered as she will have to take on older foes in the bronze division from post 12.

"She hasn't had any luck with the draws all year. For her it's extra unfortunate since she doesn't like to go too wide in the last turn. She gets a bit wobbly and pacy then. In the Breeders Crown final she had to sick-sack between the inside and the two path and then she finished very well".

Will she be in the same form on Saturday?

"I believe so. The thought was to put her away for the winter but when I went over her with my vet she was too energetic and too sound to  put away just yet. So we decided to make a couple more starts".

"I'm not giving up, but she needs tons of luck from there. I'd like to see her driven conservatively and if things open up she will beat many of them down the stretch. The forecast is calling for rain this week and then it's supposed to freeze on Saturday so since her feet are sensitive that means we might have to race her with shoes, should the track be frozen".

A little more luck with draw did Livi Othella H.M. (V75-2) have and it looks like she could get to the lead.

"I agree. But I won't get involved in the tactics, that's all up to Erik (Adielsson) to decide. She has only raced in the lead once and then I had her too light upfront so she made a break. I will change her bridle from blinkers to a can't see back to give Erik the option to race her on the front if he wants too. I think she needs to be able to see her opponents if she will go on the front".

How is her form?

"On it's way up. She's a filly who might not look all that great at all times but she tries hard and she has crossed the wire without having to go all out two times in a row now".

"Another step up in form"

Wallin says his best chance on Saturday is Dusktodawn Sisu in the same race. A six year old mare who has made three starts in his training.

"Normally I don't want more older racehorses, I want to focus on the young ones. But this was a pleasant exception. At home she can be a bit on the clumsy side but in the races she's been very tough".

"No, I trained her at the track once before she made her first start for me and she impressed me. She likes training on our uphill track which has made her both stronger and sounder. When I drove her myself two starts ago she felt great, but got sore in a hind foot and got on the right line hard. That made us have to go easy on her in between starts and she had pretty much just rested before her last start".

Does that mean her form will be even better now?

"Yes. She was very good in training today (Monday) so I count on her taking another step up in form. She will probably race with shoes behind just like she did in her last start. She can race barefoot upfront even if the track would be a bit frozen".

Is she a mare that could be raced first up?

"Not impossible. But her best feature is her speed so if she can sit until the last 300 or 400 meters she's very speedy".

What is the goal for the Wallin stable for next year?

"You can't expect to make as much money as we have this year, it would take twice as many racehorses for that. If we can make half of what we have made this year, then I'll be happy".