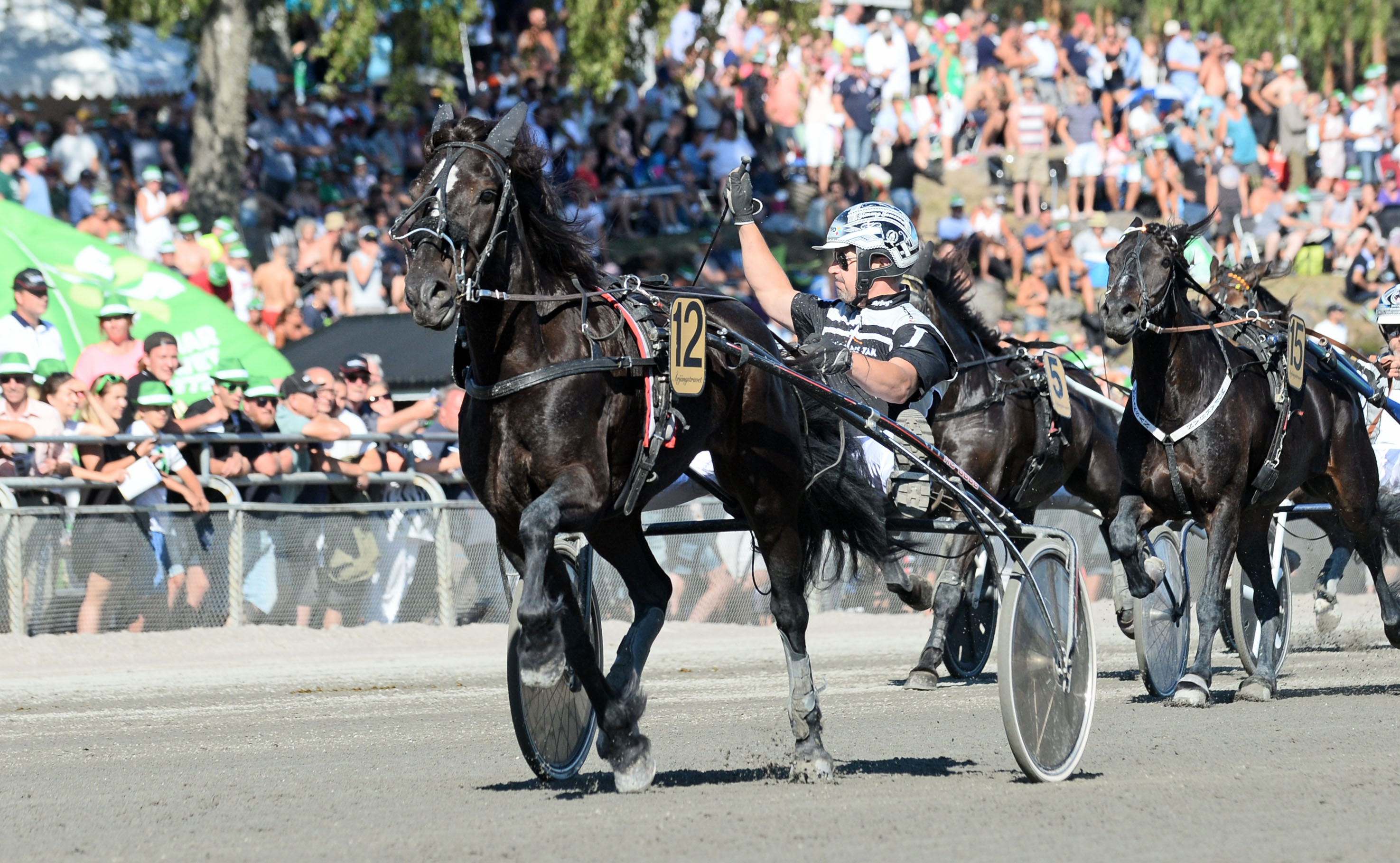 Granetta is one of the better coldbloods at Bergsåker.
But the six year old mare's chances of winning the fourth leg of V75® on Wednesday aren't very big.
At least according to driver Jimmy Jonsson.
"We lay lower than a sunken submarine this time".

There will be no V86® this week due to the national holiday on May 1. Afternoon racing with V75® from Bergsåker in Sundsvall is on menu on Wednesday instead.
This will be the third consecutive year that Bergsåker will host V75 on May 1. This year the coldbloods are scheduled to go as V75-4. It's a 1,640 meter sprint race where mares will get a 20 meter head start on the horses and geldings.
The Alf Jonsson trained mare Granetta finished fifth in last year's Swedish Championships behind Månprinsen A.M. and raced very well despite making a break.
The six year old mare fits this race perfectly with her earnings of SEK 978,000.
Driver Jimmy Jonsson reminds us that she hasn't raced raced for quite some time.
"Granetta was put away in September last year and was off for a long time and she put some weight back on after a pretty tough year. I'm sure she has a good year in front of her but today I think she'll have a hard time with these horses who are in race shape" says Jimmy.
Granetta has only trained slow and hasn't seen a race track for seven months. The plan is for her to race back into shape again.
Jimmy Jonsson:
"I haven't trained her at the track or trained her fast at all so she's not in that good form yet. I'd be very surprised if she can do more than maybe get some money in here. The plan is to get to the pylons and just give her a race. No, we'll lay lower than a sunken submarine this time".

Jimmy Jonsson is working as the assistant trainer for the Norwegian trainer Oystein Tjomsland in his Sundsvall stable.
His dad Alf Jonsson is still training horses, 71 years old, and Granetta is one of several nice trotters that he's trained since becoming an amateur trainer after retiring.
"Dad is on top and still works, he just bought a yearling too. I live close to where his horses are so I help him with shoeing and training sometimes. But he does everything himself on a daily basis" says Jimmy.
After a four year old campaign where she made SEK 360,000, Granetta developed further. Last year as a five year old she won Erik Persson Memorial in Årjäng in July, a final of dubbelcupen. In August she raced in the Swedish Championships where she finished fifth with a break mid race.
"She set two national records last year but her best race was the Swedish Championships. She made a break on the backside but came back to finish fifth behind Månprinsen. So she showed everyone that she's one of the better mares in the country" he says.

It will be tough to win in her return you say. Last year she returned after a long break over the winter and when she came out she won right away at Dannero in late March.
"Yes and she set a Swedish record that day too. But there's a big difference now. She's made much more money and she's in a much tougher class now".
The race on Wednesday is a high class field. Mares have an advantage and two mares stand out if we don't count Granetta. Do you think a mare will win?
"I think so yes. I'm very impressed by 2 Rus Can, she was superb in Romme in her last start. Same thing with 1 Torpa Olea who race really well and already has five starts this year. Out of the horses and geldings I think 13 Vill Solen is the best. Jan-Olov Persson has a couple good ones in there too. 8 Järvsöodin might not be the fastest one but he's a grinder as strong as anyone".
Finally. Alf Jonsson has a real talent, the three year old coldblood Tekno Jerven who in his last start won a race for three year olds in Bollnäs with you driving where he won in 1:28.6 over 2,680 meters.
"Yes, wow. We are very pleased with him. He's one of the better three year olds in the country and we are hoping to race him in the bigger three year old races this summer".