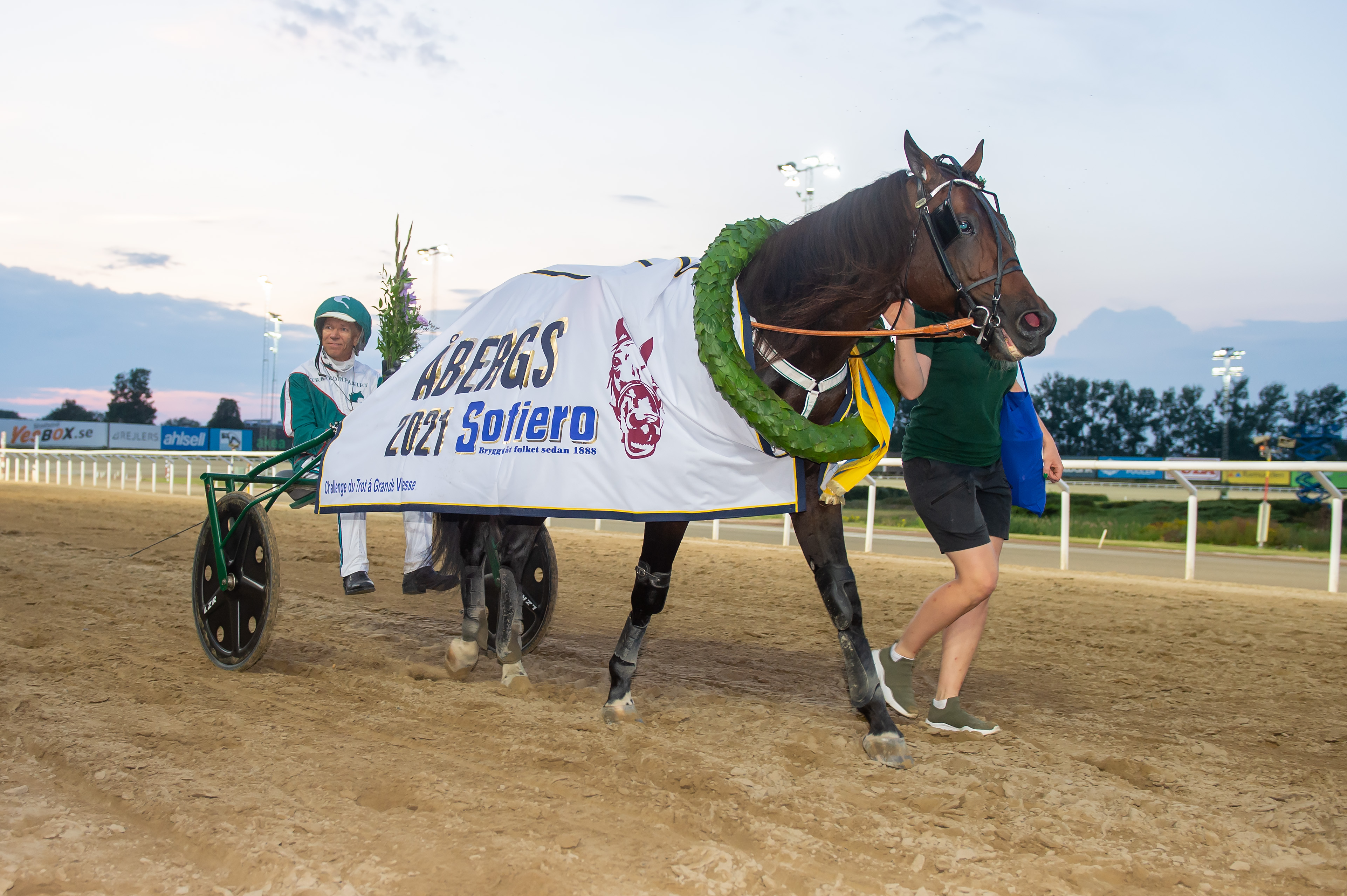 V75®: "Who's Who is a completely different horse this year - much better"

He has already won two races with at least SEK 1 million to the winner and on Saturday he is chasing his third straight big title.
Who's Who - who finished second in last year's Åby Stora Pris - is a hot candidate for the win worth SEK 1.5 million in the star-studded race.
"He's a completely different horse compared to last year. It was good of him to come in second place then, but he is much better this year" says trainer Pasi Aikio.

Åby has put together a great race that concludes the V75 card on Saturday. It's time for the classic Åby Stora Pris which nowadays is an endurance test over 3,140 meters. The race has attracted several international star trotters such as the French horse Ce Bello Romain and representing Italy is the four-year-old Bengurion Jet, who was very impressive in his most recent start. But the Swedish steel isn't bad either, with several of the country's best horses behind the gate. One of them is Who's Who, the charismatic star trotter who was toying with his opponents in Hugo Åbergs Memorial in his last start. The seven-year-old stallion won Norrbottens Stora Pris two starts ago and in the start prior he finished second in Harper Hanovers race at Solvalla's Elitlopp weekend. He won Hugo Åbergs very easily after having left quickly and being able to set a low pace on the lead.
"6 Who's Who (V75-7) crossed the finish line without being tired in Hugo Åbergs and that was a perfect setup going into this race on Saturday. I'm not too disappointed that he didn't trot 1:08, the most important thing was the way he did it. It was a good race for him, not having to get tired" says Pasi Aikio.
"He came out of that start well and has trained as usual afterward. He feels very good and I can tell that he is in top form now. I trained him today (Monday) and he felt good and sharp. He just trained some slower intervals and usually, he gets some mixed up training on the sand track, the uphill, and on the trail in the forest.
What do you say about his ability to leave, which was news for many people when he did so in Hugo Åbergs?
"We knew he could leave and even if he hadn't shown the general public that, it was no surprise to us. I knew that Örjan would let him leave and try to race him in the lead when he had the post position he had".

"Hasn't learned to read yet - but will probably come too"
Describe Who's Who as an individual and how his season has been so far?
"It has been a fantastic season so far and I can't be anything but pleased. You work to get a horse like this and I might never get one like him in my life again. The win in Hugo Åbergs was huge and just the fact that he has never lost at Jägersro is cool".
"Who's Who is a fantastic individual in so many ways. He is so intelligent and mentally he is incredible. The only thing he hasn't learned to do is to read, but that will probably come too, haha. He knows exactly what's going on around him" says Pasi.

"He is much better this year - definitely has a chance to win"
On Saturday Who's Who can win another rich race as he will be one of the favorites in Åby Stora Pris. Örjan Kihlström is as usual in the sulky behind the former Derby winner, whose earnings now have reached SEK 11.6 million. Last year Who's Who finished second to Moni Viking in Åby Stora Pris and trainer Aikio is much more optimistic this year.
"He's a completely different horse this year compared to last year. Last year he had strangles before the season started and wasn't prepared optimally. Going into this year I gave him proper winter training and he is much better this year. It was good of him to come in second considering the preparations last year, but going into this year he got a lot of training in the winter and has been able to show how good he is".
"The post position is OK, it could have been a lot worse and everyone saw that the horse can leave if Örjans wants to. But he is in no way dependant on racing in the lead and we will see how Örjan races him now that it's a three-kilometer race".
"There are many good horses and several good stayers in the race and it's fun to be in a race like this. I always have a good feeling racing Who's Who and he almost never races badly. When he has done so, there has always been a logical explanation. With the right trip, he definitely has a chance to win. No changes, he will race the way he usually does in a blind bridle, barefoot all around, with stay-in earplugs and in an American sulky again" says Pasi Aikio.
You have one more V75 starter on Saturday, Vicar in the fourth leg. What are his chances?
"7 Vicar (V75-4) is very consistent and almost never races badly. In his last start, he got stuck behind dull cover and got hindered a bit. But he raced well then too. Now he has post position seven behind the gate which is ice cold and he needs luck and a hot pace to get into the race. We will try him barefoot upfront this time to see if we can get some more speed out of him, we know he already has the strength. He raced that way before but this will be the first time this year going barefoot upfront. I have felt that he hasn't been ready for it before, but now he feels stronger and tougher so we should be able to get the most out of it".