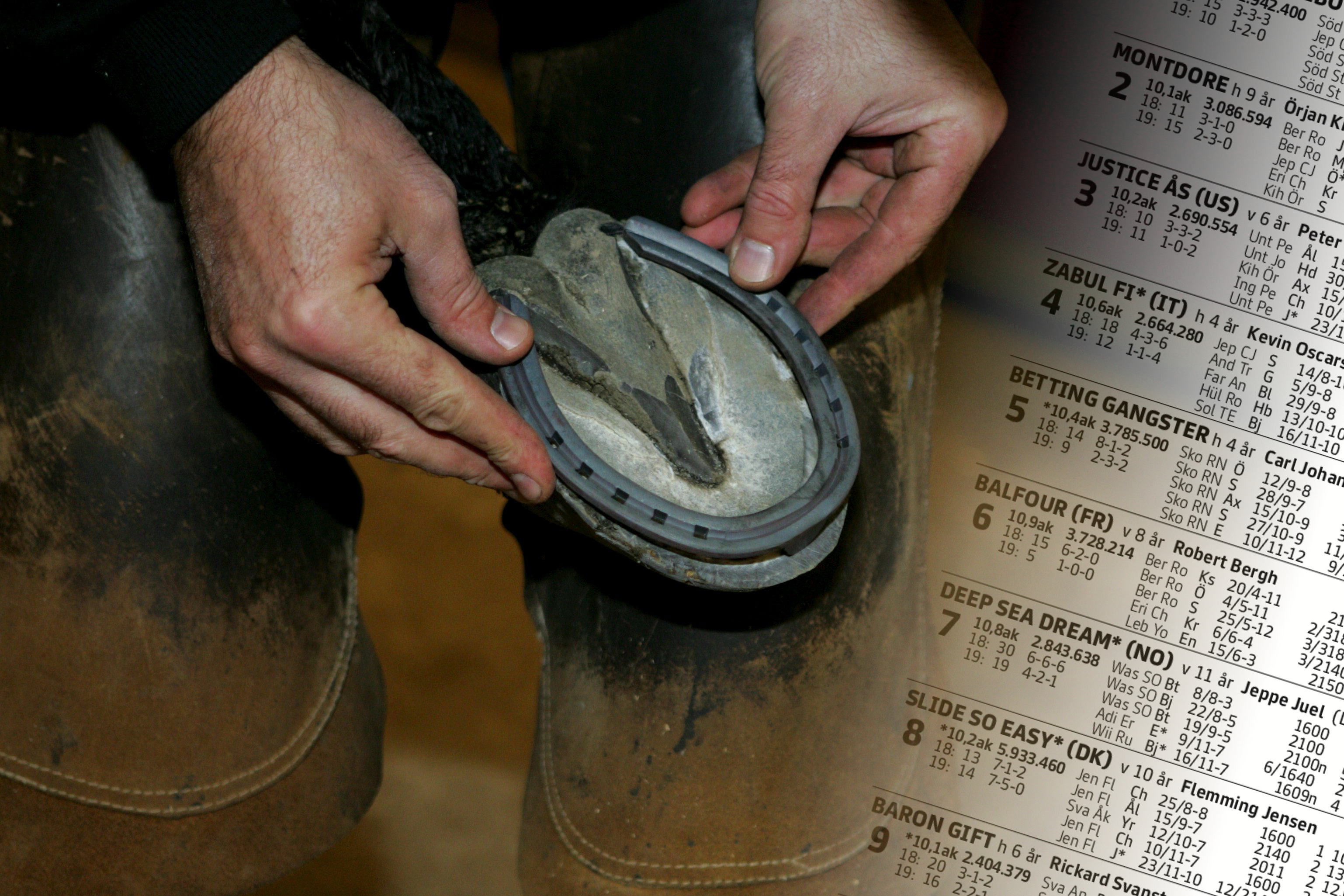 V75®: Winter - meaning shoes will have to stay on

Shoes on during the month of Christmas.
The prohibition to race barefoot is in effect in Sweden and during Åby's V75® races on Saturday all horses must race with shoes on their feet.
What is there to think of as a bettor?

For the fifth consecutive winter it's shoes on for all horses racing at every racetrack in Sweden as of December 1. A general rule that prohibits barefoot racing is in effect until and including the last of February.
The forecast calls for sunny weather and temperatures above zero degrees Celsius in the Gothenburg area this Saturday.
The fact that Åby this time of the year can offer a fast, summer-like track doesn't matter.
The line has to be drown somewhere.
"There really isn't anyone who has a problem with the prohibition down here. Quite the contrary, many trainers are very positive about it. Of course it's a bigger change for horses who usually race barefoot. But that's just how it is. Some horses deal with it better than others" says Kristofer Jakobsson at the Åby race office.
Jakobsson recently took on the task as the handicapper in the racetrack program.
He reminds us that Åby has a double passing lane.
"The fact that we have the passing lane down the stretch means more activity in the races compared to other tracks. I think we will see that on Saturday".

A warning for the strong horse
The barefoot prohibition gives an advantage to horses who usually race with shoes on. On the flip side the 'barefoot specialists' are at a disadvantage.
Kristofer Jakobsson will go short in two of the V75® races on his ticket in the track program.
Petri Puro trainee 1 Martin de Bos with Peter Ingves driving has shown good form in his recent starts and is left alone on the ticket in the silver division (V75-1) on Saturday.
"In that particular race there's a dangerous long shot just because of this barefoot rule. 11 Pacific Face would normally be ranked a lot lower but he could have an advantage on Saturday. He always races with shoes and he's a very strong horse. It gets a bit easier for Pacific Face now that everyone has to race with shoes and the speed isn't that high in the races" he says.
He still only goes with one horse in the first V75 leg - but not without doubts.
"Yes I think Martin de Bos will win anyway. But you could move Pacific Face up in the ranks a bit. I have him ranked second".

"Not really a handicapper"
Kristofer Jakobsson is working in the race office, responsible for the owners and he also does the interviews in the winner circle as well as in Åby's own TV channel at the track.
But he doesn't want to call himself a handicapper.
"No I'm not really a handicapper. But this is being complimented by the podcast me and Sören Englund does every week. Åby's very own podcast is called "Travtjöt" and we do a new episode before every race day the track has, where we go through the races one by one and on Wednesday Robert Bergh will be our guest" says Jakobsson.
Your other singled out horse is in the bronze division (V75-7) and that is 2 That's Art. Peter Untersteiner does the training and his son Johan will do the driving. What is the motivation?
"That's Art was very good in his last start where he beat Höwings Unbeatable despite being parked on the outside. I thought he looked very powerful crossing the wire and...well I just think he will win this. That's Art won two in a row early last year here at Åby and you could hear that it was a horse that Peter thought highly of".
What is the Saturday highlight as far as the sport goes?
"Legolas Memorial, gold division (V75-6) is the race that I look forward to the most. It might not be the best edition of the race this year but it is wide open on paper. Jerry Riordan's four year old 5 Betting Gangster will make his first start against older horses. The fact that Flemming Jensen's 8 Slide So Easy has a second place in the Yonkers International showing in the program commands respect. Both 9 Baron Gift and 10 Mack Dragan are top trotters who both have had a great year and they are lurking behind the favorites" says Kristofer Jakobsson to wrap it up.